Clive Barker has gifted the world so much wondrous horror in the form of literature it was only natural he’d start in on the film industry. At first he wrote screenplays for movies, then, unhappy with the way others translated his work to the screen, he started his directing career in 1987 with Hellraiser— one of the greatest horrors ever made!

Then came Nightbreed. Sadly, as a commercial venture, the movie flopped at the box office, inexplicably to Father Gore. Why? Adapted from his novel Cabal, the story touches on urbanism through a lens of humans v. monsters. It’s such an important movie in the way it explores intolerance, difference, and how societal institutions only serve to perpetuate these types of divides between a city’s citizens.

The separation between Barker’s mythical city of Midian and that of Calgary provides the author plenty of figurative space in which to examine how one city can be home to various other cities or communities within it. Moreover, the division of two cities within one larger city structure is a landscape of urban/social decay, inequalities of all kinds, and racism. Also one not unfamiliar to those of us in 2018 watching the Western world fall apart from white nationalism.

“It’s where the monsters go, it takes away the pain.”

In big cities there are smaller, hidden populations— hidden communities, hidden people, hidden culture. Minority groups usually get disregarded by not just citizens, also the state itself. They’re pushed into these hidden spaces. Such is the case with the Night Breed, who’ve been relegated to the outer edges of the city, in their own city: a graveyard. Further than that, they’re literally underground, below the surface, as if dust swept under the rug. The cemetery itself is like a border, demarcating the edges of the city and the edges of Midian.

We see how Midian operates by different laws than the big city. Same as real life, there are usually different rules— usually unwritten— for those in different spaces, whether racial space, economic space, social space, et cetera. Most people considered “natural” are unaware Midian is real, believing it an “invented city.” In parallel, many ignorant whites consider these other racial/economic/social spaces of real cities as imaginary, unwilling to believe other citizens of a city are treated differently than themselves, not ready/able to accept the presence of their own privilege versus someone without them.

This attitude is exemplified in the line: “Monsters don‘t exist.” We know they do, in context of the movie. This is a way of excluding oneself from being a monster, to believe they don’t exist. It’s like saying, in real life, there are no actual poor people, there are no homeless, there are no (insert other marginalised community here)— an exclusionary device to separate us from communities we believe are beneath us, just as the ‘natural’ people in Barker’s movie refuse to believe Midian is a physical space. This also goes towards perpetuating a theme of humanity as destructive, in contrast with the monsters who are gentle, except when forced to violence in self-defence.

“There’s a face beneath this face”

Nightbreed reveals the darker side of humanity, using the supposed monsters as a juxtaposition against one specific human character: Dr. Philip K. Decker (played to mad delight by David Cronenberg). We see Decker as a white guy severely concerned with urban decay, as well as the social decay inherently connected. He kills people in order to scapegoat Midian and the Night Breed. He explains his hatred for the other population within his city, not unlike the rhetoric you’d hear from a neo-Nazi: “Families like cesspools, filth making filth making filth.”
As a doctor, Decker is part of the ideological state apparatus. This is significant considering he uses his status as a cog of the ISA in order to influence the police and state violence, which are part of the repressive state apparatus. Barker touches on something deeply relevant to marginalised communities, particularly those including people of colour.

One of the worries many POC and women have is the ISA(s) and RSA(s) working in conjunction. For instance, many liberals foolishly think gun control should involve doctors/psychiatrists relating psychopathy(etc) to state agencies, whether police or federal government, an incredibly scary notion. Because, as we see with Decker, those who are part of the ISA have influence over members of the RSA. Together they’re capable of turning social scapegoating into social violence.

Looking back at Nightbreed there are many symbolic connections to real life discrimination and violence. Like when the police are led to Midian using military grade warfare against its citizens, reminiscent of how, in 1985, Philly police dropped a bomb on a row house in their own city because of conflicts with the black liberation group MOVE. Or, we can parallel Dr. Decker’s quest to blame crimes on the Night Breed to events over the past few years since Donald Drumpf became POTUS where white idiots have tried blaming Black Lives Matter for spray painting churches and police stations, hoping to incite further racial tension(s). The best works of cinema transcend medium— absolutely the case here. 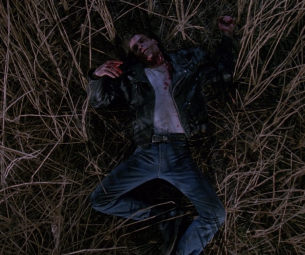 “What is below stays below— that is the law.”

The final shot before the credits takes the lead characters and maps them into a hieroglyph on the walls of Midian below the cemetery. This is the perfect way for Barker to cap off Nightbreed, effectively superimposing the Night Breed themselves into a form of natural history. Whereas they’re considered by the city as non-natural, their resilience and their survival in the face of utter intolerance proves them to be more human than any of the human beings who try destroying them. This hieroglyphics shot is a cherry on top of all the movie’s compelling commentary.

Perhaps a final note of interest is Barker, for someone who’s not an actual Christian, finds constant inspiration in the Bible and other religious texts. The city of Midian is named after a city mentioned in the Torah and Qur’an, destroyed in similar fashion as Sodom and Gomorrah. By virtue of the name’s origins, Nightbreed‘s Midian becomes a place where people are cast off, a decision determined by those in power and forced upon those without any— the bourgeois class of the city, like God, cruelly decide the fate of those who are outside perceived social (or religious) boundaries.

Regardless of how one interprets the movie, it’s a story about intolerance infiltrating many aspects of our modern lives. Barker has always been adept at representing the Other, whether in terms of sexual preference, social status, or race. As a gay man himself, he surely understands the brutal ways our society divides people, and then how people further perpetuate the societal divide via hate and ignorance.
Nightbreed is a powerful masterpiece of urban horror. When people say the ’90s were bad for horror, they a) don’t know they’re talking about, and b) have clearly forgotten this sweet, grisly gem.