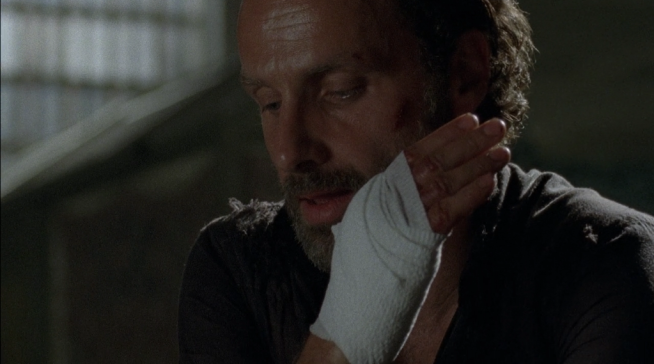 After the reveal of last episode, Carol (Melissa McBride) is going on a run with Rick (Andrew Lincoln). They need to find food. Or is there something else going on, now that he knows her secret? Before leaving, Carol talks with young Lizzie (Brighton Sharbino); the girl’s worldview is drastically different from that of the adults. It might cause problem later on down the road. Right now, she’s sheltered in the walls of the prison, still with her sister and others. For her part, Carol tries to give the girl pointers on survival.
Although it’s like she knows she might not come back from the road. And I don’t know if Carol’s morality is in place where she’s the best one to listen to, about anything.
Then again, Rick seems to be struggle with a moral decision all of his own.

Michonne (Danai Gurira), Bob (Lawrence Gilliard Jr), Tyreese (Chad Coleman), and Daryl (Norman Reedus) are searching for a new vehicle after having to abandon the first one. Tyreese isn’t as hopeful as before, losing time on their trip makes it less likely people will survive at the prison.
When Rick and Carol get on the road themselves, it’s obvious things are not well between them. He doesn’t trust her anymore, not like he once did. She thinks it was a lost cause, that they were “a threat” to the rest of them. Except the sickness still spread, so I’m not sure if her reasoning is altogether sound. Certainly doesn’t impress Rick much.
Michonne and Daryl’s crew poke around for a new battery to go in a decent vehicle they find at a gas station. When they try getting inside, the place covered in branches and leaves, Tyreese goes a little wild hacking away. This brings out the walkers in full force, hiding beneath the brush. They manage to take care of things, though it could’ve gone a hell of a lot smoother.
Rick and Carol come across two young people in a house where they’re scavenging, Sam (Robin Lord Taylor) and Ana (Brina Palencia). Sam has a dislocated shoulder, which Carol helps set again. They’re both nice, if not a bit naive; Ana also has a badly healed leg from a nasty break. Such a juxtaposed pair. Yet Rick busts out the fabled three questions, preparing to possibly take the young couple in at the prison. He sees fit to take them in after they scavenge more.
We figure out more about Bob, how he used to be an alcoholic. That’s why he almost took a bottle of wine when they were at the store, where Zach was killed. He blames himself. Daryl tells him plain: “That‘s bullshit.” Making clear that Bob is one of them; for good. And now they’ve got a car to head on further down the road. We see more of the divide between Rick and Carol, as if it seems to widen with every word they speak to one another. He’s mostly silent about what she did to Karen and David. She thinks he is a bit naive himself, about what life is like now in this new world. Above all, Carol is willing to accept things that Rick won’t, or at least isn’t ready to, not just yet. If ever.
Finally, the other group reaches the college where they search for medicine and any other supplies they’re able to carry. Bob picks himself up a few books; or did he find something else? They get tons of good stuff to take back, everything that was on their list. Hopefully it’ll help the prison recuperate and save a few lives. First, they’ve got to get out of the college alive. Bob puts himself and the others in a bit of danger over a bottle of booze, which doesn’t sit well with Daryl, particularly seeing as how he neglected getting any medication in favour of alcoholism.
Rick and Carol find Ana’s bloody leg on their way back to the house, so that’s one new person not coming back home with them. They can’t find Sam, either. Moreover, that divide between Rick and Carol widens, deeper and deeper. The pessimism in her overpowers any sense of humanity she feels, ready to drop anybody – even kill them – at a moment’s notice. Although in a way, I can’t blame her. Despite that she worries me.

When they’re about to go back, Rick tells Carol she isn’t coming back. He knows that when Tyreese discovers what she’s done, he’ll kill her. And the others won’t be pleased to find out, they won’t trust her, or feel safe.
And so she’s left out on the road: “I won‘t have you there,” says Rick. A harsh, horrifying decision. One I don’t altogether disagree with, honestly. He gives her a few supplies, they find her a car, and she’s on her own. 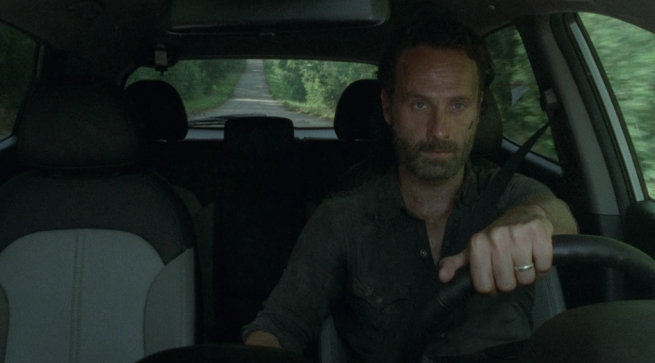 This episode is crushing in many ways. I truly feel for Bob, as a recovering alcoholic of many years myself. Can’t imagine dealing with the post-apocalypse landscape while drying out. Nasty. And Rick’s decision is one of the hardest he’s had to make to this point. But it never changes, never gets easier, does it?
“Internment” is up next. Plenty of juicy things to explore now.