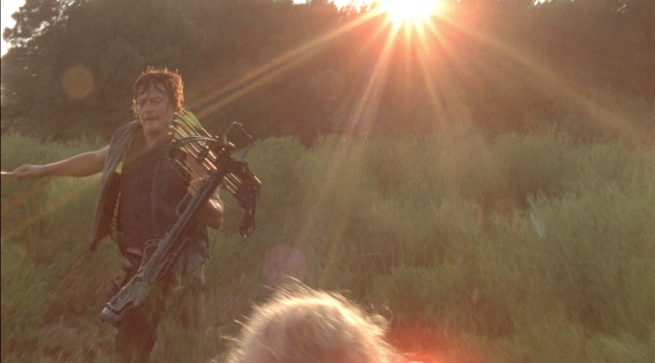 Beth (Emily Kinney) writes in her diary, when they came to the prison. She talks about it being a blessing, that they need a place to stay safe, where her father says they can grow crops and make a home. Waking up in her “own bed” for once in such a long, long time was a comfort.
All the while we watch her and Daryl (Norman Reedus) flee from the prison falling, through hordes of zombies. Again unsafe, so far from when she wrote that entry in her diary. So much has changed, and there’s no hope for safety, certainly not normalcy in sight.
Seeing her and Daryl on the road together is different, because they’re quite far apart in terms of character. I enjoy them both, but it’s an interesting juxtaposition, each coming from wildly different backgrounds. Also, she still holds onto a sense of hope, he seems to be letting his slip away into the darkness.
But Beth’s beginning to drown in the darkness, too.

We get a bit more hope when we see Tyreese (Chad Coleman) holding Judith close to his chest, walking through the woods. He’s also with Lizzie (Brighton Sharbino) and Mika (Kyle Kenedy), helping them survive. They have no place to stay, so having an infant who needs milk, cries, needs diaper changes, et cetera, ain’t the greatest for out there amongst the walkers. Still, the big man does his best with what they’ve got. I’d trust in him if I were a person on the road post-apocalypse.
Tyreese runs to help people screaming, leaving the girls with Judith momentarily. They’re brave little ladies. He finds a couple people fighting zombies by the train tracks. He helps kill them. It’s no use, though – the men are bitten, one dies immediately. Meanwhile, we see a creepy bit of Lizzie, who almost smothers the baby putting a hand over her mouth to keep the walkers from hearing her cries. Something isn’t right with that girl.
Oh, and what else? Carol (Melissa McBride) finds the girls and Judith in the woods. Tyreese, still unaware of what she did back at the prison, embraces her. Another slight bit of hope for the group. They hear from one of the bitten men there’s a “place up the tracks” that are taking people in, the first mentions of a place we’ll soon come to know well.

Elsewhere, Sasha (Sonequa Martin-Green), Maggie (Lauren Cohan), and Bob (Lawrence Gilliard Jr) are together on the road. Naturally Maggie wants to find Glenn (Steven Yeun), and neither of them want to split up any further. They’ve at least got each other, if that’s any comfort. Hard for Maggie to be separated from Glenn, particularly when he wasn’t exactly 100% yet, too. He needed time to rest then the prison fell so quick. Worse? They find the bus tipped over in the road, only the dead inside. Has her man died? Or is he out on the road like herself and the rest?
He’s actually still at the prison, left behind. And part of the place is blown to bits, so he’s literally stuck on an island of sorts. Only an assault rifle with him, all alone. That’s a scary fucking prospect right there, left at that vast building all by himself. Not a place I’d want to be. Possible walkers around every turn in the dark. Glenn’s faced with either staying there alone, or heading out on the road to find Maggie, the others. It’s a rock and a hard place kind of deal: stay, there’s nobody else; go, he may never find them. 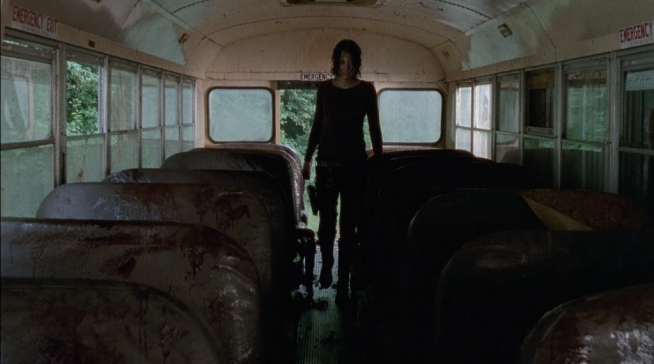 There’s one person still kicking around: Tara (Alanna Masterson). Still kicking herself about being with the Governor, for being a part of what he eventually did. And certainly Glenn’s wary of her presence, as well. She didn’t fire a shot during the battle, he discovers. He needs help and is willing to take Tara with him. Because they can’t stay in that place. He starts a distraction to draw the walkers towards a car fire. The both of them go, him wearing some riot gear leftovers, watching each other’s backs. This is the last of the prison, after all those months upon months of staying there, battling over it.
Not long later Glenn finds out Hershel’s dead. Devastating.
Tara agrees to go wherever they need to in order to find Maggie. But it won’t be easy. Soon enough, a truck stops at the side of the road. Out comes Sergeant Abraham Ford (Michael Cudlitz) and friends.

Next up is “Claimed” and we’re about to see a whole new set of characters, stories, and a journey towards that fabled place up the tracks.