Bishop (Michael Irby), Angel (Clayton Cardenas), Coco (Richard Cabral), EZ (J.D. Pardo) and the rest of the crew are partying at Vicky’s place, enjoying themselves with a few women and a bunch of drinks. Everybody’s enjoying themselves. At the same time, we see people on the border using the place for “target practise.” Mayans M.C. hasn’t strayed away from tackling immigration, which is a big part of what makes it different from Sons of Anarchy, alongside the general attention to Mexican biker culture. These people kill a man in cold blood, executing him on the road before police turn up, and it’s clear they treat it as a nationalist pastime. The cop who finds the body is a friend of the MC, so it’ll be interesting to see where this situation goes from here.
The next morning, Bishop and the boys are called to the crime scene where the mayor, Antonia, is kicking around, whom he knows pretty well— she has a “hot wife” apparently. She wants to talk to Bishop about the Oxycontin found. They’ve got some kind of agreement, seeing as how the bikers don’t mix with drugs. The mayor’s got struggles with the “greater good” between dealing with the Mayans and then the Galindo cartel on the other side. Can’t be easy. The club’s got to figure out who’s knocking off drug mules before things get worse. 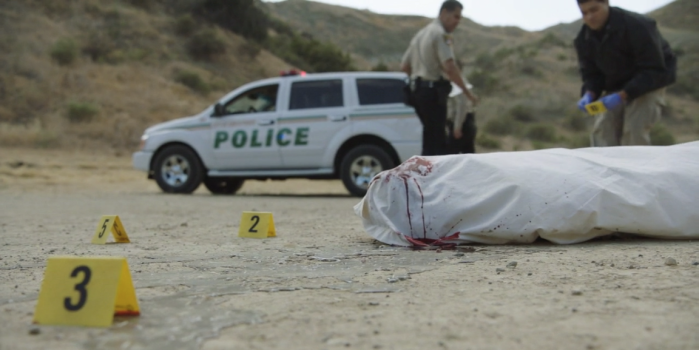 At the clubhouse, Marcus Alvarez (Emilio Rivera) talks with the prospect alone. He tells EZ things can get tricky when they let “blood sponsor blood,” which usually isn’t the case. He advises if things get messy, go to Bishop for guidance. He says to put the club before everything, hoping to see him patched in sooner than later. Angel’s always keeping an eye on his brother, just to make sure nothing sketchy’s going on with their rebel side dealings. Meanwhile, there’s something wrong with Coco, likely to do with his family. Could it be his mother?
The Mayans take a ride to see a bunch of rednecks. Bishop questions them about their possible involvement with the shooting at the border. And it was certainly these nasty motherfuckers, led by a tough lady named Alice. EZ sees a big dude and flashes back to jail, seeing the guy locked up in there with him. The club doesn’t get any info, but they keep a tail on all those hateful whites, knowing those people are responsible.
At the rebel camp, Adelita (Carla Baratta) looks after the baby. I wonder if she’s beginning to suspect Miguel Galindo (Danny Pino) has been using kids to keep tabs on their movement. At the Galindo home, Emily (Sarah Bolger) tries helping her husband— this situation’s making her a willing accomplice more than ever in Miguel’s business. She’s actively fighting against a good cause because her husband’s allowed their child to become a pawn. She advises turning the rebels “into the devil” as they’ve done with the cartel. And Miguel’s “youth group” are out there being corrupted this whole time.
Back at the clubhouse, the crew are wondering who the hell the big guy is exactly. A little later, EZ gets a visit from his dad Felipe (Edward James Olmos) updating him on their DEA situation quietly. Shit’s getting worse on that front, as Agent Kevin Jimenez (Maurice Compte) is forced by his superiors to push the prospect harder. Kevin also gets intel on Felipe, and we see he’s a “second cousin” to the family. When he talks to EZ, he finds the prospect refusing to do anything that’ll compromise Emily, no matter if he goes back to jail.

Coco meets his mother and sister, telling the latter she can’t use his name around town because it could cause dangerous problems. Turns out it’s not his sister, it’s actually his daughter. He tried to get her away from the family when she was born, yet things didn’t work out that way. They’ve been playing pretend and Grandma’s had enough of it finally, abruptly revealing the truth to her granddaughter, which sends the girl off running, jumping in a truck and offering the driver a blowjob to get her away from her insane family.
Emily gets advice from her mother-in-law Dita— either “know nothing and feel everything” or know it all and “feel nothing” if she’s going to survive. Dita’s chosen to live her life outside of the cartel circle, letting her husband Jose do his thing while she took care of the family. Now it’s Emily’s turn to choose her fate.
Kevin discovers “Felipe Reyes didn‘t exist before 1985,” which is the year the old man got married. There’s nothing in his past, only a social security number that traces back to a woman from El Paso who died in the same year, ’85. So, what’s the darkness in Felipe’s personal history? Was he military of some kind? Agent Jimenez is planning to use this as blackmail ammunition if the old guy won’t play ball, even if it makes him sick for having to do it.

The Mayans are hunting tonight. Vicky shows them a way onto the redneck family’s property. The lads sneak in, armed with the proper weaponry. EZ suggests ringing the doorbell. Then shots go off. Once things die down the Mayans head in to see everybody’s dead already, aside from Dennis, who’s running. Angel and the boys catch up to him. Dennis says the big guy Cole must’ve killed everybody.
In his garage, Felipe keeps bits of his old life, such as a birth certificate His real name’s Ignacio Cortina, born in February of 1951. Looks like he was born in Navojoa, in Sonora. In his secret box are pictures of the past, including one that definitely looks like a Polaroid from the army. His backstory’s compelling, it’ll be interesting to watch more of it unfold. What’s made Felipe hide his true identity for 33 years?
At the Fiesta de La Santa Madre (roughly the Feast of Saint Mary), Emily’s with Miguel, as they’re trying to make a public display in an effort to win over hearts and minds. Yet she has no idea what’s about to happen. Everybody starts screaming when the nun who’s been helping Adelita is found butchered in the square. The scene’s made to look like the rebels were the one to do it. In the chaos, everybody starts running, and Emily’s knocked over, trampled in the ground. A perfect image of the collateral damage in Miguel’s life, extending further with every horrible act he commits.

My personal favourite episode of the series so far. This is getting DAMN good, after an already solid start. “Uch/Opossum” is next time.