While we’re all loving Panos Cosmatos for his surreal and fascinating work as a director-writer, his father George P. Cosmatos gifted us several awesome slices of 1980s genre cinema – Of Unknown Origin, Rambo: First Blood Part II, Cobra, and Leviathan – plus one of the greatest Westerns on film, 1993’s classic Tombstone. The senior Cosmatos isn’t as psychedelic a filmmaker as his son, he’s more traditional. His movies are of a different breed.
In Of Unknown Origin, Cosmatos wraps a man v. nature story in layers, pushing it from creature feature-style horror into a movie on the horrors of modern existence. The concept of ‘the rat race’ is one that’s come along with the modern city itself, likening us to rodents in a lab rushing for the cheese in what’s ultimately a pointless pursuit. We all die. We can’t take our nice houses and cars and big corner offices into the grave with us.
Bart Hughes (Peter Weller) doesn’t see it that way, choosing to pursue a bourgeois life for him and his family at whatever cost necessary. During the process he destroys his home and nearly his marriage. Considering this was made in the ’80s, Bart represents the bourgeois class of America who, at the time, were being inundated with capitalism, consumerism, and materialism made to seem inherent in the American Dream.
That’s why Bart’s willing to do anything to get ahead.

“This isn’t a trust company, it’s the court of Louis XIV.” 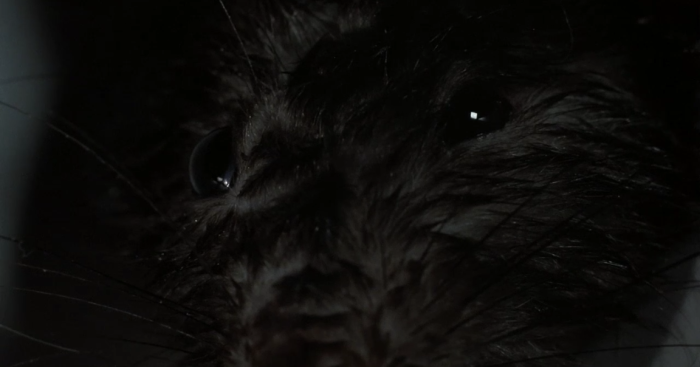 Of course the rat’s a metaphor. It’s also a very literal force in the movie, attacking Bart and tearing the house to bits. The most prevalent metaphor for the rat is, obviously, the whole concept of the rat race. As a symbol, the rat allows a metaphorical look at one businessman’s desperate attempts at/obsession with getting ahead economically, made to confront a rat taking on a human-like deviousness. Here, the food chain’s subverted, as Bart becomes prey to the rat as predator. Likewise, a cat brought in to help is devoured, becoming lower on the food chain than a rat as the natural order of things is totally rearranged. Likewise, Bart also exists on a financial food chain at work. He’s an executive at a financial trust and part of the bourgeois class, yet lower on the chain than partners at the firm. He lives in a brownstone but calls it a “dump,” laying bare ridiculous expectations of living standards by the upper class. Bart aspires to be a big Wall Street-type who wants for nothing. His encounter with the rat becomes a personification of the financial rat race.
In the rat race, the home becomes a battleground. The effects of too much work and an obsession with money come to bear on the home’s emotional and physical spaces alike. Just as Bart’s house falls apart in his fight with the rat, so does his work life and his personal life. Although we never see the repercussions in the aftermath of Bart’s wife and son returning home from vacation, there’s plenty of suggestion.
Capitalism, consumerism, and materialism erode our lives in lots of ways. Not the least of which is its affect on the individual and their family/relationships. These forces pull families apart, alter home life (parents working too much, one parenting working all the time while the other does the heavy lifting with the kids/dishes/etc), and generally disrupt and destroy.
For instance, Bart lies to his wife Meg (Shannon Tweed) when she arrives home – “I had a party” – and he’s probably not going to mention he kissed another woman, a colleague no less. The rat race turns people against one another – families included – and Bart, as he shows in the earlier of the movie, has proven he’ll do anything to keep up appearances and to secure his idea of the perfect image of the bourgeois class lifestyle. This means lying to his wife, at all costs.
Meg shows her own naivety about the capitalist world in which her husband works. Bart laments others in his office having Harvard educations and Meg replies: “So they‘re Ivy League. That doesn‘t guarantee everything in life.” Little does she know the only way her husband can pull himself up by his bootstraps is to alienate himself from his own being, the real world, and his family through work. Thus, Bart enters a struggle full of allegory against the beastly rat. When Meg gets home, the house is destroyed. At least Bart’s going to be fine at work, right? Who cares if he laid waste to the house and threw his wedding vows in the garbage, long as he makes the big bucks?

Cosmatos uses a ton of imagery to get his point across about capitalism’s detrimental effects and the rat race’s horror. Throughout the movie, Bart has a series of nightmares about his family returning home before he’s able to kill the rat. He sees his son’s birthday cake burst open revealing the rat gnashing its teeth— the epitome of family disruption, as his son’s birthday is ruined, and the image of a rat inside all the cake’s pristine icing is sickening. He has another nightmare where he and Meg make love when she returns, while downstairs their son makes a bowl of cereal with rat poison. These images are symbolic of Bart’s fears about what his struggle with the rat(/the rat race) will do to his family. He sees birthdays being ruined, a lack of concern for the safety of his boy, and other anxieties. These images embody Bart’s line: “There just ain‘t enough hours in the day.” Because while he’s busy with the rat race, fighting the other rats in the lab’s maze and focused solely on getting that cheese, life goes on— for better or worse.
Aside from nightmare visions there are several other important images Cosmatos includes to drive home his themes. A couple literary giants are referenced throughout to help connect things to a larger body of work about human existential struggles. In one scene, Bart uses a copy of Herman Melville’s novel Moby Dick to beat on the ceiling as he yells at the rat. We can see him as a version of Captain Ahab, hunting a rat instead of a whale. There’s another scene where the 1958 John Sturges movie The Old Man and the Sea is shown on TV, the screenplay adapted from Ernest Hemingway’s famous novel. Placing these two literary references within the context of Bart’s struggle is ingenious, and, though it’s on the nose, the allusions are warranted. Bart becomes Ahab and the Old Man at once, fighting nature, where one last compelling part of the film comes into play.
The rat race is part of the modern city and our modern anxieties. We see Bart and the rat as a struggle between man and nature in regards to the city itself. If we can’t protect our own homes from an infiltration of vermin, what chance is there against more serious threats? Bart’s violent encounter with the rat shows us how, when something as small as a rat can turn our lives upside down, modern existence is pathetically fragile. At an earlier time in history, rats were considered no more difficult to deal with than foul weather. Nowadays they’ve become a terror to us. Rats are representative of the abject, filth, and decay. They remind us of our environment’s fragility. Even in the postmodern city, we’re left dealing with our own waste and vermin. Not so advanced after all. Like one exterminator tells Bart: “This city is an open sewer, the rats are just waiting to take over.”

This is another case of a movie firing on all cylinders. Of Unknown Origin operates on its face as an odd, engrossing horror about one man facing the dangers of nature encroaching on his home. It’s also an impressive allegory for the detrimental effects of the capitalist working world on the individual in America. The movie ends with a comedic, happy tone, as if the struggle’s over. But the audience has seen Bart destroy the house and, in ways, destroy himself in order to get ahead in life, represented by his vicious fight with the rat. And even with his joking tone during the final line as the credits roll, Bart’s fate is left undetermined. We’re not sure if his life will be okay. Maybe he’ll work himself to death with a heart attack at the office. Maybe his wife will find out he kissed his colleague. No telling what might happen.
A creature feature horror’s fun enough. Father Gore loves seeing strange and horrifying monsters on screen. Like the greatest horror and art in general, Of Unknown Origin uses it premise as a way to illustrate real life issues plaguing us as modern people. Bart’s final fight with the rat culminates in him killing the vermin in a model house in his basement— a lasting image, suggesting the bourgeois home itself is a trap. Cosmatos brings all the gnarly rat stuff you might expect coming into this type of flick. He also gives us plenty to think about long after it’s over. For both these reasons, this is an ’80s classic more people ought to know and love.