Near an Outreach and Recovery Centre, zombies are feasting. They hear sounds in the distance drawing them away. They were busy having a lunch on Justin (Zach McGowan), who recently got sent packing by Rick Grimes (Andrew Lincoln). Soon he reanimates and heads off with the horde, too. There’s a message scrawled on a wall of the centre. Could it have been written by the Whisperers?
In some ways, life hasn’t change. Rick and Michonne (Danai Gurira) get to sleep in a real bed, in an actual house. She gets writing on the hopeful charter for the “foundations of a new civilisation,” while he gets and takes a walk. He sees the crops are starting to grow well again. All the while you know Carl is on his mind, wishing his boy could’ve lived to see what they’re building. Both Rick and Michonne have their own leadership roles, taking on aspects of the new society as their pet projects. She warns him things aren’t so peachy up at Hilltop with Maggie (Lauren Cohan) and Daryl (Norman Reedus), though Rick chooses optimism: “They‘ll get there, just like we did.”
On the road, Maggie runs into Jed (Rhys Coiro) and others from the bridge, looking for their former Savior buddy Justin, believing something suspicious might’ve occurred. They confront Maggie, and things are tense. At least Laura (Lindsley Register) is there to cool things off. But this is the beginning of something that won’t be good for anyone in the communities. Doesn’t help that moments later Maggie and her escort Kai (James C. Chen) see the zombified Justin stumbling from the forest.

Michonne, Rick, and Judith take a day off together, like a real family. They play and read and laugh together. That is, until there’s trouble Rick has to deal with— back to real life again. He and Michonne get word about Justin and the sentiment “someone definitely took him out.” Uh oh.
A brawl’s breaking out. Carol (Melissa McBride) rushes in. Might not be able to stop anything, though. Many blame Daryl, some blame Anne (Pollyanna McIntosh). Paranoia’s everywhere. Rick rides in on a horse like a bad motherfucker, momentarily calming everybody. However, the situation is nowhere near calm. Rick starts asking questions. He and Maggie put their heads together.
Gabriel (Seth Gilliam) lies to Rick, saying he was with Anne all night when he wasn’t, so the priest goes to her, hoping she might let him know where she was after they parted company for the evening. She acts suspicious.
The former sheriff saw the wound on Justin – “smaller and cleaner than a bullet hole” – making him think it could’ve been an arrow. This puts a wedge between old buddies, as Rick takes on the cop role he once knew and Daryl assumes the criminal role he used to play, pre-zombie apocalypse. Daryl has a continuing resentment for his friend’s actions re: Negan (Jeffrey Dean Morgan) and the Saviors. Everybody in this new world of zombies is stuck between a rock and a hard place when it comes to when you have to kill and when you don’t have to kill. This comes out clearest when the man who was once sheriff reminds the last remaining Dixon brother about mercy, bringing up what happened to Merle on that rooftop ages ago.

“But killing each other, when the world already belongs to the dead, it’s not the way. Not anymore.” 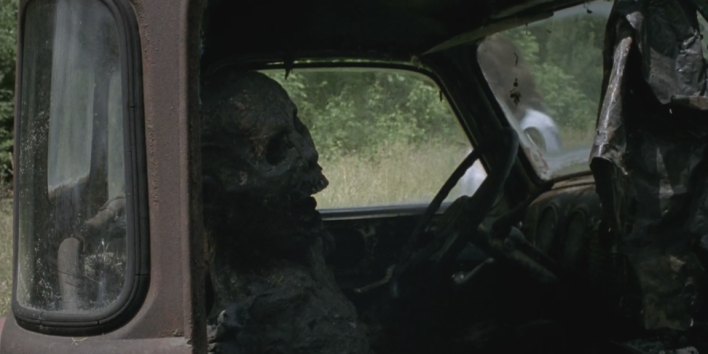 The communities sweep in grids through the surrounding areas. Maggie and Cyndie (Sydney Park) head for an old house. The house is infested, and it’s drawing more walkers every minute. Cyndie gets knocked over and Maggie rushes in to help, as zombies pour from one of the doors after breaking through. Daryl and Rick run in to help finish the place off, along with Rosita (Christian Serratos). Note: Could there be trouble with Cyndie’s open wound, after she had to grab a walker’s slippery, bloody neck to stop it from chomping her?
The group go to check on one of the other crews, discovering Bea (Briana Venskus) knocked out. She can’t remember what happened. Worse, one of the Saviors, Arat (Elizabeth Ludlow), is gone— taken. Not long later on the search, Daryl and Maggie find a zombie with a spear-like object in its torso. He says he knows who took Arat.
Back at the garbage dump, Anne finds a box, taking out a walkie. She turns it on and searches for a frequency. She’s calling whoever it is with the helicopter. The voice responds: “What do you have— an A or a B?” Seems she has a deal with them. The voice says they need “an A” tomorrow in order for her to get a ride out of there. Who’s flying that helicopter? Is it military? A private contractor? Anne’s interrupted by Gabriel, who followed her, wondering why she’s keeping a secret from him. She says she “traded people,” and planned on doing it with him and Rick. The deal was for supplies. She says there’s “another place,” far from there, asking the priest to go with her. That is, if he helps her get what they need. He refuses and says he’s going to tell Rick. This forces her to knock him out. What exactly constitutes an A and a B? So curious.
In the woods, Carol gets nabbed by Jed and one of the Saviors, who want guns so they can go on the road by themselves. Rick confronts them, trying to talk the guy down before anything nasty happens. Carol’s not going out like this— she hauls out her knife and Rick takes her cue, as they subdue the men.

At the Outreach Centre, Maggie and Daryl find Arat at gunpoint. It’s Cyndie and the Oceanside women. They killed Justin, too, for revenge. Maggie tries convincing them not to do what they’re doing. Seeing Oceanside paralleled with our survivors, both of whom have lost so many people at the hands of the Saviors, is a compelling, painful moment. The Oceanside women took a cue from Maggie hanging Gregory: “Rick‘s rules aren‘t the only rules.” A turning point has arrived, as Maggie and Daryl see the rationale in what the Oceanside women are doing, unwilling to save Arat. This is where Rick and his friends fully diverge on their paths. Not saying some Saviors don’t deserve it. But when does the killing end? Nobody knows.
And now, Maggie tells Daryl: “It‘s time to see Negan.”
Fantastic episode, taking The Walking Dead into new territory. We’re about to see a huge change. It may be what the series needs. Although I love Rick, and I love Maggie, with them supposedly leaving the show for good, the show has to find a way to move on into different themes, different characters, so it’ll be great to watch how Season 9 continues playing out.
“The Obliged” is next.