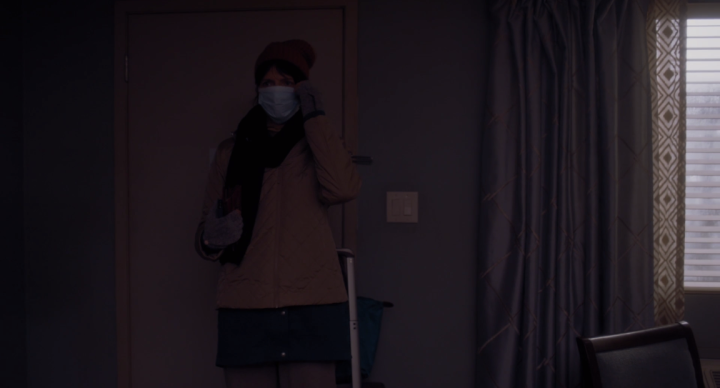 At the motel, Catherine (Dolly Wells) checks into Room 104. She’s wearing a surgical-style flu mask. Inside, she takes off her mask and gets comfortable, unpacking a few things. She sits on each bed to figure out which one she likes best.
Suddenly a voice comes out of nowhere, like maybe it’s coming from the next room. Possibly “the walls are just really thin,” Catherine assumes. She thinks the voice is from a telephone conversation next door, and slowly gets incredibly annoyed. She calls the front desk to complain only to discover there’s nobody in the next room— it’s vacant. This sort of pisses Catherine off, so she has the clerk come check on the room, verifying there’s indeed nobody there.
The voice talks again and Catherine wants to know what the hell’s going on. The woman tells her: “I‘m inside the wall.” Weirder still the woman knows Catherine’s name, as well as many things about her life, like the “strange ailments” she’s been experiencing over the last year. Catherine believes she’s going crazy because of a mix of prescription drugs. She’s suffering one hell of an existential crisis.
She tells the voice to shut up. And it does. The voice returns soon enough, singing to Catherine. She asks if there’s anything they could talk about, which prompts Catherine to start describing a gradual descent into anxiety. She tells the woman in the wall about her psychological predicament leading up to the “aches and pains” she’s experienced. The voice asks about significant others and friends, wondering why nobody’s there with Catherine. For her part, Catherine genuinely feels she doesn’t “work right.” Perhaps the feeling is existential agony and not actually anything physical or even deeply psychological.
Then the voice suggests they masturbate together. She talks Catherine through it, hoping to release all the emotional blockage inside. Catherine tries harder and harder to let go and enjoy herself, her body. After a moment, she gets there and reaches an intense orgasm, finally letting go.
Some time later Catherine gets back to Room 104 again. This time she’s in a wheelchair from “crippling Lyme disease.” She’s far angrier than last time. She rages at the woman in the wall. The woman claims she’s Catherine’s “only real friend,” but the latter says she stopped going to doctors after her time there in the room, leading to the disease taking over. The voice sings to her again, trying to comfort her. 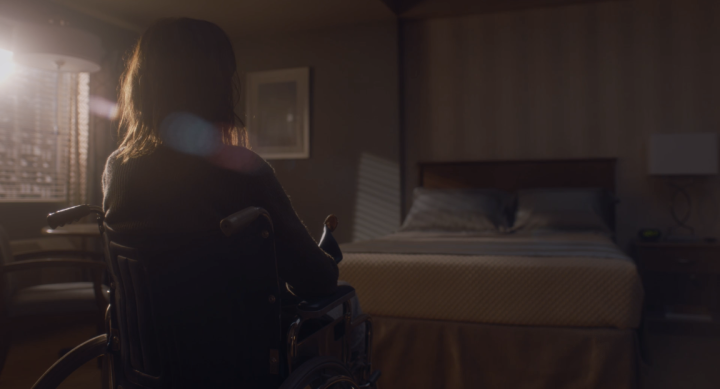 More time passes and Catherine’s back at Room 104 for yet another trip. She’s no longer in a wheelchair. She’s happier to be returning, greeting the voice with a smile and glad to hear the voice talk back. Their reunion’s a nicer one now that Catherine is without pain and married to a good man. She came back to apologise to the woman in the wall. All the same, she remains sad for some reason. The voice admits: “I‘m sad, too.” She worries about not seeing Catherine anymore. She doesn’t want to be there by herself.
The voice reveals she’s an actual woman. Something bad happened to her there. She wants somebody to believe she’s real. Catherine touches her body to the wall, singing the same song the voice did for her previously. But then she starts to get sucked into the wall, becoming part of the room itself. The wallpaper consumes Catherine until she disappears completely.
Will she now be the woman in the wall? 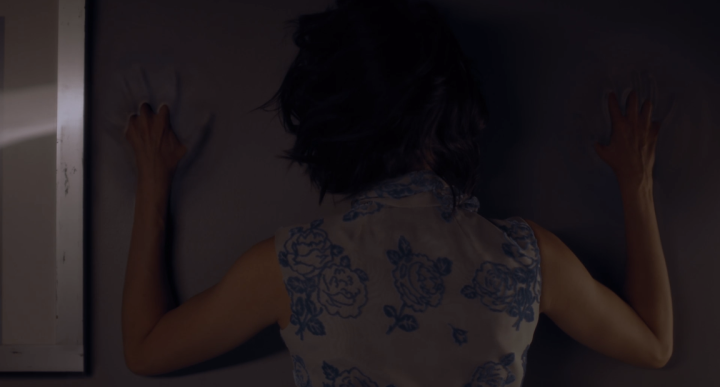 Sometimes it’s tough to pin down what Room 104‘s stories mean, yet there’s something simultaneously refreshing about a TV series, particularly an anthology, that defies meaning. “Woman in the Wall” is, at times, the story of hidden women, forgotten women, concealed women— almost like a 21st-century version of “The Yellow Wallpaper” by Charlotte Perkins Gilman. There are also great moments where it feels like the self v. the self, as Catherine tries to justify her emotions and headspace by way of a disembodied voice, like she doesn’t trust herself totally so her inner voice becomes a separate entity, ultimately consuming her. Regardless of how you interpret it, “Woman in the Wall” is a fantastic chapter in Season 2 that will keep your brain running long after it’s over.