In the aftermath at the hotel, Glen is dead. This leaves Ryn (Eline Powell) and Maddie Bishop (Fola Evans-Akingbola) to play up a story for the latter’s mother Susan (Garcelle Beauvais), telling her they found him that way. Mom suggests to call hubby Sheriff Dale Bishop (Gil Birmingham). When he turns up, he surveys the chaotic scene and knows it’ll be difficult for them all going forward, even if he doesn’t fully know what happened in that room.
At his place, Ben Pownall (Alex Roe) discovers Levi (Sedale Threatt Jr) gone. All that’s left behind is a mess. On his boat, Xander McClure (Ian Verdun) continues to fall into the trap of Nicole Martinez (Natalee Linez), as she gathers intel on him, Ben, and Calvin (Curtis Lum), but he’s got other things to worry about— Katrina (Aylya Marzolf) and Cami (Millan Tesfazgi) have commandeered his ship, locking him up right next to ole Levi. Wonderfully strange turn of events!
Across town, Helen (Rena Owen) deals with Viv (Alvina August) and Eliza (Georgia Waters), aggressive in their own rights. She hears something outside and, worrying it’s a threat, she sends the mermaids to hide. She sees Sarge (Hugo Ateo) peeking through the window. He clearly has a thing for Ms. Helen: “You here. Me here.” A fun, brief buddy road trip scenario develops between Sheriff Bishop and Ryn. He thanks her for saving his daughter. At the same time, he has to explain to her killing’s wrong. He attempts to tell her of the law. He also has to admit to himself the grey areas of that same law he works to uphold. He tells Ryn there are “laws on land that cannot be broken.” Her simple question in reply speaks volumes (“Always?”), added to his silence afterwards. Not so Kantian, is it, Dale? He tells the mermaid of stories the Haida people tell of “shapeshifters” and their power— a power used for either good or bad. Interesting enough to watch Ryn deal with physical and emotional changes on land, seeing her grapple with morality is incredibly compelling.
Xander’s stuck down below deck with Levi, who tries apologising for killing his dad. He can’t reconcile with Levi blaming it on being ordered around by Katrina. Perhaps there’s understanding for Xan if he comes to see how he’s been manipulated by Nicole. He manages to get Ben on the phone. Ben heads to the dock and gets Xan and Levi off the boat, just as Nicole turns up to witness the entire scene. Back at the research centre, Ben stitches Levi up while he and Xan confront what’s gone on, and Calvin arrives in the midst of their conversation finally seeing the truth about the mermaids clearly.
Sheriff Bishop’s left to clean up the hotel, making it look as if Glen got too high, fell over, and broke his neck on the bathtub. Someone shows up at the door: an associate of the dead drug dealer. Luckily the guy leaves and slips a note under the door about their upcoming deal. Dale then finds drugs in the room taped behind the dresser. “All with Ryn will die”

Ben’s decided to go to Ian Sutton (Luc Roderique) about his father Ted (David Cubitt) being “in bed” with Big Oil. The reporter says those big wheels are turning against truth in journalism, shutting his story down. This angers Ben. He goes to see his father, confirming all he’s suspected. There’s a deal between the oil company and Pownall Seafoods to lease “a strip of land for a pipeline” bringing further destruction to the natural ecosystem of Bristol Cove. Quite a timely discussion, seeing environmentalist Ben against his capitalist family, all of whom hide behind the age old excuse of needing to revitalise the local economy, when it’s actually about greed. Ben walks away from the confrontation believing he and Maddie have to do anything possible to “make some noise” and disrupt the oil company’s plans.
On the boat, Sarge goes to Katrina saying that he feels Ryn is weak. He wants to take her to his current leader. Is it for real? Or a setup that’s been orchestrated? Looks like the latter, as all the rest reveal themselves, including Ben, Maddie, Xander, Calvin, and Helen. They’ve brought Katrina to “hallowed ground” in the cemetery. Ryn tries to make peace between merpeople and humans, seeking a truce. Ben tells Katrina the humans want to help fight for the ocean. Seems Katrina reaches an understanding with Ryn.
There’s a dead body dragged up from the ocean. Is it Xander’s father? Regardless of who it is, it’ll cause trouble, like Sheriff Bishop needed more dead bodies on his doorstep. 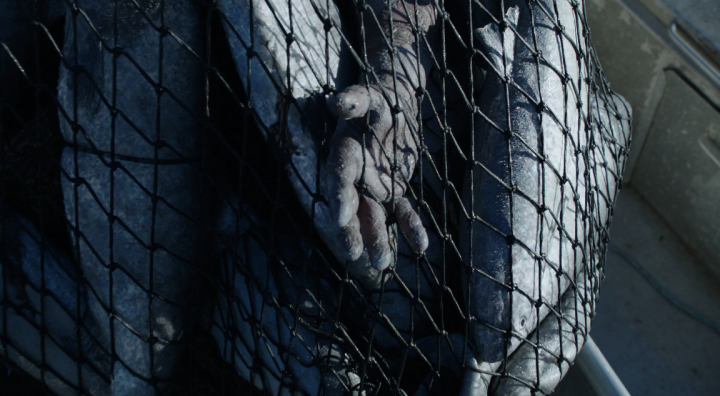 Another solid Season 2 episode for Siren! Lots of great character work coming out. Nice to see Gil Birmingham more in this chapter, too. He’s a fantastic actor, whose arc here is quite good, if not tragic. “Entrapment” is next time. By the sounds of the title, there’ll be wild things happening— as usual.