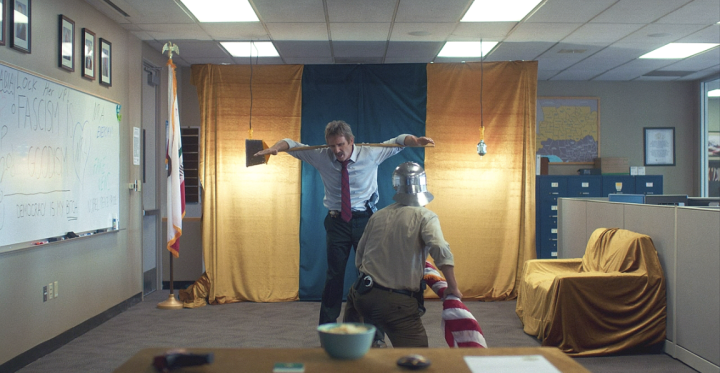 In the Tarot, The Hanged Man represents an unorthodox, upside-down view of life, signalling change in perspective. If upright, the card suggests old ways of thinking need to be put aside, subconscious wisdom is at work— in a more literal sense, it can mean hanging around, awaiting the outcome of a major decision. If reversed, the card signifies a limbo of conflict, and that one is bound to the earth, fettered by materialism.

Refn’s love of Kubrick shows, once more, in his use of “Sarabande” by Handel. Detective Martin Jones (Miles Teller) sits in front of a makeshift stage with two microphones hanging from the ceiling. Ole Lieutenant (Hart Bochner) is putting on a passion play. Notice the whiteboard, too: “Lock her up,” “Fascism” and “Goodism,” as well as “Democracy Is My Bitch.”
Next comes (part of) the Five Holy Wounds, as the nails are put in. One detective uses an American flag as the Holy Lance while giving him a good stab “from the NRA, bitch” and screaming “Fake News.” A marvellously absurdist scene. Captures how many use religion as a shield / a weapon. They pretend to have respect for Jesus and religious sanctity, using it to oppress and ostracise. Then they turn around and make a violent, ridiculous spectacle of it, whether it’s maniac Mel Gibson doing a Jesus torture porn flick or Christians around the globe on Easter putting on disturbingly elaborate shows in the streets. Or, the Lieutenant here performing for his detectives.

Again, it’s the inseparable Church / State link in America. A great use of theme. Martin’s leaving behind his job as a detective. He’s choosing a more esoteric, spiritual path towards delivering justice, rather than that of the police world, bound by law, as well as righteous and misguided morality, which is itself bound up in Judeo-Christian values. 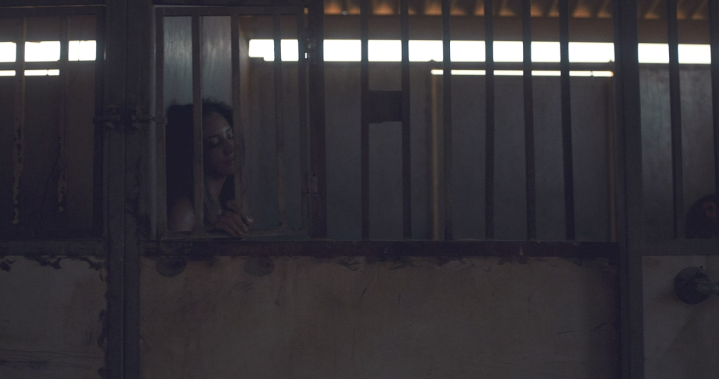 On a farm, Jesus (Augusto Aguilera) and Yaritza (Cristian Rodlo) are shown where the horses are kept in their stables, and where women are kept, locked in cages. The High Priestess of Death walks through the stables, seeing these women kept in a place meant for animals. We know she’s been freeing women already in Mexico. Will the Priestess do the same in America? And how will that sit with Jesus?

Janey (Nell Tiger Free) can’t seem to find her father. She’s telling a detective about when she last saw him five days prior, during her birthday party. After talking a while, she mentions that Martin might’ve been the last one to see him. The timing of Theo going missing and Dt. Jones hanging up the badge might look suspicious to a prying eye, not to mention Janey’s age.
Things are unravelling— fast. The words “statutory rape” are finally uttered.

A scene with Martin and Diana (Jena Malone) parallels the one in Volume 3 with her and Viggo. The pair walk near the water at different paces, moving in and out of frame. She walks ahead, then Martin disappears behind her. She goes back to meet him again, telling him of someone named Redford (Callan Mulvey).
Viggo picks up Martin. The Alex Jones-like radio personality warns of being “invaded by a hostile force” and insane alien conspiracy theories, like “colonisation of the mind” and other paranoid madness. They head to an abandoned mall. The older assassin’s health is clearly getting worse, barely able to walk five feet without coughing— gives Walter White in Season 1 of Breaking Bad a run for his money.

This leaves Martin on his own. He finds a tent. He also finds himself at the end of Redford’s shotgun. Not long until the assassin kills, then goes back to his sick mentor. He gets Viggo back home. The mentor asks his protege to hold him. Martin puts an arm around him and they sit intimately until the former’s body stops shaking with violent throes of pain. 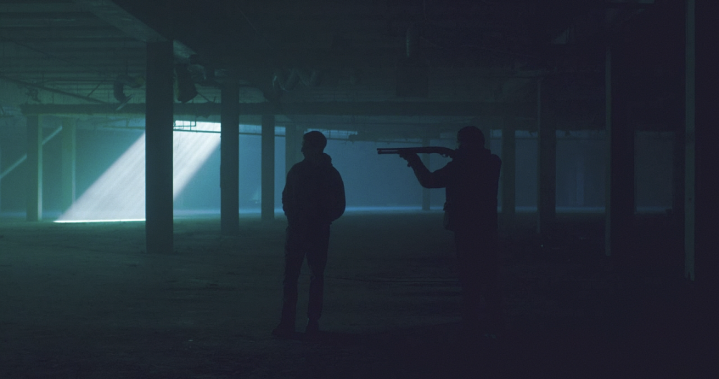 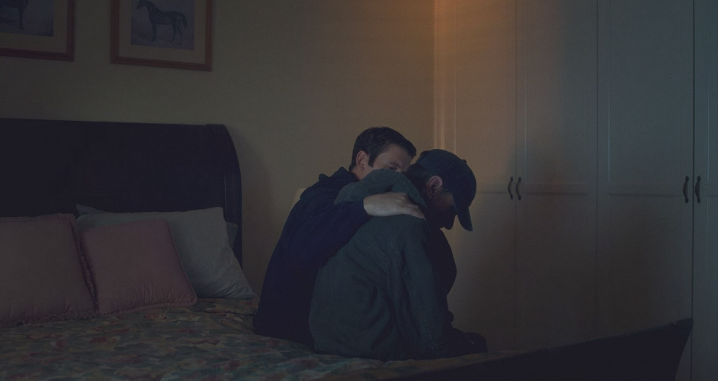 Martin’s on the beach with his young girlfriend. In the distance, a couple men sent by Jesus are watching. They get a call and they rush Martin, knocking him out. They execute Janey with a bullet through the eye. Martin’s taken to the stables, where men beat him mercilessly and leave him alone with the boss.
Jesus uses a bullwhip on Martin, lashing his back into a mess of bloody flesh. Interesting having a character named Jesus be the one to whip another man, in a reversal of the earlier scene depicting Christ’s torture, giving us a kind of subverted Flagellation of Christ. If we want to get real deep, in an earlier episode the radio guy mentioned the “American Empire” paralleling the U.S. and the Roman Empire. We can view this as a figurative scene depicting Jesus returning to punish the Romans (i.e. Martin, a former cop, servant of the state).

Soundtrack note: Another strange, awesome dancing moment comes from Refn using “F.F.A.” by The Leather Nun while one of the cartel henchmen grooves. Fitting song yet again with Martin’s colleague earlier calling him part of the “Fist Fuckers Association.”

The next day, Jesus starts with the whip all over again. He lashes away at Martin, who barely reacts to the pain anymore. Either the assassin has gone into a state of shock, or he’s reached a higher stoicism. Jesus, frustrated, goes to his room. He’s jerked off by Yaritza while she spits in his mouth. She finishes him off and smears the cum over his chest, forcing her hand into his throat and wiping the rest off on his mouth. Seriously kinky shit.
Again, the links between violence and sex— Jesus, after whipping another man brutally, is only relieved of the violent urge by orgasm. Sex, like so much of life, is violent. And the whipping continues. 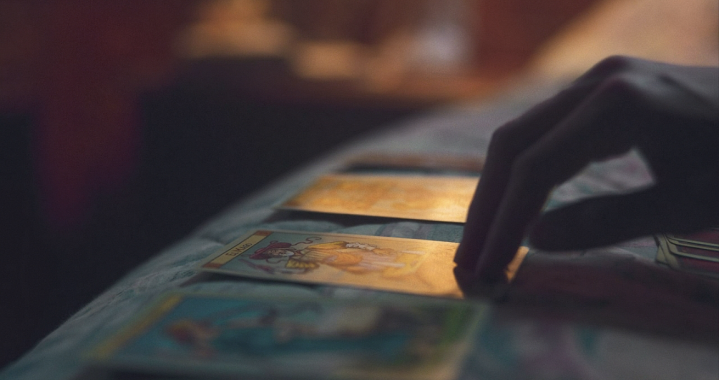 How long will Yaritza listen to the women suffer? She can barely contain the rage behind her eyes as Alfonso and the other men go to the stables, abusing the girls, using them as as toys. She sees them shipped off by truck like livestock, sent to another destination filled with pain and torture. So, she’s headed after them.
She gets to a motel, leaving a trail of gruesome murder. She finds one man in a room with a Nazi flag hanging above the bed and shoots him in the dick. She frees a girl, telling her to let everyone know it was the “High Priestess of Death” who saved them.

Sex and violence come together again later.
Jesus lies naked in bed. Yaritza caresses the whip, wrapping it around his neck and choking him with it— similar to how Martin choked Theo— before spitting on his asshole and penetrating him with her hand and then the whip’s handle. A moment of ritual-like sex with a weapon of violence is intense and, in context, absolutely terrifying.
What’s interesting is to see Yaritza as the dominant and Jesus as the submissive. Her strength is so visible, in various ways. Makes Father Gore wonder how long she’s going to put up with the misogyny of the cartel in secret, and when it may become a divisive force between the married couple.

Jesus returns to the stables, where Martin bleeds from festering wounds.
He runs a machete over his captive’s scarred flesh. He takes a moment, then chops Martin into bits with the blade while Yaritza watches. There’ll be nothing left. 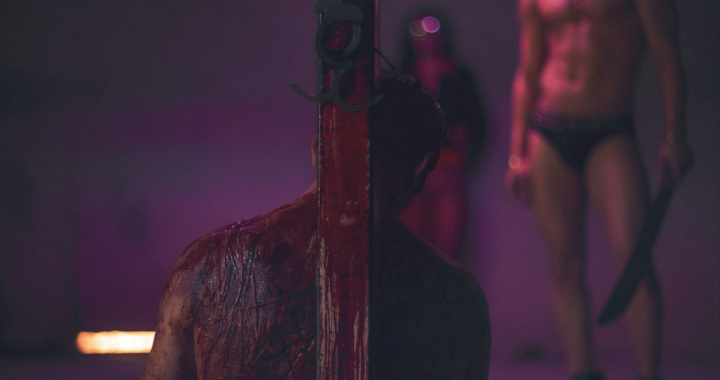 Holy shit! Refn and Brubaker pull a bold move in storytelling here. Never expected Martin was actually going to die. A huge development with only two episodes left. It’ll be compelling to watch everything play out. No surprise that Martin won’t be the ultimate hero, because his morality, even for a hitman, was troublesome.

Will Viggo take revenge for what’s happened to his protege? We’ll see.