In the Tarot, The Empress represents productivity, fertility, and maternal care— a protector of nature and the Earth. If upright, it signals domestic comfort, security, and protection. If reversed, it signifies emotional extremes, where maternal nurturing turns to emotional blackmail, over-protectiveness, and insecurity.

Diana (Jena Malone) lies on the floor dreaming. At the centre of her dream is the shape of a person. She has visions of a fire, and a chrome woman, like the one we saw during the bloody machete hacking of Martin (Miles Teller) at the end of Volume 8. This startles her awake. Afterwards, she sees herself in the mirror with chrome-like eyes radiating a rainbow out of them.

Notice the store with a United We Stand American flag poster on the window, surrounded by religious iconography. Again, the Church + State of America rears its head— the spiritual sickness in America that is Christianity mixed with fierce, unsettling nationalism. The melting pot of America means there are other forces at work, though, and they have as much influence.
Diana’s at the shop to see Uror (Bb Gandanghari) about the chrome eyes she woke up with after her visions— she saw “eruptions of violence” and “death” like usual, but in this dream she also saw a woman. Is the chrome woman she saw, and who we saw during Martin’s murder, one of “the Beings” she mentions? And is Yaritza (Cristine Rodlo) the barely seen woman of Diana’s visions?
Diana has jewelled eyes placed over her own. There’s voodoo about, as we see a veve in the background while the ritual’s conducted. She sees a naked woman in the desert: “Death follows behind her“— absolutely Yaritza. She knows this woman is headed towards her. Once the ritual is complete, Diana’s eyes return to normal. She even gets a cold can of soda, too.

Yaritza and Jesus (Augusto Aguilera) are role playing. He pretends to come home from school. She’s there in her red dress with a stack of cash for her boy. The whole reincarnation idea makes the role play more creepy than it is already. Jesus directs Yaritza to say certain things. Like he needs it. He asks mommy if he looks like her, so she does his makeup, to show him just how much they look alike. Then, they fuck in a room full of pictures of Magdalena, so Jesus can have the best of both worlds. 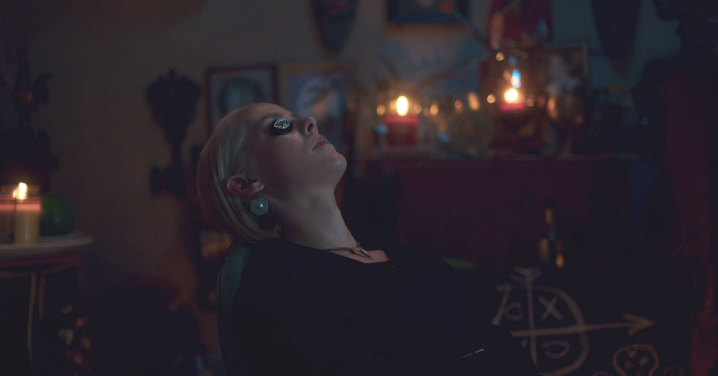 Great Twin Peaks-esque moment in a bar where Jimmy Angel plays for the cartel boys. Alfonso (Manuel Uriza) and Jaime (Gino Vento) pay tribute to their fallen friends in the latest “territorial dispute,” the term that’s so casually thrown around by gangsters of every kind. They’ve also got business to settle. The cartel are having a “moratorium on torture,” so it’s only disappearances right now. Another hilarious, absurdist moment from Refn and Brubaker. We see these brutal killers talking about things like it’s a regular staff meeting. One even suggests “Cartel TV” to expand their brand. They’ve got thousands of new followers from the latest murder. Best of all, the cartel lament the cultural appropriation of white hipsters selling Mexican food from taco trucks and discuss how to “control our own content.” Great scene.

Word’s come down about the High Priestess of Death. Alfonso passes it off as “peasant fairy tales,” whereas Jaime knows regular people are scared, and it’s costing money. Yaritza sits there hearing it all, knowing the truth. A woman claims her mother met the High Priestess, during the days when he “rode with Pancho Villa in the war.” They say “the apocalypse follows” her. Jesus wants “more violence, more rape,” no moratoriums. He wants to displace America as the “centre of the universe.”
Things are going to get ugly— well, uglier.

Viggo (John Hawkes) reflects on the contradictions of religion. He thinks about what it means to be of this Earth and also of God. He knows we can’t deny the most primitive parts of ourselves, especially not if we believe God made us as we are. Then it means God meant for us to indulge in those baser instincts.
He takes out his fake eye, then his mother eats it.
Not long later, he finds his mother in bed dead, his eye in her palm. He’s put in parallel with Jesus. Both men want to kill. They want to bring blood and death. Each of them have lost their mother, albeit in vastly different ways. They’re opposites, as well. Jesus orders rape and murder while Viggo, and Diana, seek to murder the rapists.

A fascinating scene shows Viggo going to a desert town where a bunch of greasy deviants live. He comes down upon them like an atom bomb. Trailers explode. People are shot. Mannequins— like those from the 1950s used for nuclear testing in fake towns out in the desert— burst like they’re rigged with explosives.
There’s something in here with the cowboy image, Santa Claus, as well as the Holy Bible flying through the air and a Nazi flag flapping through money. Not to mention there’s Wagner playing. Feels like an allusion to the atomic bomb as a symbol for the beginning of a postmodern America, for better or, likely, for worse— the atomic bomb-like explosions happen to be destroying what’s either an image of the Wild West or a literal film set of the Wild West. Also, this sequence calls to mind the finale of Zabriskie Point— Antonioni’s film was a fairly scathing perspective on America.
(Keep an eye out for a comprehensive article soon enough about the series as a whole, where Father Gore will try to unpack all the symbolism.)

Diana meets a waitress, whom she tells about the original Little Red Riding Hood. The actual Red was a heroic girl “who guts the wolf” after it rapes her. Diana’s point concerns the perversion of women’s stories, where women are the damsels in distress and men are either beasts or saviours with no grey area between the two. Patriarchal society makes these stories into what they need, whatever serves them best, often to subjugate women. The Little Red Riding Hood that Diana speaks of is a woman who doesn’t need a male fantasy Woodsman to save her— she’s her own Woodsman. 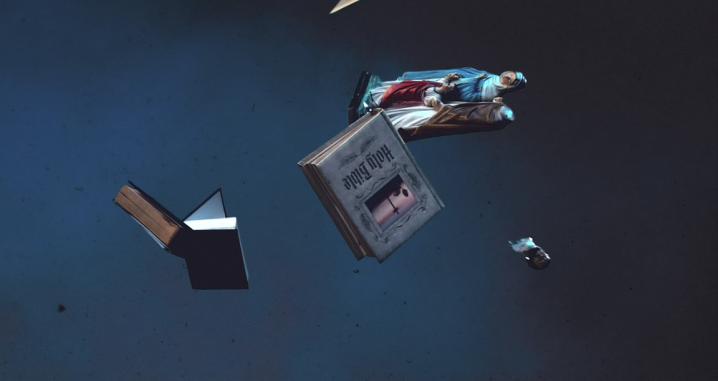 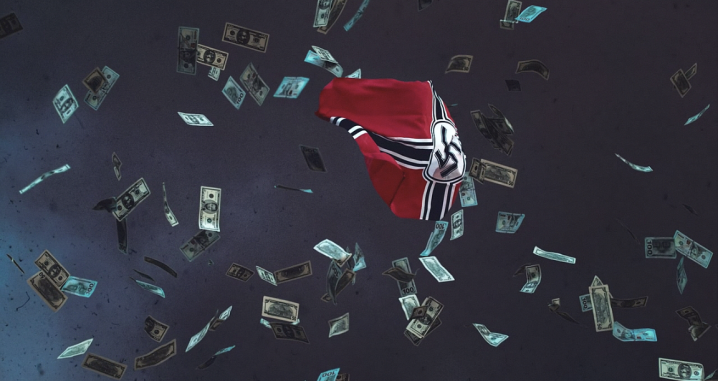 A weird episode that’s so perfectly fitting for the series. The David Lynch influence might never be clearer than here. Nice to see Halley Gross co-writing here with Refn and Brubaker, adding a decidedly feminine touch to some of the already running themes. This penultimate chapter sets up what ought to be a compelling finale. Many strange things are about to collide.