In the Tarot, The World features an androgynous figure encircled by a green wreath, which is a sign of completeness, but also within it there are the seeds of the new— number XXI, it is a symbol of creation, as the World gives birth to the child, or The Fool, and so the cycle of the Tarot begins again.
If upright, it means a successful outcome, a life landmark, and a chapter is coming to a close. If reversed, it signifies stagnation and an inability to move forward, manifesting as a refusal to let go of the past and a suffocating, unfulfilling cycle.

Diana (Jena Malone) is in bed masturbating with a virtual reality headset, listening to the commands while playing with her clitoris, her labia, her anus. She rubs away while a woman’s voice counts down several times. She gets more intense until, finally, she orgasms hard and stretches out satisfied onto the bed. She shaves her legs in the shower, then sits by the pool, calling in sick to work. She watches a video about a “pill–shaped object” in the sky with alien beings aboard preaching “peace.” Notice there’s a Buddha head statuette in her home, paralleling an earlier episode where Martin (Miles Teller) sat across from a bust of Aristotle.

A timely speech from Diana involves how “hate will be rewarded” in the new America. Perhaps the most relevant piece is when she says “concentration camps will be rebuilt“— right as the country’s caught in a conversation over what to call Trump’s detention centres, arguing more passionately over the language being used than they’re rallying to get people out of them. She warns narcissism, violence, rape, and all of the perversity of humankind will be the new order of things. Through it all, she gives a prophecy that a “Dawn of Innocence” will follow the chaos.
Father Gore can’t help relate much of this speech to the current state of America. “Incest, molestation, and paedophilia will all be praised” isn’t far off in a country that elected a man who’s blatantly displayed lust for his daughter, where a scummy fuck like Roy Moore can manage to not only nearly be elected but is, again, trying to potentially run for the Senate. Best of all the quotes from Diana’s thoughts has to do directly with the ole US of A: “For not all men are created equal“— a direct refutation of the very roots of America, slightly changing the United States Declaration of Independence to a more realistic quote about the country’s deep-seated racism. 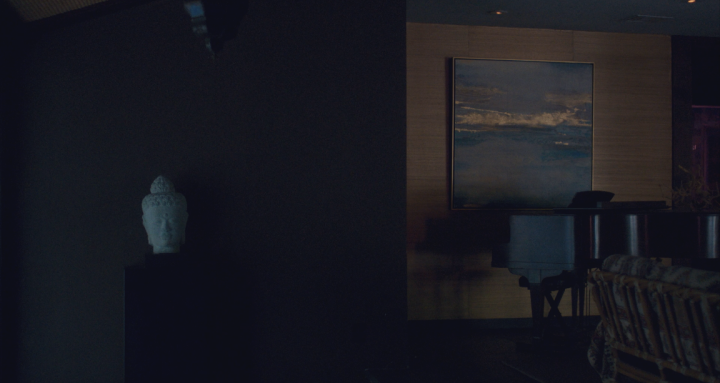 “Our identities will be defined
by the pain we cause.”

The High Priestess of Death, Yaritza (Cristina Rodlo), goes to a bar where the Mexicans drink. She does a shot of tequila with Jaime (Gino Vento). She asks a favour of a woman there, wondering if she knows the song— a narcocorrido— written about the High Priestess and wanting to hear it sung.
The woman sings as Yaritza watches the men. An interesting line, tying into larger themes throughout Too Old to Die Young: “An endless cycle is their prison.” When the song is finished, Yaritza reveals herself to the cartel men— the “seed of destruction” come to rid this universe of evil— pulling out her gun to kill them all.
After that, she’s moving on elsewhere to finish what she started.

A perfect soundtrack ending with “Rocka Rolla” by Judas Priest over the credits.
ALL HAIL THE HIGH PRIESTESS OF DEATH!!! “For hate will be rewarded
& seen as truthful
& beautiful.”

Please, for the love of all that’s holy in the universe— give us another season, Refn! This finale was short but spectacular. There’s a whole other world of themes and plots waiting to unfold in this little universe Refn’s created, along with the help of Brubaker, as well as Gross in the final two volumes. It’d be SO FUCKING FUN to see Diana and Yaritza come together in a whole other set of episodes. There’s a huge amount of symbolism and mythology within these ten already.

Even if there’s not a Season 2, Too Old to Die Young has been a miraculous journey, and a huge step into a new realm of episodic film making. Let’s cross our fingers there’ll be more to come.

[UPDATE]: There’s no Season 2, sadly, though unsurprisingly. At least we have this strange fever dream to revisit whenever we want, to get lost in for 10 hours at a time.