Maddie (Fola Evans-Akingbola) is going through an interview with Nicole (Natalee Linez) and another military official. Ryn (Eline Powell) and Ben (Alex Roe) watch on in another room. Poor Maddie can barely concentrate on the questions— intensely personal questions about “substance abuse” in the home and more. She gets mad. She’s reacting differently than Ben to the siren song. Still another version of “out of control.”
This sends Ryn into the ocean to bring back a “healer.” The other mermaid isn’t able to help because the song’s too strong in Ben’s head. The mermaids mention a “secret place where sound is kept.” May be an answer. They have to get down there somehow, deeper than humans are able to go. Nicole and the couple go to Commander Kyle (Michael Rogers). He’s able to give them access to the necessary equipment.

Helen (Rena Owen) is seeking info about 1962. She discovers the fire at the cottage on what’s now the Pownall property was investigated as a potential arson / homicide. A dark secret lies there. She goes directly to Ted (David Cubitt), asking if he knows anything. Ted denies having any knowledge.
Is he telling the truth? 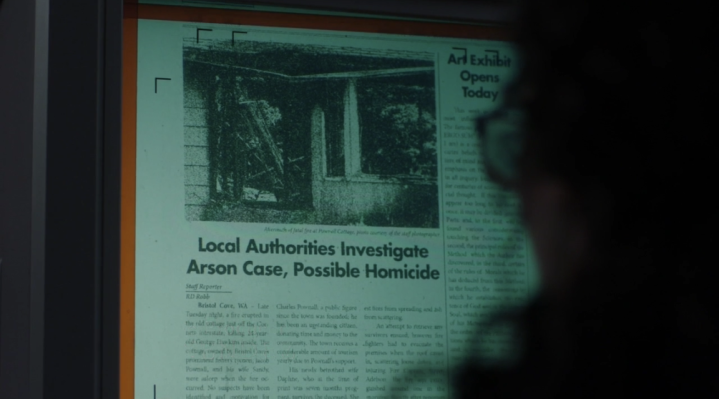 Rick (Brendan Fletcher) gets a visit from Beth (Caroline Cave). His sister has concerns about Helen, believing she can’t be trusted. This is where he lets slip about the other mermaids. Shit. Not a good idea. Cat’s out of the bag now.
Father Gore doesn’t trust Beth. She’s shady.
The thrupple are heading aboard a sub. They’ve got no idea Levi (Sedale Threatt Jr.) is back at the bar. He’s dancing to the jukebox and refusing to listen to Xander (Ian Verdun) or Calvin (Curtis Lum). The guys treat him like a real asshole, too. Doesn’t help anything. Until some guys come after Calvin for gambling money. The mermaid makes quick work of them. Levi likes being on land, among people. He wants to be there, rather than only in the ocean. This leaves the lads wondering where to take him while he’s out of the water. Helen’s is usually the best bet.

Speaking of, Helen goes to see John and finds out he was set to be married to her mother. Except mom was in love with a human man— “a betrayal” of the mythical bloodline. John believes the group capable of anything, even murder, in the name of protecting their secret. At the shop later, Helen gets a surprise when Beth shows up, concerned about mermaid privacy. She asks the woman frankly about the group’s involvement in her parents’ death. Beth refers to the “inter–marriage” of a mermaid and a human, only serving to show us more behind the mask.
Perfect timing for her to leave, seeing Levi on his way to the shop.

Below the ocean, the sub’s deep and communications are lost. Ben’s able to regain control after things go haywire. The thrupple look at the ocean landscape far beneath sea level. They come to a “breeding ground” where the mermaids mate— where Ryn and all the others were made / born. A mermaid greets the sub. Ryn looks back at her family with human eyes. Then a bunch of mermaids start to rough the sub up. They decide to keep moving towards the song’s place.
When they arrive it’s like the song is “everywhere” all at once in that ancient place.

Ben’s brain damage is being reversed already, after only one trip. Great news. Especially if it means his mother can get further treatments and not be exposed to worse side effects. Elaine (Sarah-Jane Remond) is getting better each day. She’s excited, feeling healthy. Ted tells her about letters he found sent between his grandmother and Helen’s mother. This is how Helen’s parents came to live at the cottage. Puzzle pieces are falling into place. Although they have further to fall.
Oh, and Nicole, she might seem like she’s on the good side now.
But she’s sly, keeping an eye on the thrupple with hidden cameras. Big Brother shit.

Another good episode. Love how the backstory of the families is getting filled in, as was expected eventually. The mystery’s been so great that it’s nice for it to pay off. Also, there’s a ton of mythology / folklore here, there can easily be a Season 3, which many fans clearly hope for after this one’s over. Many paths the series can take going forward. Fun to see lots of new things opening up even as the old mysteries are unfolding fully.

“The Outpost” is next time.