Deanna (Tovah Feldshuh) and Reg (Steve Coulter) sit listening to their dead son’s mixed CD. “Somewhat Damaged” by Nine Inch Nails fits perfectly with the mood. Because everything’s fucked up. Carol (Melissa McBride) is making a grief casserole. In the watch tower, Sasha (Sonequa Martin-Green) finds solace in sniping zombies, trying not to let the creeping dark thoughts fill her head.
We see Nicholas (Michael Traynor) on tape blaming Glenn (Steven Yeun) for distracting Aiden, leading to his death. Pitiful. Glenn tells the truth. Now there are two sides to a story, pitting him against Nicholas. Rick (Andrew Lincoln) knows Glenn would never have done what he’s accused of doing. He also doesn’t think Alexandria is cut out for this existence. “We are them,” Glenn insists.

On their run, Aaron (Ross Marquand) and Daryl (Norman Reedus) notice a light off in the distance, somewhere in the dark. Who else is out there?

Carol and Rick are considering what to do about Pete (Corey Brill). They want to stop him, considering the violence he inflicts on Jessie (Alexandra Breckenridge), as well as the terror through which puts Sam (Major Dodson). Rick and Pete stumble onto each other in the night on the street, the constable making clear with few words that he doesn’t like the man. Although Pete’s a piece of shit, killing him would be extreme, and it’d absolutely cause issues with the community.

At the site of her son’s grave, Deanna talks with Rick. He mentions their “problem with Pete,” and she admits to knowing about the abuse, expecting it to get better. She was going along to get along, due to Pete being a surgeon. Rick doesn’t care. He wants to separate the married couple. That is, until the guy refuses. Then they’ll have to kill him, says the constable. Deanna won’t execute people. She’d exile Pete instead.

In the woods, Carl (Chandler Riggs) follows Enid (Katelyn Nacon). She knows it, too. She’s a great survivor. He’s curious why she’s out there by herself. Enid leads him on a little chase, running into the trees rather than answer his questions. They have things in common. Neither of them wants to forget how to survive in the wilderness. A walker passing them by has another W carved in its forehead.
Back at Alexandria, Glenn confronts Nicholas, telling him: “People like you are supposed to be dead.” He makes clear the guy doesn’t go outside the walls ever again. Or there’ll be trouble. Oh, and looks like Nicholas is the one who stole Rick’s secret stash gun from the woods before. 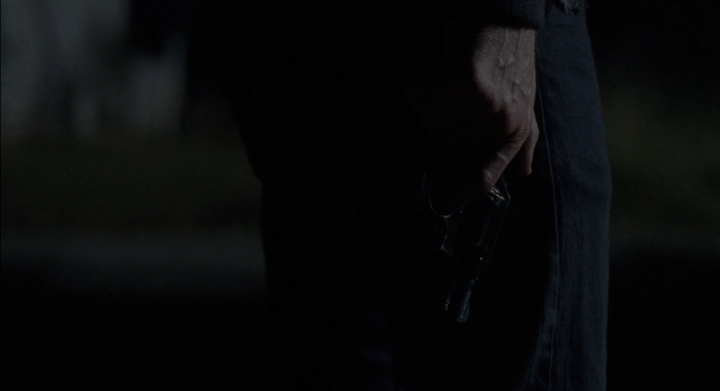 “Warning someone to stop or die—
that is civilised nowadays.”

Out in the trees, Daryl and Aaron find dismembered body parts lying all over the place. It’s fresh. They move ahead cautiously, coming to a tree where a woman’s been tied and left to be torn open at the stomach by zombies. On her forehead is carved a W.

Rick tells Jessie he knows what’s going on. She’s shocked, insisting Pete will stop. She tries to explain it away. Jessie’s sure it’ll only get worse if Rick pokes his nose into their marriage. She thinks it’s him trying to get with her. And maybe he does care about her, but he’s just trying to save her from a horrible man. All the while, the rest of the community are standing by, enjoying their lives, blissfully unaware of the shit festering beneath the surface. Rick goes back to Jessie, telling her Sam “asked for a gun” in case he had to protect her.
And in the middle of their conversation, Pete arrives.
Jessie asks him to leave. He gets in Rick’s face and things get physical. The two men fight brutally, throwing each other through the front window onto the patio. Soon, everybody’s there to watch the insane brawl.

The constable pulls his gun to hold everyone back. “You still don‘t get it,” he yells. He’s had enough with this way of life, full of planning and hesitation. While he’s not paying attention and raging, he gets knocked out by Constable Michonne.

“It’s their world,
we’re just living in it.” 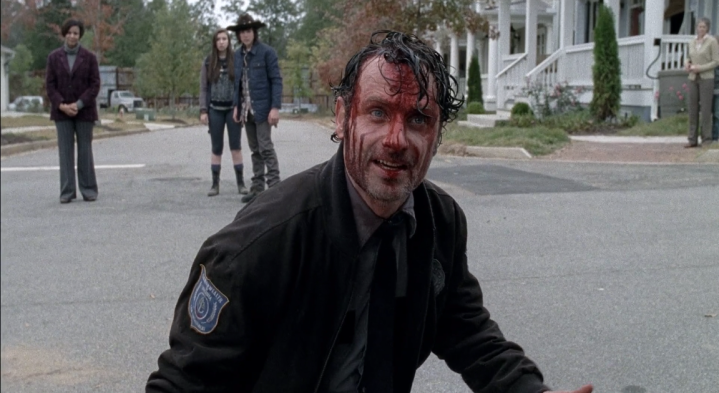 Goddamn! What a wild one. And there’s just a single episode left.