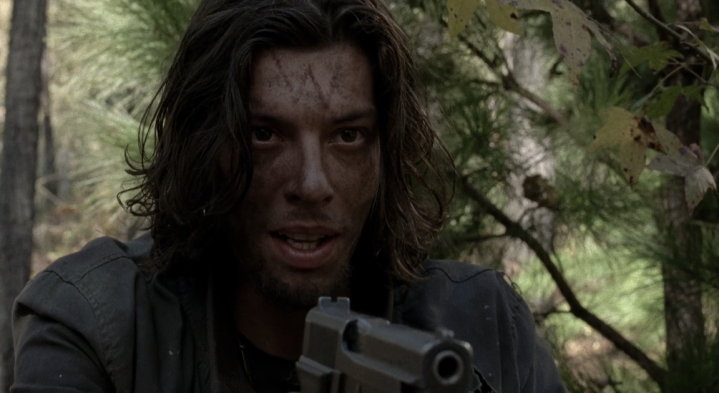 Among the trees, Morgan (Lennie James) sleeps in a crashed car. He sees a lucky rabbit’s foot hanging off the rear-view mirror. He has some oatmeal for breakfast by the fire. A man comes up holding a gun to him. His name is Owen (Benedict Samuel)— he has a W on his forehead. He talks about how settlers put “bounties on wolves‘ heads” when they came here. He’s a greedy man, telling Morgan he wants “every last drop” of what the guy owns. Another Wolf comes out of nowhere, forcing Morgan to defend himself. He knocks them both out, discovering there were no bullets in Owen’s gun anyway. He leaves the men safely in the car, alive, and draws walkers using the horn. He takes that rabbit foot for good measure.

Rick (Andrew Lincoln) is waking up after getting knocked out cold by Michonne (Danai Gurira). He says it’s like waking up in the train car at Terminus all over again. Deanna (Tovah Feldshuh) wanted him locked up. Now Michonne tells Rick that Pete (Corey Brill) is moved out of the house away from Jessie (Alexandra Breckenridge). She’s angry he’s been keeping secrets. Carol (Melissa McBride) pretends to know nothing of the gun taken from the armoury. There’s a meeting called at Alexandria tonight. Neither Carol, nor Glenn (Steven Yeun), nor Abraham (Michael Cudlitz) want to see their friend kicked out. This means they may have to get aggressive. Nobody’s happy.

Maggie (Lauren Cohan) has a chat with Deanna and Reg (Steve Coulter). She says sending Rick away “won‘t work.” She attempts being the voice of reason, advising it wouldn’t be leadership to let scared citizens make a decision like that. She explains they’ve seen so much and Rick’s worry about Pete’s abuse drove him over the edge.
No promises about anything from Deanna.

“Everything gets a return”

Sasha (Sonequa Martin-Green) lies among a grave of walkers. She feels at one with the dead. Like she’s already dead herself. On the road, Aaron (Ross Marquand) and Daryl (Norman Reedus) talk about people the former brought into Alexandria who they had to later send away because they didn’t fit with the community. They soon spy a man on his own in a field. They lose him, though wind up finding a food distribution facility with trucks outside. The pair try opening one and run into a trap— trucks full of walkers, many with Ws on their foreheads. The parking lot starts swarming, forcing Daryl and Aaron under a truck. They’re able to get out and into a vehicle. Only then they’re stuck.

Everything’s rough in Alexandria.
Maggie’s working hard to solve things before the big meeting, whereas Glenn appears to be losing hope, not to mention Nicholas (Michael Traynor) is lurking around acting strange. Glenn sees the guy scale the wall and sneak outside. He follows, and gets a bullet in the shoulder.
When Rick gets home he talks with Carl (Chandler Riggs). His boy’s sure the community will die without them. Dad’s honest with his son about what needs to be done. He doesn’t think Alexandrians understand how things are, but Carl pleads to get through to them.

Daryl finds it ironic he feels more at home stuck in that car than in a house in Alexandria. Aaron recognises something good in him, he knows Daryl is a protector. They opt to make a team effort to get out of there instead of Daryl going lone bad ass. Just as they’re about go, someone starts helping— it’s Morgan! Quite the introduction. He doesn’t want to be part of a community, he’s headed someplace. He needs directions, handing over the very same map Abraham (Michael Cudlitz) wrote to Rick on. Serendipity at work. 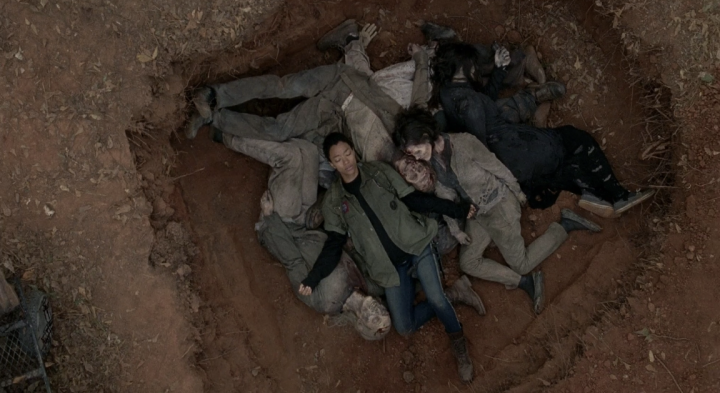 “Why?
Because all life is precious, Daryl.”

Father Gabriel (Seth Gilliam) nearly gets himself killed beyond the walls. He finally does some killing, after all this time. Then he weeps. When he gets back, he talks briefly to Spencer (Austin Nichols), who wants counselling re: his brother. He’s charged with closing the gate on his way in, but doesn’t quite shut it in his stupor.
In the woods, Nicholas and Glenn wrestle, the latter left with zombies on top of him.

Rick is honest with Michonne about all their secret plans. He explains about the guns. She only knocked him out for his own good. She just wants to live peacefully. But no matter what happens, she’s there for Rick. They have to prepare for the meeting. From his window, Rick notices the gate’s left open, so he rushes outside and finds a trail of blood and skin hanging off the door. A zombie has made it inside Alexandria.

When night falls, the meeting begins. Deanna wants to talk about Rick while the constable is busy trying to actually keep the community safe, nobody else realising the situation at the gate. He finds a trio of the undead, having to kill them himself. At the same time, Sasha and Gabriel fight after the priest delivers an impromptu sermon on how their group don’t deserve to be there. And Glenn finds Nicholas again, beating him to a pulp in the woods.
During the meeting, Michonne, Maggie, and Abraham speak to Rick’s character. Perfectly parallels their man saving the community from a threat they don’t even know is out there currently. Deanna tells everybody about what Father Gabriel told her. She believes him. The irony is Gabriel and Nicholas, on the side of Alexandria, are both close to be killed for their treachery while Deanna acts like their community’s done nothing wrong. Yet Sasha and Glenn are better than being cold-blooded murderers.
Rick turns up at the meeting with a zombie corpse. He again tries to appeal to common sense. He’s only ever tried to protect the people around him. That’s when Pete barges in brandishing Michonne’s sword. Reg tries to hold him back, accidentally getting his throat cut. This is the last straw for Deanna, who tells Rick: “Do it.” The constable kills Pete, right when his old buddy Morgan turns up with Aaron and Daryl.

One big uh oh: Owen’s found those photographs of Alexandria in Aaron’s pack. 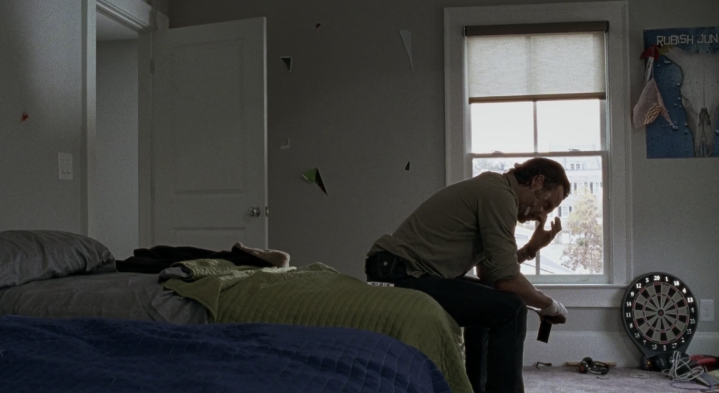 A wild season finale. Many things going on, especially with Morgan returning in Rick’s life. Blast from the past. Not only that, Alexandria has changed drastically in a matter of minutes, and irreparably. Season 6 begins with “First Time Again.”