The title of this episode— “Muluc”— comes from the Mayan zodiac. Water is the ninth sign, also known as Muluc or Offering. It’s a sign of peace and freedom, but also encompasses the challenges we face to maintain those things. It represents paying off your past due debts, which can either be spiritual or physical.

Lincoln Potter and Agent Linares are left wondering what happened when their people were killed transporting Adelita. They’re unsure why they “left the prize behind.” It’s hard to tell what Potter has on his mind at any given time. Part of him likes the thrill of the hunt, even when things are going bad. He’s fucking nuts.

A great cut goes from Felipe, watching the club roll by his butcher shop, to his secret son, Miguel. The cartel boss has many concerns. He’s trying to keep living his bougie lifestyle while continually having to deal with the chaotic mess of the drug and murder world that helps him make a living.
Simultaneously, Alvarez is being abducted by the mercs. Nestor’s not far behind. Except he gets t-boned over the side of a cliff by more of the mercs. He survives with a few bloody scratches. And he manages to catch a number (243) off the truck that hit him, writing it on the mangled hood of his SUV in his own blood. 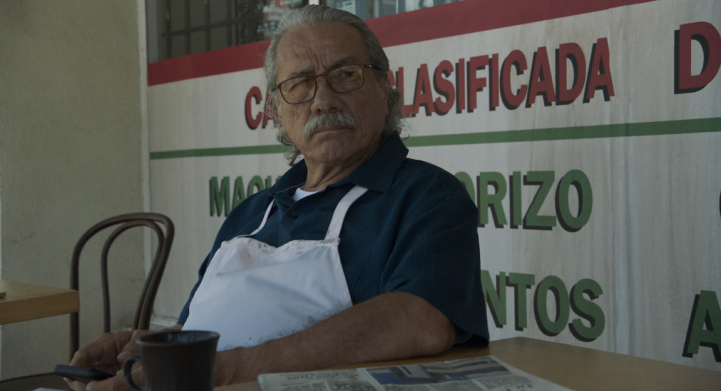 Emily gets a call from Ileana with more inside information about the Agra Park bids. She starts to get a bit scary in the way she’s pushing her friend, now that there’s been money handed over and things are complicated. Ileana’s suddenly having moral issues with what she’s done. That doesn’t stop the cartel wife. It can’t all be blamed on Miguel’s influence, from the way Emily talks about her mother.

At the clubhouse, EZ has Chucky get some discrete info for him. It has to do with Happy. The brothers go see him. He’s got “coded” files about all the club’s dealings. They find the pieces having to do with their parents. Western Union banking numbers trace back to Sonora— exactly where the Galindo cartel were operating before Miguel took over in the wake of his father’s death. The club turns up and Happy winds up going along for a ride to help with Alvarez: “Jax would want me to help.”

Speaking of Marcus, he’s being beaten brutally by the mercs. He refuses to give up any info. So he’s beaten more and waterboarded. Galindo himself can’t figure out anything useful. He and the MC get together to talk it out. They’re naturally pretty sure the mercs have something to do with it. They’re interrupted when Emily comes to speak with her husband, and it pisses Miguel off. He orders his wife be taken away. Awkward for EZ to be there watching. That’s when Nestor’s brought back, beaten to shit. He tells them the number 243 he saw under the fake towing sign. Gives them something to work with, no matter how small.
Alvarez is having fingernails removed and finally he’s reached a breaking point. He asks to get word to a couple brothers. What he’s actually doing is sending a signal. Angel proves he knows classic literature, talking about Don Quixote, and it leads them to the translation of “two windmills.” Like the ones right outside where Marcus is being held. “It’s the little things that hurt the most”

EZ and Emily meet in secret at the butcher shop. It’s hard for him not to remember the old days. She’s there looking for a favour from him. She tells him about the Agra Park bidding process and that a Chinese competitor bribed someone in City Planning. She wants this project to work, so she has something decent to hang onto, no matter if it’s funded through blood money. Somehow Emily believes this is the “other world” as opposed to just another extension of the cartel. She’ll use EZ to help make her latest problem disappear.

The club discovers where Alvarez is being held. Soon, they’re staked out in the hills nearby. Coco takes out one of the men outside. Even Miguel has come along for the ride on this one. Angel heads in stealth to take a look for anybody else around the outside of the place as Coco stays on sniper duty. After a few minutes, they lay siege to the place and get Marcus out of there. They let him beat the head merc to death with a heavy wrench before leaving.
We do see a little later Potter tries to get hold of the mercs with no answer.
His next move is to start digging into Felipe’s past as Ignacio.

Across town, EZ goes to visit Marlon from the City Planning office. Turns out that the two kind of know each other from baseball back in the day. Bit of a weird meeting, as if it weren’t weird enough. Eventually the prospect gets around to chatting with Marlon about the Agra Park project. He tries to make clear how things need to go from here. Marlon starts to figure out too much and get too personal about Emily, whom he calls a “cartel whore.” Shit. Not a good idea. It just pisses EZ off. But Marlon pulls a gun, and this  ends up with him accidentally getting shot in the head. Perfectly, it already looks like a suicide. What will the biker do? 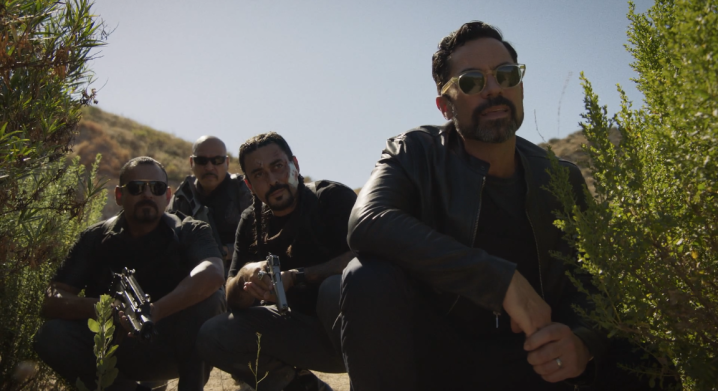 “The boundaries now, between the worlds,
are just harder to see.”

Intense stuff, as the personal begins to intertwine with business more and more.
When will the secrets of Felipe be fully revealed to all?
Is the situation with EZ going to lead to more troubles? You know it will.