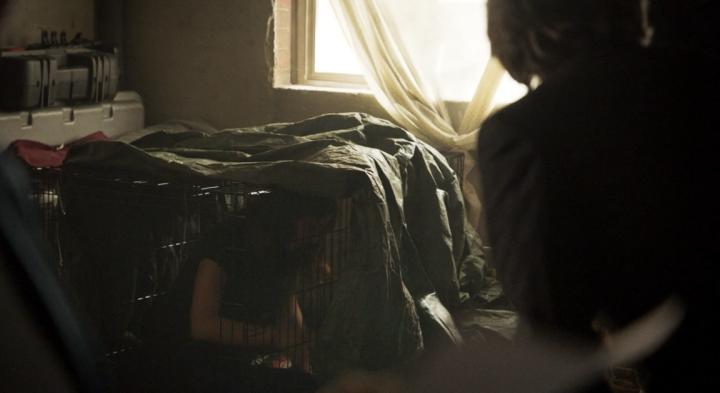 Xquic (sometimes known as “Blood Moon” / “Blood Maiden” in English) is a mythological figure known from the 16th century Kʼicheʼ manuscript Popol Vuh. She was the daughter of one of the lords of Xibalba, called Cuchumaquic, Xibalba being the Maya Underworld.

Lincoln Potter and Agent Linares go to see the mercenaries. Potter’s particularly unimpressed they’ve kept Adelita “in a fucking dog cage.” He calls them “troglodytes” and gets the pregnant rebel out. Adelita refuses all the patronising offers of help. While she washes up, Potter wonders why Galindo helped them with Adelita, and why his help isn’t really helping them.

Miguel gets to stay at home in his nice, comfy palace with Emily. He feels guilty. The way he speaks about Adelita starts to make Emily think he may be in love with Adelita. He denies that. Father Gore continues to wonder if Miguel is actually the father of Adelita’s child and not Angel. That’d be a wild one, especially considering the family secrets we’ve found out recently. 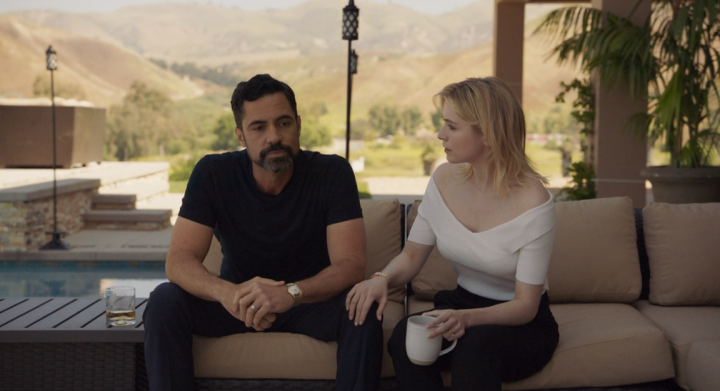 Back at the clubhouse, Angel and EZ arrive, greeted angrily by Bishop, Taza, and Hank about what happened with the Swole Boyz. The prospect speaks out of turn, prompting big brother to “take the hit” himself at the table. They get a call from Alvarez about the mercs and Adelita. That’s when Felipe shows up. Without words, he and Angel acknowledge the truth about their family.

The club meets up with Alvarez and Galindo before they head into the tunnels to cross the border. Bishop talks to Miguel about what’s going on with Potter and Adelita. The cartel has its own ideas about Lincoln, whereas the M.C. aren’t entirely willing to trust the government. They all meet with Palomo, who hopes to find a way to bring Adelita back home to her people.
Things get testy when Angel makes a big deal over stepping back for a moment. He’s letting his feelings about Adelita cloud his judgement, and it puts him at odds with the club’s leader. Bishop isn’t happy with him. “We settle it now,” he says, before telling Angel exactly what’ll happen if he’s disrespected again. Angel gets physical. Before anything too bad happens he tells everybody: “That‘s my kid.” (Might make things real shit if it’s not actually his child.) At least Bishop and Angel aren’t at each other’s throats now. Meanwhile, Alvarez has tracked down the safehouse where the rebel leader’s being kept, and Potter’s looking to figure out whether Miguel is fucking with him.

Potter feels a lot less confident about things. He “can‘t read” Miguel, after confronting the cartel leader by surprise. He has Agent Linares enact “Scenario Three” with the mercs. Who knows what the hell that means— though we’re sure to find out!

EZ’s trying to convince Angel he’ll be a “good father.” He reminds big bro he’ll always be there to remind him he’s a good man at heart. The rest of the club spot armed men transporting a woman with a baby bump. The Mayans suit up. EZ’s not as quick as the others. Does that perfect memory of his remember something he’s seeing, or not seeing? The club heads out and follows the vehicle full of armed men closely.

At the butcher shop, Felipe receives a visit from Emily. She’s been snooping around in Dita’s things. Hard to tell her intentions. She starts to talk about Dita. He doesn’t have much to say, until Emily produces a picture of him— Ignacio— with Dita years ago. She went poking around in the family records, finding evidence of Felipe being with Dita “every time she left Sonora.” He tells her this piece of history will only bring pain to the people she loves. Will she keep the secret?

The pregnant woman the M.C. was following with the armed men is, in fact, not Adelita. Bishop and the crew hope that Alvarez can intercept the other vehicle. This brings EZ back to the car he saw on the street before they left to follow the vehicle. He remembers a man and woman inside. It’s possible “everything blows up” if they can’t get hold of Adelita before Alvarez crosses to reach the transport first.

Soundtrack: A version of “Black Is Black” by Los Bravos plays in the car

Potter and Linares supervise a piece of the border wall being removed. They get word someone’s coming for the transport car, as the Mayans try to take it down without too much trouble. The driver and the passenger each get a bullet, which means the club has to slow the car down somehow. EZ slides in front of the runaway vehicle, slowing it to a stop relatively safe. Angel rushes to get Adelita out of the back. She’s surprised to see him. She tells them to run as sirens are heard in the distance: “This is what needs to happen.” She IS actually sacrificing herself to try keeping Potter busy so everything else in the revolution can continue.

Whoa. Another intense chapter in Season 2!
Is Adelita’s child really Angel’s, or does it belong to Miguel?