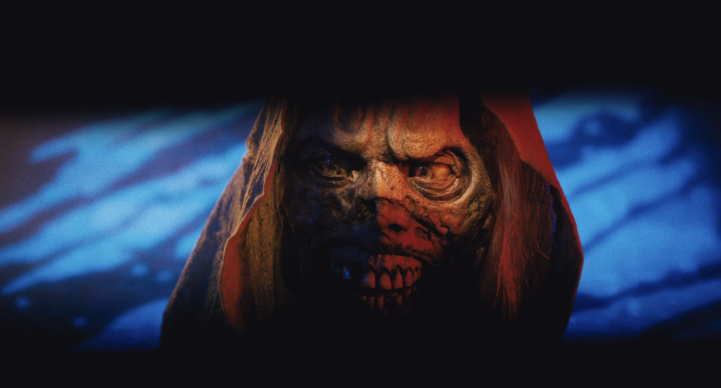 Hurricane Charlie is rolling through a small town, where people are preparing their homes and businesses to try and make it through. Like the Chief (Tobin Bell), looking to protect his town. Him, Dixie Parmalee (Adrienne Barbeau), and Doc (Giancarlo Esposito) are playing cards together when Timmy Grenadine (Christopher Nathan) turns up. He’s looking for a case of Harrow’s Supreme for his dad. That’s about all they have, apart from “cat and dog food.”
The town’s barely hanging on, but the storm may be the final “nail in the coffin” for the place apparently. Right now everybody’s being evacuated. Chief and Doc pass away the time by fucking with each other, particularly when they’re cooped up in a storm together. Suddenly, Timmy mentions his dad has changed somehow, that he’s sick. He’s afraid and doesn’t want to go home, worrying Dixie. Chief and Doc offer to go over to the house and deliver the beer. The kid lets them, though he’s obviously shaken. The Chief mentions a man called George Kelso, telling Doc how George saw something “in the sewers” that spooked him bad. That’s the last time he’s seen someone with a look like the one he sees on the kid’s face. 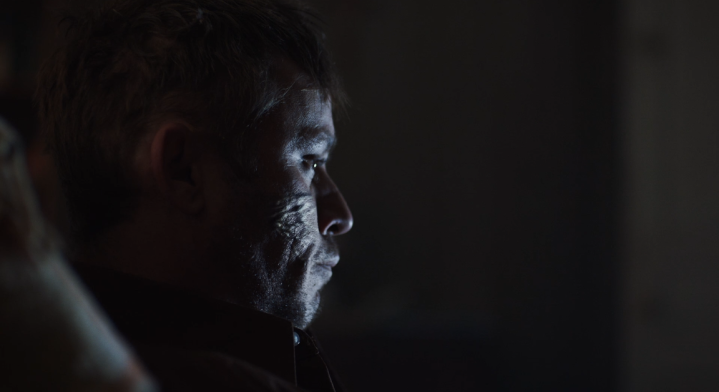 When the men are gone, Timmy talks to Dixie about when his mother Martha died. His father Richie took it harder than anybody. Toxic masculinity kept Richie crawling into a bottle. He’d tell his son how “real men don‘t cry.” He would drink right from the time he got home from work. A slow descent into alcoholism fuelled by a flawed idea of masculinity took its toll on Richie.
And that was only how things started. It got worse.
Richie made money in drinking contests. He’d keep promising Timmy: “I‘m gonna quit one day.” But the day simply never came. One night he got sick and started coughing up a weird mixture of blood and other disgusting stuff. The next day, Timmy found his dad passed out on the floor. There was gooey stuff all over the place. Soon, dad was sitting in the dark watching soap operas and asking for more Harrow’s, and his son would run off to fetch it for him. All the while something was starting to grow in Richie, under his skin.

Two weeks later, things hadn’t changed. Richie would never leave his chair, watching TV and drinking Harrow’s constantly. Timmy was playing errand boy to his dad’s alcoholism, afraid of what would happen if he didn’t. And he was trying to deal with the death of his mother, yet all dad wanted to do was get drunk.
Over at the house, Chief and Doc find the Grenadine place dark. They shine a light inside and head through the door to find the heaters on bust. They call out to Richie, but they get no answer. Then they see a door knocked down to one of the other apartments, greasy hand prints on it. After that is the goo on the staircase, and the air seems to get thicker.

Timmy keeps telling Dixie about his dad. Richie wanted his Harrow’s heated up after a while, and he wanted the heat turned way up, too. He’d become a creature. He was oozing all over, hidden under a blanket. We see bits of this as Chief and Doc head in to look for Richie, discovering all sorts of decay and rot. The place is so warm the walls are sweaty. There’s vegetation on the ceiling and the floor.
And Timmy tells Dixie about how dad has been asking for more than only beer.
First, he ate animals. After that it was left to Timmy to find more food. So he led a couple sacrifices to his father. This is the grisly scene Chief and Doc stumble onto in the bathroom at the Grenadine place. Chief tries shooting the creature when it appears. That only gets him swallowed into its guts while Doc watches on horrified. “The end of everything” is starting right there in the town, as the gray matter creature splits apart, multiplying, reaching out into the world. 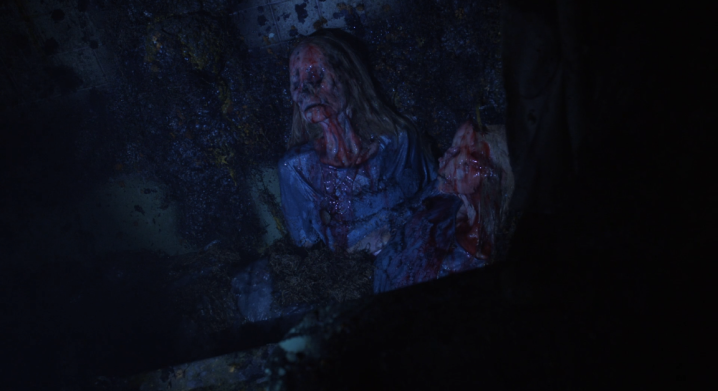 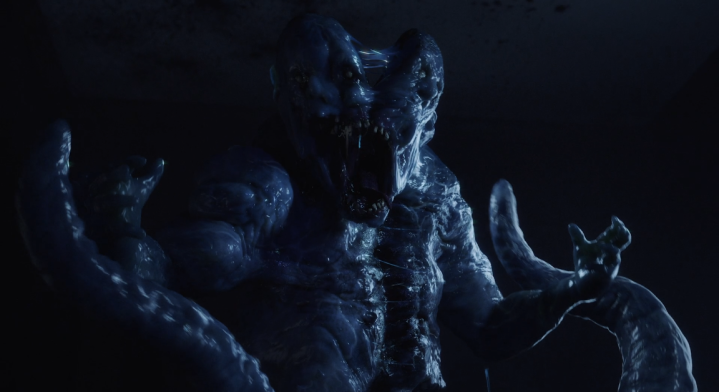 A little girl named Evie (Cailey Fleming) has a brand new dollhouse. It’s her prized possession. She maintains it meticulously like a real home. She rushes back after school to play with it rather than even chat with her dad. When she gets upstairs, she finds something inside that wasn’t there before: a head. “Who are you?” she asks it. She knows she didn’t put it there. The head looks like a zombie, with blood around the neck. The family in the house almost look scared. There are other things moved. Even the head moves places when Evie looks around, and the blood on it feels real.

After Evie gets home from mom and daughter movie night, she finds the people in her house have moved again, as has the head. The dog’s outside the house. Evie is confused, and worried. And the head moves more while she’s there, without her noticing until it disappears. It shows up on the bed. “You don‘t belong here,” she tells the head. She’s sure the dollhouse is haunted.
Evie’s father Randy (David Shae) thinks a dollhouse is good for building identity. He and his wife Marsha (Rachel Hendrix) encourage their daughter. They bought the thing from a semi creepy-looking dude named Mr. Ogman (Guy Messenger). Meanwhile, Evie’s got a policeman to watch over the house. She’s got him on the case to figure out what’s happening. She’s also begun to say grace at supper, in hopes of driving away the bad stuff in the dollhouse. Upstairs, she finds the policeman looking in the attic while the scared doll family stand at the bottom of the stairs. When she talks to her father a minute, she looks back to find the cop is dead— his head’s been cut off. The frightened family have grabbed the gun, trying to fend off the head’s dark influence. All Evie can think to do is try and get “a priest or a rabbi” to help with the house. She wants something “spiritual.” Mr. Ogman doesn’t have much else, other than a Native American doll. The little girl decides this is a perfect idea. She places the Indigenous character in with the Smithsmiths and the family welcomes him. All Evie can think about is the doll family, even while with her own. She rushes back upstairs later to see that the Indigenous man is searching for the head while the family wait. Then the Indigenous man loses his head, as well.
The zombie head is closer to the Smithsmiths than ever. Soon, their heads are all gone.

Evie grabs the head and flings it to the floor. But she won’t be able to rest knowing it’s still in her room. So she looks all over for where it fell. It’s under her bed, and now it’s the size of a real head. She puts it back into the house, closing the wall up. “No more of the head,” she says. This leads to her decision to sell the dollhouse. She’s growing up. Or at least she’s trying to escape, anyway. Solid opener for the series! Father Gore loves the story “Gray Matter” by Stephen King, so it was a treat to see it so well adapted, and so gross. Excellent. Young Cailey Fleming does a fine job in her segment, showing off the chops she’s been developing over on The Walking Dead as Judith Grimes.