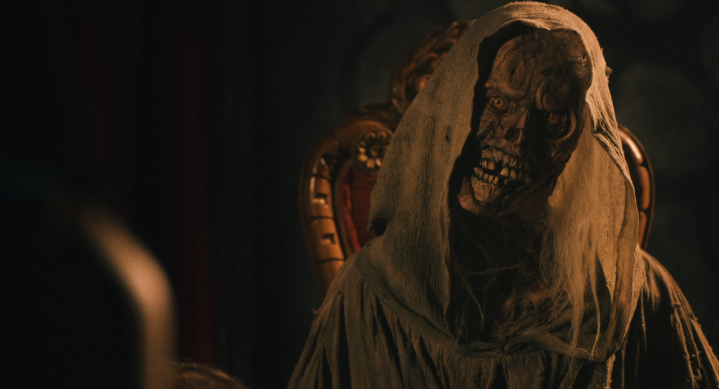 It’s near the mid 1940s. American troops help the Allies fight against the Nazis. In a German forest, U.S. B-Company fight closely against Hitler’s army. There are other dangerous things in the woods, as well. Like nasty wolves. Right now, some American soldiers are able to get out of the onslaught to hide out in a building. Inside is a prison-like cage. There are also bloody hand prints on the wall, as well as scratches everywhere.
Then they find Nazi corpses slashed into bloody shreds.

“Boo fucking hoo,” so it’s a few dead Nazis, right?
Maybe there’s worse. We get a glimpse of a Nazi commander, Schmelzgerat (Jeffrey Coombs), whose son has been killed by the Americans. He’s out for revenge, to make them pay.

The soldiers find new worries when a woman grabs Pvt. Rivers from through a cell door, and he immediately turns to fire on her. She’s locked inside with the keys to her own cell. Worse, people will have heard the shot. They manage to get the keys and get into the cell, attempting to help the woman, who’s yelling at them in French. One of the soldiers, Quist, tries to kill the woman, and this puts the platoon at odds. “War changes a man,” he tells them, before locking everybody in the cell and leaving.
That’s when the men discover the woman’s body can heal itself.
She “cannot die.” She’s been cursed. And you can guess how— she’s a werewolf. 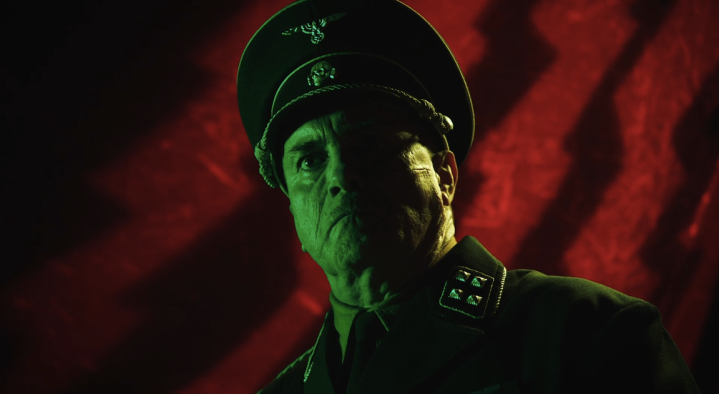 Now, Cmdr. Schmelzgerat has the place surrounded. He offers them a “quick and painless” death if they give themselves over willingly. If not, it’ll be a brutal and vicious process for them. There isn’t much for them to do. Although they have a werewolf in there with them. Could be good to let her loose before she decides to die. Captain Talby challenges Schmelzgerat to come in after them. In the meantime, the woman gives the soldiers each a bite.
It’s Nazis v. American werewolves this time around.
Normal bullets do nothing to supernatural wolves, either!
Later, Talby catches up with Quist in the woods to repay his betrayal. 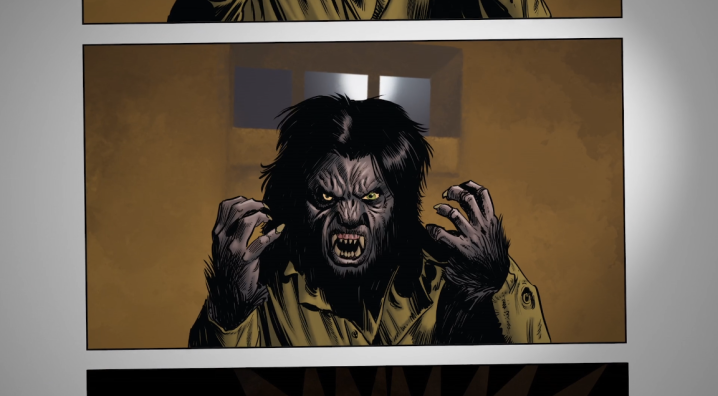 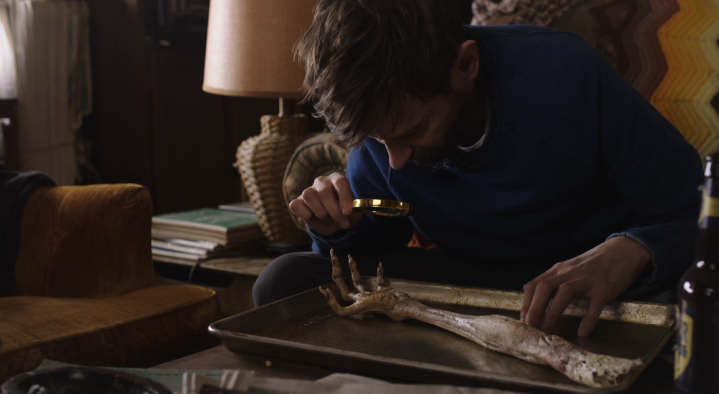 Clark Wilson (DJ Qualls) thinks there’s “pretty weird shit” happening around him. He hears strange noises at night in his house. So he grabs his stashed gun and goes looking for an intruder somewhere inside. He finds something strange and horrifying in his deep freeze.
First, he goes back to talk about his “passion for found objects.” He likes to discover abandoned things. He likes the provenance of everyday objects, where they came from, how they used to be useful to a person, and so on. Such as a finger, like the digit of a witch or some creature, that he found in the street. He took it home. We hear more of his sorta sad life. He drinks Harrow’s Light— a throwback to “Gray Matter” and a light version of the beer brand dad drank— and laments the good life he’s lost.
Then he notices his found finger’s special. It sucks up some spilled beer he knocks over on his desk. This makes him be sure to keep the item in mint condition, placing it in a container in the fridge. Meanwhile, Clark deals with “fucking vampires” calling to collect on debts owed. Things really aren’t going well, and he wishes he could have vengeance on the world, at least those vampires, anyway. 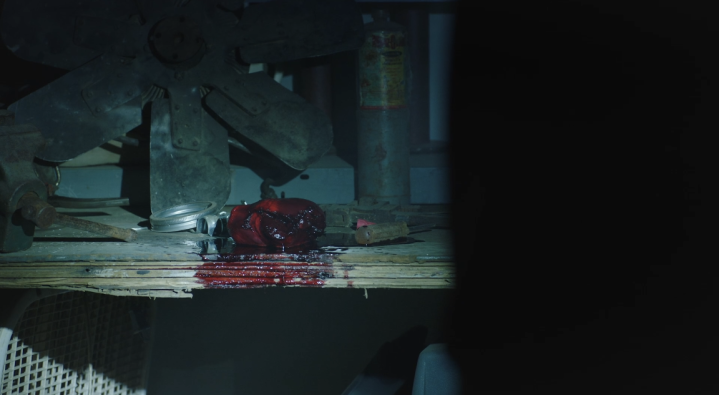 The “American dream” and “domestic bliss” are far from Clark’s reach. He used to be close, or so he thought, and that all went away. He soon notices the finger has disappeared from the fridge. He finds it on the floor not far, and it’s gradually becoming a hand. After 24 hours, it became an entire arm. He doesn’t even feel like an adult, as if he can’t figure out what a grown person would do with a strange discovery such as this appendage growing in his house.
He locks the arm in the deep freeze. But the appendage escapes.
Clark feels abandoned. So we’re back to the beginning of the episode once more. He goes back to the deep freeze, where the arm has turned into a fully grown creature of some sort. It’s holding a matted piece of hair in its claw. And Clark notices a torn out heart dripping blood off his work bench. At the door is a convenient visit from Detectives Mosley and Walsh, looking to talk about his ex-wife Samantha. She’s dead.

After the cops leave, Clark is terrified to see the creature is on the move around his house. The thing doesn’t attack him. They start to get friendly somewhat. He names the thing Bob, of which the creature approves. He starts looking after Bob like a child, as if this was the family he’d always wanted. Little Bob goes to sleep at night in the deep freeze, purring like a cat. He likes popcorn and watching long form TV.
And Bob proves to be useful for other things. Like dealing with a “Nazi bitch” debt collector who keeps bothering Clark. The police keep coming back, too. Because Bob has been going other places, such as visiting Samantha’s kids. He’s a bad boy. This leaves Clark with all kinds of body to dispose of, and he winds up caught. He explains to the police how Bob loved him, trying to eliminate people from his life who were hurting him. Now he resides in a padded room with only the memory of Bob. 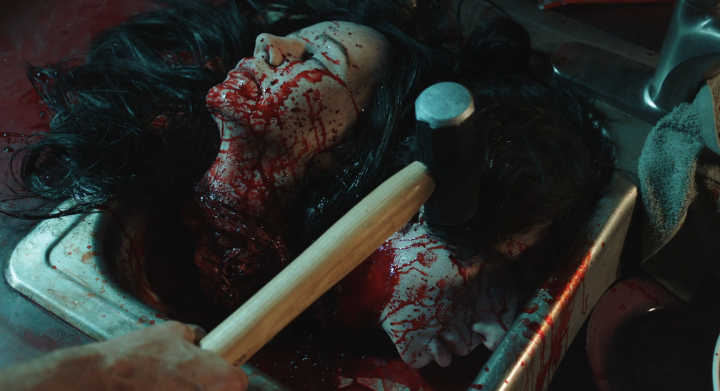 Another fun episode.
Love that the spirit of horror + dark comedy is alive here!