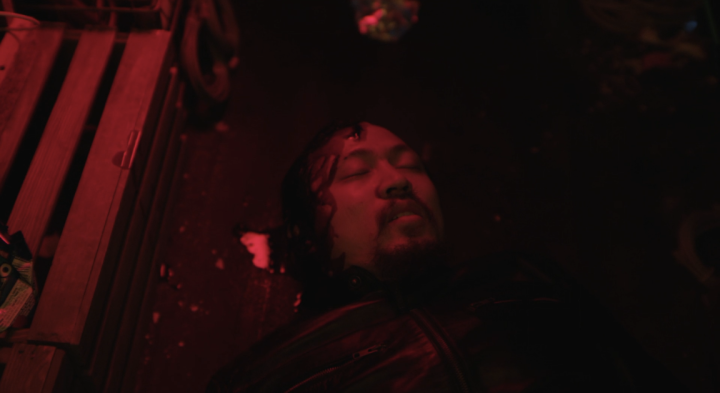 Elliot and Wellick are being spied on by one of the Dark Army’s operatives outside, who heard everything they were talking about prior to the hacker shutting Tyrell up. This leaves a mess to clean. The hacker’s going to wipe all digital traces, and this should keep them from any troubles with the Dark Army. For the time being.
While Darlene is out there having a near mental breakdown, her interview tapes are being used as a masturbatory aide for Dominique at home. Dom’s horny, online cruising using IRC. She’s obviously been on there before, getting a message from a familiar username. They talk, but mostly she’s joyless, longing for Darlene. Weird stuff when Dom discovers the guy she’s been talking to is actually a woman. She decides to invite her over. Bad idea?

Things are tricky when Wellick plans to burn the van with the body in it. They stop at a gas station, and after they come back out the van’s gone entirely. Is it the Dark Army watching? Or, did someone steal the most inconvenient vehicle at the most inconvenient time? OR, is the guy still alive? Worse, there’s no cell reception and no phones working at the gas station because the internet is down. Things get worse because the woman in the store recognises Wellick, complicating their evening. He denies it’s him. And Mr. Robot lashes out to try getting them on the road again, pissing the woman off. 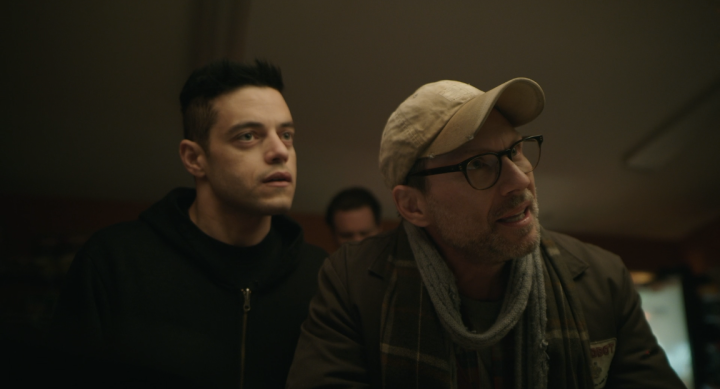 Darlene makes a deal with a drunk Santa Claus so she can get access to his car. She and Santa have a conversation about the “pain is just too much.” Could be some perspective for Darlene here. Could be she’s learning something about her brother through this man. At the same time, Elliot and Tyrell are walking through a shortcut the lady told them about, trudging through the snow. Wellick wonders if the hacker’s ever thought of giving it all up, getting away. But Elliot’s got a one track mind, and simply replies no. After a while there are noises in the dark trees. Tyrell sings “a Christmas song” in his mother tongue, which annoys the hacker. He then begins to wax philosophical about their differences in identity. It isn’t long and there are lights from a nearby road.

At her place, Dom has new friend over. They flirt a while, then they dive right into one another. When Dom goes to the bathroom it’s filled with candles, and the tub is filled with water. She turns around and her would-be lover is wearing a Dark Army mask. “Realise you‘ll never be free,” the woman says, drowning her.
All of it’s just been an extended bad dream. It shows the paranoia Dom’s feeling, and loss of autonomy she’s experienced since getting mixed up with the horrors of the Dark Army. Life will truly never be the same for her again.

Then there’s Darlene, dropping off Santa and realising the car she’s taken isn’t even the one belonging to this guy. She also tries to help the dude, but it turns out she’s had no real clue what the drunk Santa’s been talking about this entire time. This is really a bunch of role play. Darlene’s been experiencing parts of her relationship to Elliot through Mr. Claus, and she’s starting to gain clarity. “Some of them were just born to die” Wellick is convinced their walk in the woods “ends with death,” wherever they go. He also thinks Elliot has never cared about him as a friend. The hacker confirms that’s the truth. Wellick’s deciding not to go on and sits at the side of the road until Mr. Robot takes over for Elliot, seeking to get his friend out of there. Part of Elliot does care about Tyrell, and cares about others, yet he’s unable to manifest that on the surface. He decides to go off on the road alone, leaving Tyrell behind, if only briefly. Something in Elliot doesn’t want to be isolated, so he clings to his relationship with Wellick.

On the isolated road, the duo come upon the van slightly off the road. The guy’s inside, beat up in the crash, but alive enough to fire off shots before dying. Unfortunately, Tyrell’s taken a bullet in the chaos. Not. Good. The hacker wants to get his friend to a hospital. Tyrell insists the Dark Army will find them. “I‘m done,” he says, and then walks off into the dark. This leaves Elliot with one fewer friend in the world. An oddly beautiful episode.
Truly an example of the raw emotional power of Mr. Robot.