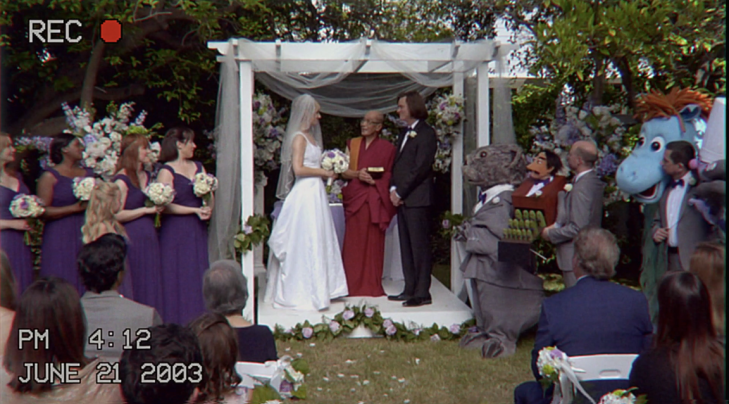 We see a clip from the wedding video of Jeff (Jim Carrey) and Jill (Judy Greer), where the Dalai Lama (Michael Yama) performs the ceremony, concluding with a tradition from the Jewish faith as Jeff smashes a champagne flute under his foot. Cut to the present day, when Jeff’s just run over Peter (Justin Kirk) after being offered a joint to smoke. He sits there, shocked, looking through his smashed windshield. He gets a call and it’s a Christmas carol on the other end, from some “rowdy Pickle Pals.” He finally gets out to check on Peter while a child wishes him Merry Yule on the phone.

Then Jeff goes to the door, letting Jill know what happened. Jeff can’t get through to the hospital, and Jill says they have to get Peter to an operating table or he may bleed out. He and his ex-wife use a toboggan to lift Peter into the car. Before they leave, a bunch of kids are standing on the law watching in sock. Jeff screams “Don‘t do drugs!” and peels out. They don’t get far before they hit someone else: thankfully only a plastic Santa Claus.
While Jeff drives and Jill looks after Peter, he thinks back to when he drove his pregnant then-wife to the hospital while she was going into labour. She called out the directions as he drove, just like they’re doing in wildly different circumstances now. They’re able to get Peter to the ER, but Jeff can’t shake what he’s done. He calls his sister Deirdre— who’s hilariously trying to explain to her nonchalant daughter Maddy that she and Scott are getting a divorce. When she gets to the hospital she advises her brother not to anybody the truth. Jeff has trouble with lies, though he’s “good at keeping secrets.”

Will (Cole Allen) is only more angry at his father for keeping secrets. Not just that, his hopeful relationship has sputtered out before it ever really started. Plus he and his friends are now sure that his dad’s a murderer. Things are going to get shitty for Jeff whether he comes clean about the house or not, because his son seems intent on telling his mom anyway.

At the hospital, Jeff wants to tell his ex the truth while she’s preparing to call Peter’s family with the troublesome news. So the truth is delayed once more. Jill only apologises for Peter wandering into the road and “ruining” Jeff’s Christmas. And maybe Will may be coming around about his father. He sees mom and dad hugging lovingly for the first time in a long time, and despite being drunk looks kinda happy. Then off the three of them go like a family again. But what happens if Peter wakes up and starts saying inconvenient things? For tonight, Jeff gets to sleep under the same roof as Jill and Will again. All built on lies and secrets.

Not to mention Jeff can’t let go of his happy memories with Jill. He and Will have some cookies. Dad asks if his son told his mother about the house next door, and Will just wants to know why his father bought it. Then the kid asks if his dad was ever “a sniper in Lebanon under Reagan,” which Jeff denies. He also says he won’t tell his mom about the house, because he likes seeing them together. Knowing Jeff, he’ll eventually tell Jill. If he waits too long it’ll only make things worse. He really lays it on thick with Christmas morning, too. It’s as if they’re a true family like they were once.
Except life continues.
Peter’s mother Lillian and his semi-estrange Mormon family has turned up at the hospital. At the time being, they’re looking for a donor liver. One of the family offers, only to be denied because he’s a secret drinker. The only potential option left? Jeff and his pristine, straight edge organs. He has to face the fact that taking the life he wants by deception will never make him happy. So he tells Jill the truth about what he did to Peter, using a swear word for emphasis: “I fucked up.” “Only use a bad word
when no good word will do”

All the beautiful, gut-wrenching irony of this show kills me! The fact Jeff’s last drink was 2003, at his wedding, which now plays a part in allowing him to hopefully donate a portion of his liver to Peter, is so bittersweet. Kidding is an amazing ball of different emotions all intertwined in the most interesting of ways.

“Up, Down, and Everything in Between” is next.