Showtime’s Kidding
2×02: “Up, Down, and Everything in Between”
Directed by Jake Schreier
Written by Michael Vukadinovich

Sebastian (Frank Langella) is overseeing the production of new Mr. Pickles toys. He’s trying to do things to keep interest alive while the show’s not on the air. Then he discovers that his son Jeff has agreed to donate a healthy portion of his liver to help his ex-wife’s new beau. At the hospital, the situation is definitely awkward with Jill sitting across from Deirdre, and Will asking questions about his dead brother Phil. Plus the media are already talking about Jeff’s noble deed. Telling the truth hasn’t made things any better for Jill, and definitely not for Jeff.
And now the surgeons are ready to get to work.

Rather the odd situation, having Jeff across from his ex-wife’s boyfriend as they’re about to be cut open. Immediately things become very strange for Jeff under the anaesthesia— the world turns into a luscious forest with a bird perching right on his chest, and trees sprouting up everywhere.
Yes, Mr. Pickles is in his own invented world at Pickle Barrel Falls where the puppets are all alive. He’s only concerned with getting back to his family, while the puppets are worried he’s come to kill them, or that he’ll kill his family after what he’s done to Peter. He wants to make up for what he’s done, but he’s getting no help from his puppet pals. “Goodbye, cocksucker,” the French puppet yells as he leaves.
We get a glimpse of how Jeff created Pickle Barrel Falls, stemming from his and Deirdre’s absentee travelling mother sending postcards from places like Niagara Falls. His young imagination led him to believe he could walk out the door and head off to find mom. Sebastian attempted to stop him, getting blamed by Jeff for his mother not being around.

The surgeons remove over half of Jeff’s liver, putting it into Peter. Simultaneously, Peter comes flying over the falls in a parachuted pickle barrel, landing in the woods near Jeff. A curious twist! The piece of Mr. Pickles inside Peter has made things interesting. Jeff gets knocked around a bit until he’s “becoming a part” of Peter and making the guy’s anger turn into music/choreography. This may prove to be a lesson for ole Pickles: you can’t bottle up your feelings or, y’know, you sometimes snap and run people down with cars, or explode in other ways with anger and/or violence.

Can Peter teach Jeff something, and vice versa?
Possibly, through the language of song. After a while, Jeff comes to the conclusion he’s angry at himself deep down because he blames Jill for their son’s death. Once he figures it out, he’s released from the struggle in a way. He’s also left behind in Pickle Barrel Falls, as Peter takes off in Astronotter’s rocket back to consciousness.

At the hospital, Jill gets into it with Sebastian and Deidre. She blames them for not helping Jeff, calling the show “a trap” that allowed them not to deal with the ugly qualities of grief. She knew something bad would happen eventually because Jeff keeps everything closed off without actually dealing with things in a healthy way. Both Sebastian and Deirdre play a part in that, albeit at different levels. Neither of them see the part of they’ve played, particularly Seb. 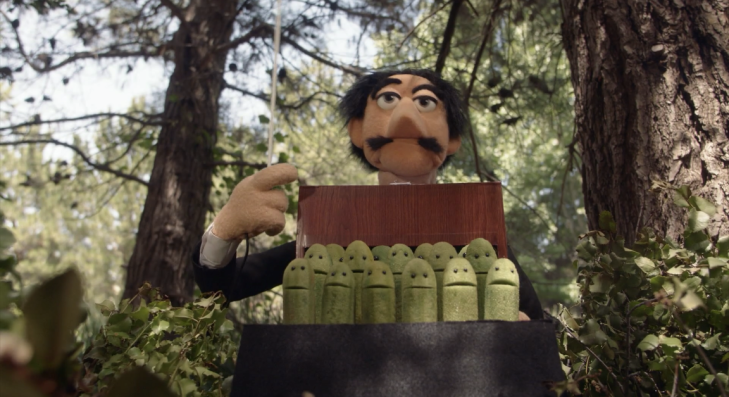 Jeff’s stuck trying to figure out how to get up to the top of the falls. He gets a helping hand from a giant sasquatch puppet— not unlike his father extending his hand to his son, the first time young Jeff ran out after mom into the woods— who lifts him up in his palm. The sasquatch takes Jeff to the top of Pickle Barrel Falls, where they look out over the place Mr. Pickles created for all the discarded things, just like him. Jeff goes over to the old house at the top: his childhood home. He sees himself and Deirdre as kids, when Seb came up with the parachuted pickle barrel to help Jeff get down the falls. In spite of all their troubles, Seb was, at times, a good father to his children. At the same time, he made “a cage” for Jeff to protect him from reality and its tragedies.
When Jeff wakes up, he’ll have to decide whether to continue in a constructed reality, or truly wake up and face the real one. Can he, and will he, do it? Hopefully. First thing he does is fire his father.

A wonderful episode with all the gooey, sappy emotion and the dark, hilarious, confrontational stuff Kidding churns into gold.

“I’m Listening” is next.