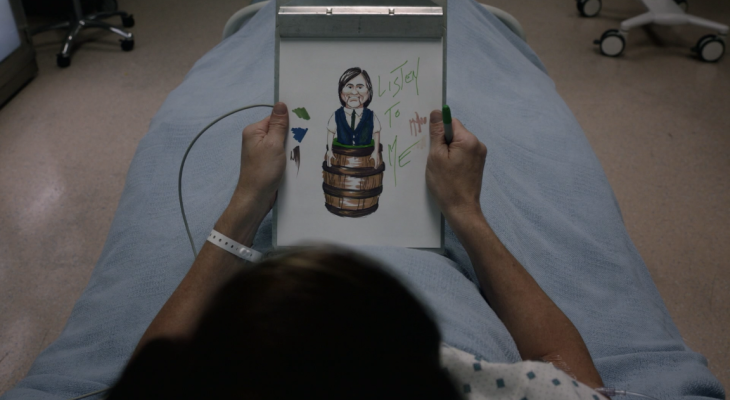 Kids are wondering where Mr. Pickles has gone all this time.
Jeff’s been getting all kinds of “friend mail” from his young Pickle Pals, which is probably good considering his personal life’s falling apart. Even Peter wrote him a letter, too, though Jill’s adamant of no contact with her ex after finding out what he did to her boyfriend. So what does a children’s show host do when he gets that lonely, and when the people who need him most can’t reach him? He starts looking for a way to reach out and speak directly to his many young fans/friends.

At home, Deirdre and Scott are having a tough time figuring out how to handle the divorce. He thinks she’s a shitty mom. She feels he’s a philandering douchebag. The worst of it is Scott digging into their finances and his wife’s not-so-subtle tax dodging, which could well throw a wrench into Deirdre getting any custody over Maddy. Their argument leads her to a freak out, as well as some chemical sniffing when she knocks over her supplies. Her “Did you hear a helicopter?” is a very hilarious, Henry Hill moment.

Although Seb’s claiming to step back from the business after his son fired him, he’s definitely not buying into the Listen to Me Pickles doll. Especially not the way Jeff describes it inadvertently as a kind of paedophilic, Orwellian surveillance system rather than the sweet, comforting toy he means it to be deep down. He just wants to fight the “brain cancer” of social media by making a radical change in the Pickles empire. All Seb can think to do is put his equally damaged daughter in charge of his damaged son, albeit it might do little good.

Who gave the mysterious book to Will?
Deus Mathematica: Math, Magic, & Mysticism has a section about how to turn back time. Perhaps the one-time young magician Will is going to try a ritual. In the meantime, Jill is pushing Jeff to sign divorce papers so they can finalise the end of their marriage once and for all. Neither of them have any idea how difficult it is on their living son, after dealing with the death of his twin brother and, to boot, the crumbling of his parents’ marriage. So he and his friends attempt a magic ritual to warp time. Will ends up finding a secret door in the closet of the house next door, bringing him to a similar door at home. And inside? He finds evidence that Phil’s organs WERE donated— this means he’s found out a lie his mother told, instead of one from his dad. He eventually comes across the boy from the opening scene, who’s got new corneas thanks to one of those donations.

Seb refuses to be cut out of the business. He doesn’t think Jeff should get “unfettered access” to kids in this way, concerned about what might occur if a child calls him up and says they’re suicidal, or if an awkward moment with a parent became aggressive. Any number of things could happen. But the son continues to ask his father to step away. Jeff and Deirdre both have to lean on each other now, in spite of her recent glue sniffing and over half a million dollars of cheated taxes. She doesn’t feel she’s ready for the responsibility of handling the business, or of being a single mom. She rages at her brother for his dumb hair and other things. So, Jeff asks her to give him a haircut. A perfectly symbolic fresh start for the siblings.

“I want eight inches of me
in every child’s bed”

Four months down the road, Will’s got himself a girlfriend, and the new Listen to Me Pickles doll is on the market, in thousands of kids’ homes. For the children who need someone to listen to them, the toy provides a way they can speak directly to Jeff, whose compassion and love shines through to them no matter how far away they are geographically. He sends one along to Peter, too.
Can Jeff actually keep up talking to EVERYBODY, though?
What about the parents who think his toy’s “fucked up“? Doesn’t bother Jeff, apparently.

Another wonderful episode. Always a mix of touching, weird, and darkly comic.