Maddie and Ben are each acting reckless in their own ways. She’s letting Robb get a bit too close to all their secrets which may spin out of her control faster than she’d care to admit. Ben’s doubling up the dosage of mermaid stem cells he’s injecting himself with, and who knows exactly what that’ll mean— sure, the effects are all seemingly positive so far, but that doesn’t mean it’ll stay that way. His senses are dialled up past 10 already. Elsewhere, Calvin’s attempting to get ready for his wedding to Janine with a little bro help from Xander who’s doing his best to help his friend pick out a tux.
In the ocean, Ryn and Cami say goodbye to one of their dead. After that they spy another wounded mermaid a ways off and get hunting. They get to shore and then see Eliza and others, hearing of Katrina’s betrayal. Most of the mermaids are badly injured, too. Ryn’s ready to act, though.

Then what about Ted? He’s digging into Rick Marzdan’s records. A woman at the office’s desk helps Ted, then makes a call to somebody— but to whom? Beth, of course. Not long later she’s at the shop letting Helen know about Ted, and Helen tells her about what he knows so far, the whole incident years ago and then the recent debacle at Carson Sound. Obviously Ted’s not ready to stop digging. 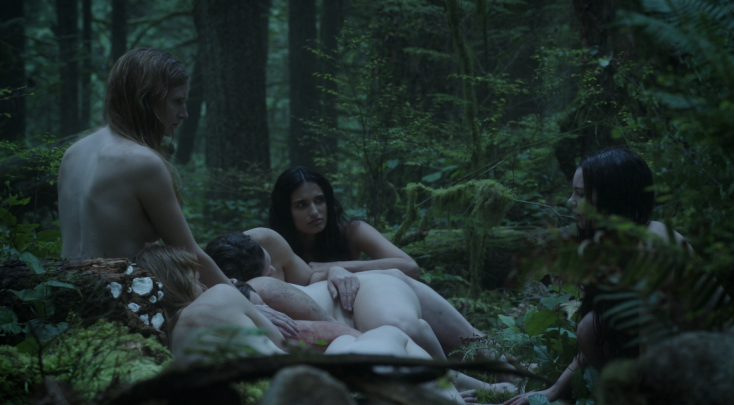 One look in that freezer, plus a few days in Bristol Cove, have Robb all but convinced there are actually mermaids in town. Maddie’s not exactly doing a fantastic job of covering, acting like a guilty murderer rather than a scientific person trying to refute nonsense. That’s not going to help. Meanwhile, Ryn’s back on land to get Ben’s help with the injured mermaids. Ben calls Xander to help, as well. They get back to the injured mermaids with Xander standing by to shoot any threats. Good thing because Katrina and rival mermaids are in the nearby trees tossing spears, and one mermaid is already dead, meaning Ryn is going into ass kicker mode fast.

At work Rick finds himself suddenly confronted by Ted. He later goes back to the ranch where Beth and Helen have the rest gathered, just in case. Safety in numbers. Rick says Ted was curious about “distant relatives” and similar things. He thinks Pownall’s concerned about the family legacy. Except he told Ted about the ranch, too. And that they gather there in times of crisis. Shit.

On the island, Xander saves Cami from a rival mermaid by firing a shot through him. “Now we are good,” she tells her new friend. The woods are treacherous with Katrina and her angry merfolk hunting Ryn’s group. Luckily for Ben he has newfound mermaid strength, serving him well when a merman attacks him viciously. He kills his attacker, running a spear straight through him. While he’s fighting for his life Maddie’s showing Robb more secrets found in Bristol Cove. I love Maddie, but she barely knows this guy! Not a great move, in my opinion. She’s still holding back a few cards, yet she’s giving him too much. He claims he won’t “breathe a word” about it. I have my doubts.
Ryn comes face-to-face with Katrina, and the latter puts her spear in Hunter before they do battle. She doesn’t want to kill Katrina, telling her: “You could come back.” She extends a hand to her. Katrina refuses in dramatic fashion, slitting her own throat with the blade of Ryn’s spear. Whoa. This also leaves the island out there with a few mermaid skeletons out in the open. When Tia and her folk arrive they see the corpses. Then Hunter wakes up, still alive. Will she join Tia? Appears so. Hunter explains Ryn has a mermaid baby, and that the males have taken it to raise. Goddamn, this is scary.

“We leave the past in the past”

Poor Rick feels bad for letting Ted in on the ranch. He’s also surprised by how things are changing. Beth’s got drones and security equipment, as well as guns. They won’t find protecting from anyone else. They have to do it themselves. Things in Bristol Cove, particularly up at the ranch, are changing quite a bit. Ben and Ryn fill Maddie in later on everything she’s missed. Ben’s not ready to fully trust Robb, though Ryn is sure she can “be very human” to impress the guy properly. However, as soon as Ryn sees Robb she goes insane, attacking him. Turns out, he’s “from the water“— he’s a mermaid from another tribe. I KNEW HE COULDN’T BE TRUSTED!

Wow, that little twist was— at least for me— unexpected. I thought Robb would turn out to be just another capitalist. Guess I was wrong. Siren keeps managing to use twists and turns in places I don’t always see coming, and that’s one of the (many) reasons I continue to enjoy the series thoroughly. This twist adds a new dimension. What’ll happen next?

“Northern Exposure” is coming up.