Dr. Orson Rudd (Joel McHale) is in Antarctica at a scientific outpost. They’re studying changes in the sea, specifically deep sea. Rudd believes their work will save “a million lives.” The station is full of all sorts, like Channing Carp (Nadia Hilker), Frisch (Brandon Jay McLaren)— whose sketch looks very Lovecraftian, particularly with talk of mollusks in the background, always at home in a Justin Benson-Aaron Moorhead joint!— and others. There are various smaller buildings at the outpost, such as a shed-like structure where Kasper Skua (Michael Adamthwaite) dives below the ice into the water below. Right now, Kasper’s having a good deal of trouble trying to make it back to the surface… there’s something chewing him apart, pulling his partner Amy underneath with him. All that’s left is a pool of bloody water.
And something’s crawling out of it. The Narrator tells us an “entity of vast intelligence” is about to take this scientific team deep into the Twilight Zone.

Naturally, the rest of the scientists are terrified, but they have to do something. Frisch wants to go into the water. Dr. Rudd’s not willing to send anybody down if they have no idea what’s waiting for them. Then they notice a cooler on the floor shaking, and inside there’s an octopus. Did the octopus kill Amy and Kasper? Is it the only one of its kind? There are many questions right now, very few answers. Larry (Rancid’s Tim Armstrong) wants to kill the creature, however, Ling (Michelle Ang) is strangely protective over it. 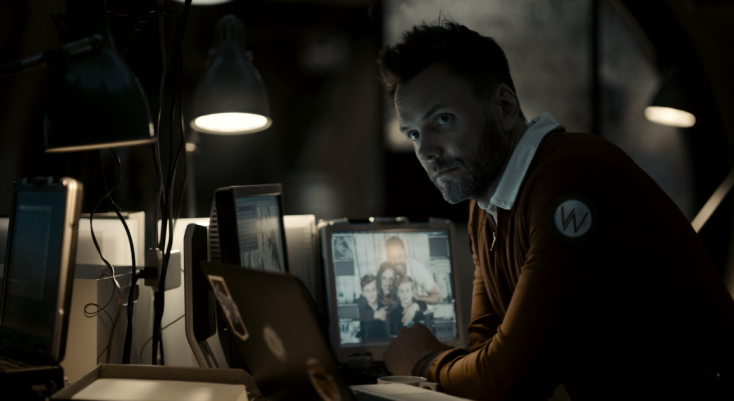 Despite any hesitation, Frisch takes a dive.
A few moments later and he floats to the surface with Kasper’s corpse.

The crew begin hearing odd noises from outside— seals and whales are singing out. Larry suggests that because octopuses have been around “millions of years” it could mean this thing is far more intelligent than they’re giving it credit for, and that the creature purposefully hid itself in the cooler after killing their crew members. Pretty spot on. Ling explains what she’s come to discover so far about the octopus. She likewise stresses it’s “our behaviour” as humans that’s brought the team there in the first place, to study creatures affected by human destruction. She also talks about how millions of years ago, humans and octopuses were the same, but evolution took us on different paths. And this creature’s almost 100% never encountered a human before.
So, what happens when a human goes somewhere it’s not welcome?

What about the fact Ling has opposing ideas of what to do about the octopus? She listens in on Channing and Rudd talking about their plans for the specimen, the one they’ve been looking for so long. Meanwhile, Larry’s left working and watching over their octopus pal, and even he isn’t prepared for the creature’s intelligence, as we see it unscrew a pipe in order to make a daring, slithery escape. Frisch walks in to see Larry’s been quietly attacked, the octopus running its tentacles inside the guy’s nose and mouth. Frisch gets snatched by a tentacle, too. He fights to cut it away and rip it off him, but it’s no use because the creature’s won already.

Just a minute or two goes by and Channing finds the massacre in the lab, though the octopus is nowhere to be seen. She alerts Dr. Rudd and Ling, who survey the bloody destruction left behind. When Channing goes looking for her lost phone, the one Ling’s snagged for spying, she sees an open vent and hears the creature squirming around inside. She gets back to Rudd and Ling, and they realise the octopus has her phone. The creature has now “broken into” Ling’s research. Turns out that Ling has been investigating the “physical mechanisms” of the octopus, in hopes to genetically manipulate human DNA. A bit of mad science bioengineering to potentially create an entirely new species of human. Effectively, a human-octopus hybrid could rule both land and sea. This all makes Dr. Rudd think it’s better to be rid of the creature.
Well, the octopus has much different plans! It’s gonna manipulate things the other way, so sea life can make its way onto land and “put an end to the human species.” They’ve all but put the key to ultimate power in the hands of Cthulhu.

The Narrator suggests humans aren’t the be-all, end-all. Perhaps we’re priming the Earth for a greater species. It’s pure hubris to think we’re the most evolved just because there’s no evidence to the contrary yet. Disturbing and magical episodes like THIS are why The Twilight Zone reboot is an exciting series. Benson and Moorhead are favourites of mine, so it’s been exciting to watch them dive into Peele’s new territory.