Gabe and Hannah escape the city, into the forest with treats. Kayla deals with her Big Bad Wolf.

Jordan reels after the shooting. Kayla's life is upside down. Eddie is questioned by police. 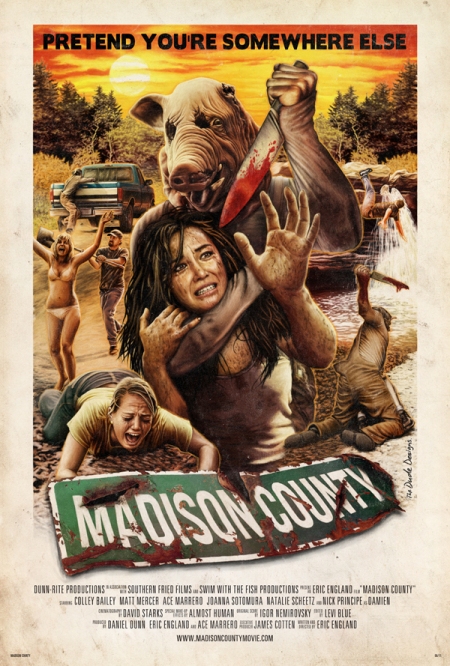 One of the young characters asks the question “where did he get the ideas if they weren’t true?” at an early point of the film while inquiring about a local legend the locals say is only just that – nothing more.  This really represents the sort of tired dialogue and story inherent in Madison County. Granted, the character speaking the line isn’t exactly the brightest seeming sort of guy, I still find it a really rough portion of dialogue. At least Eric England had the sense enough to let the old woman who’s asked the question explain it to the young man. Still, it is a bad piece of dialogue.

Other than this film, I’m actually a fan of England after seeing his most recent effort, Contracted, and I really would like to see his portion of Chilling Visions: 5 Senses of Fear. He definitely has his own unique vision, I just don’t think that vision is most fully realized in the mediocre effort of Madison County. 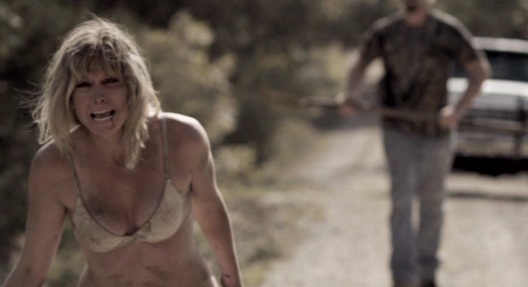 This movie tells the story of a young group who head into the backwoods of Madison County. They’re looking for an author of a book which details the real life account of horrible murders that took place there years before. Unfortunately, Madison County is much, much more horrifying than any book could ever make it seem. Once they’re in the small town, things escalate from one thing to the next, and as the day wears in it’s more than obvious they’ve stumbled across more than the author of some book. And they will be lucky to ever make it out of Madison County alive.

The plot description I’ve given could really sound like that of any other basic slasher movie taking place in the backwoods country of any state on the map. It’s real formulaic setup. I can’t really say much for how it developed, either. There isn’t much going on in Madison County to make me feel like England put a new spin on slasher material. When I said the dialogue is lazy, as well as the story, I don’t mean everything is totally a waste – there are moments of good dialogue, and also a few scary bits now and then. However, it’s the laziness which really overtakes the entire film. For instance, on their way into Madison County, the group encounters the archetypal “messenger” character many horror films include – the old man, often, who gives directions that lead a group into horror territory. On the contrary, here the group opt to not take the road mentioned, as it will most likely get them lost. This subverts our usual expectations for horror movies with this sort of setup.

The first time we see the man wearing his pig mask, I thought that was done pretty well. I was sort of expecting something would eventually happen, but regardless I found the shot itself where he is introduced pretty chilling. We see a nice wide shot of the victim standing on top of a tiny waterfall, getting ready to hopefully jump in the water with two naked young women, and then – BAM – pig mask killer. There’s nothing revolutionary going on here. It’s just a really effective opening to the killing, which begins in full throttle after this scene. Also, the inclusion of the two girls is key – after the victim is stabbed and dumped in the water, the girls casually get out, as if their job was done – and it was, certainly. We get a lot of information here because if there were any hesitations as to whether or not the town itself were all in on the killer’s secret, those are completely dispelled after this death scene. Honestly, this is probably my favourite scene in the film. Effective and creepy.

My problems with this film are the problems I have with many horrors, and slashers in particular. I try not to judge a lot of characters in these movies in regards to real life – you can’t judge how you would react when confronted with a pig mask killer, or Leatherface, or any of these horror movie killers. That being said, if I’d seen my close friend with a baseball bat jammed into his mouth, blood spurting, a man in a pig mask standing over them, I would run until my breath ran out. Instead, the girl here runs until she finds one of her friends. Then the action slows down – she is crying, she can’t complete a sentence.  Sorry, but this is just awful. I mean, anyone would probably just run, even after meeting up with the friend. Yet we’re treated to another real mess of a horror because of ridiculously stupid decisions coming out of very tired writing. If that’s not enough, England has the pig mask killer creep up on the two friends moments later, right behind them on a dirt road nonetheless – but of course neither of them hear him. Somehow he manages to be quiet enough to wait for a really good swing, and still he misses. It’s just situations like this which do nothing for the slasher sub-genre. It makes the characters look stupid. Most of all, though, it makes the writer look sloppy. Basically, after the creepy introduction to the pig masked man, it loses the appeal and reverts back into the same old garbage. The whole section where he is chasing the two girls really grated on my nerves – so many bad choices, not only by the girls but also by the killer. Another example is when one of the girls decides to lure the killer away. I still don’t understand, at all, why the killer didn’t just take a nice swing at the one girl’s neck, kill her, and then chase down the other one. This movie makes no one out to be smart – neither the killer nor his victims. Too many missteps on every side. 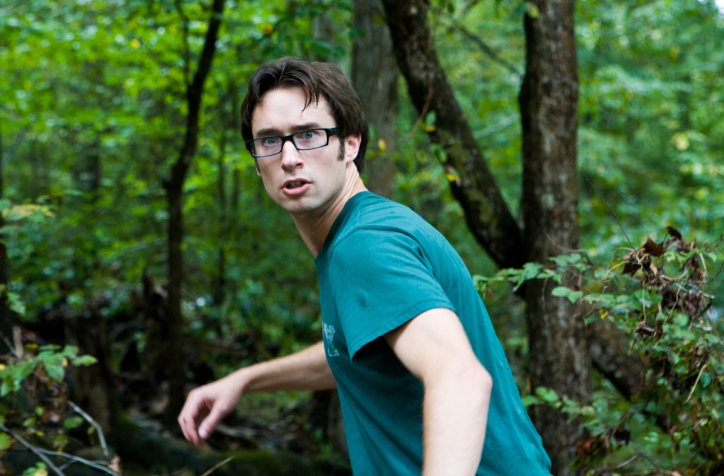 For a slasher, there are a few nasty bits. On the whole, however, I wasn’t overly impressed with any of the horror gags. I like the first knifing, but that was mainly due to the introduction of the killer, and how nice the shot itself looked; pretty aesthetically pleasing overall. Aside from that, the blood wasn’t anything spectacular. Most slashers try to go for an interesting kill or two. Madison County sticks mostly with a lot of axe-work and things of that nature. Not that I don’t like to see a good axe murder on film – don’t get me wrong, I do. I just think a slasher really needs to try and do something different to set it apart from the usual, typical pack. Even if it’s a few neat little bits of blood and guts, or a couple visually cool kills – there needs to be a defining element if the filmmakers want it to go above the hordes of low budget slasher horror movies out there stinking the place to high heavens. I feel like England could have done something much better. His latest film, Contracted, was really great on all fronts – innovative, gross, creepy. This is his second feature, so I don’t expect him to have been a master, but I do wish there was something more to this than the regular fare so often pumped out.

I give this a 1.5 out of 5 stars. There were a couple moments I enjoyed, mainly due to the level of violence, which helped it as a slasher. Unfortunately there were not enough of these to make this anything memorable. I can guarantee I will not be watching this again. I’d seen it once before, and watched it today for review purposes. After this, I won’t revisit Madison County. It’s a by-the-numbers slasher, set in the backwoods, and there’s really nothing special here to take away. If you want something at least more creepy, maybe check out Just Before Dawn or even Deliverance, because this just does not deliver as a backwoods horror. I hope to see more from England, and maybe wouldn’t mind seeing him take on a slasher movie again. If he does, there will hopefully be better characters, dialogue, and all around a more complex, original story than this altogether unremarkable slasher outing.