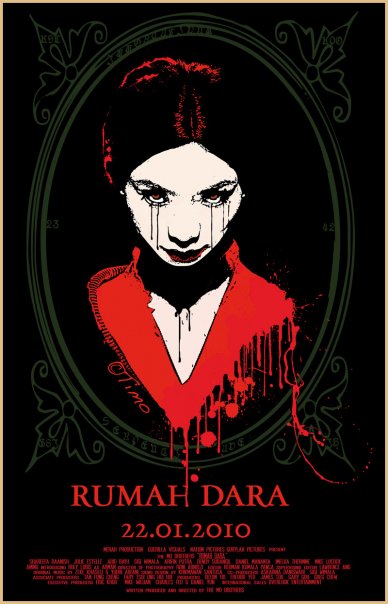 Only discovering Timo Tjahjanto through V/H/S 2 and The ABCs of Death, as well as the fabulously deranged recent outing Killers, I was pleased to be able to finally watch his and Kimo Stamboel’s Macabre. Together, they are The Mo Brothers, and they are vicious. That’s for sure.
What I really liked about Macabre is how it shows audiences in the Western world that people from other countries, other continents, do enjoy good ole gory horror like us Canadians and the Americans down below. Not to say it’s an average film because I really think it’s a fine piece of horror, but I think often hardcore horror movies like this with the setup of a family in a lonely house, all of them homicidal, seems to be pegged as an American style. It isn’t, and The Mo Brothers show us all how it’s meant to be done.

The setup for Macabre is nothing innovative or overly new – a young group of six friends are on a big road trip when they come across a girl named Maya from out of nowhere. She says she has been mugged, and so the group of friends help her; they take Maya to her house, which is coincidentally and conveniently enough for The Mo Brothers, deep in the woods. On arrival the friends meet Maya’s very grand mother, Dara, who is both beautiful and mysterious. Once there Dara is grateful they were able to help Maya, and so the group eats dinner with the family. From then on the once happy road trip becomes bloody murder, literally, and the friends discover what lurks in the quiet house is beyond nightmares and full of death. 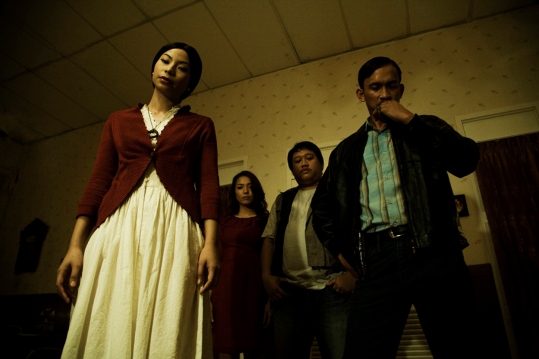 I enjoyed that the group of friends were young, but not so young this was a sort of teen slasher. This could have easily followed too much of a formula. As I said, this doesn’t exactly reinvent the wheel, however, it could’ve really fallen into some traps had it tried to fill the film up with beautiful-looking teens like Hollywood and Western films so often do. Instead Macabre is very frightening because the characters are real, they feel normal and not character types being marketed. Perhaps that’s part of the benefit of The Mo Brothers making this film in Indonesia, they didn’t make it within that Hollywood style system.
Of course there are plenty critics who’ve decided Macabre is derivative of The Texas Chainsaw Massacre and other similarly styled films, most of which all owe to TCM. I don’t think this is derivative. I believe The Mo Brothers know their influences, and they pay homage within a certain context. Outside of a few things there is enough in Macabre for it to stand on its own and not be lumped in as a copy of something else. For instance, just some of the scenes and how they were filmed are great, like the first moment we see the chainsaw – not only is it wildly gory and brutal, there are neat shots from the chainsaw’s perspective, and the way The Mo Brothers have really elegant, beautiful music playing over top instead of actually hearing all the blood gushing and the bone crunching and people crying in the next room… it’s just… perfect. Sure, we’ve seen that cannibal angle before, and certainly TCM did a fine job of really putting the whole “cannibal family in the backwoods” genre into perpetual motion for the rest of film history, but whatever – it works. I can’t knock this film for using these supposed tired cliches because for Macabre those things work.

For one thing, the acting is pretty good in this movie. There are several scenes where people are crying, yelling, screaming in pain. There are also highly intense pieces, especially those involving Dara later on, which showcase the chops of the actors. I really enjoyed the character of Ladya (Julie Estelle) and I thought she was played very personably, not reacting/acting the way typical female roles are written in the majority of horror films whether American or otherwise. I can’t not mention Dara, played excellently by Shareefa Daanish, because it would be insane – she may seem like that typical ‘head of the family of cannibals’ we see in these types of movies, but she is much more, and there’s some eerie quality about her that lingers, maybe it’s in her eyes. Either way, Daanish is a revelation here and keeps much of the horror on that razor’s edge where it can be horrifying and so immersive at the same time. All the roles are well performed, but Estelle and Daanish particularly really draw out the emotional intensity of the film and take it out of the realm of a lot of films that truly are trying to knock off The Texas Chainsaw Massacre.

Another thing I enjoyed about Macabre is how it doesn’t come at you glossy and perfect and shiny. Instead, there is real grit to its look, and I think this has a part in its overall effect on me. The reason so many modern horrors, specifically American-made horror films, are not up to par is due to the fact they look way too glossed over, as if the whole film print had been slicked down with oil. Even when those movies are trying hard to look gritty they still end up coming out like shiny little diamonds. I mean, the remake of The Texas Chainsaw Massacre came off like a big budget fashion commercial with Jessica Biel running around with her pants hanging at her ass cheeks, and all the forced-looking dirt and grime; it wasn’t all terrible, but lord, was it rough. That’s where a film like Macabre keeps it snout out in front of the race, because it doesn’t sacrifice atmosphere and tone for the sake of looking like it has a ton of money behind it. Not that the movie looks cheap, either. Not saying it does, I think it looks great. There’s just a nice gritty quality to the film which keeps it from coming out like a Michael Bay remake special.

Ultimately I have to say this is a 4 out of 5 horror in my eyes. There’s enough to satisfy a lot of areas for horror fans. There is a ton of gore, some style, that grit, and the actors all hold up their ends of the collective bargain. The Mo Brothers are a great team. Having seen the recent Killers, I can confidently say these guys are on top of my list of awesome horror directors I’ll continue to watch in the future. They have that hardcore sensibility while still retaining the good qualities many horror filmmakers lack – the ability to write decent characters/dialogue for them to speak, the ability to create atmosphere and sustain tension, among other things. Plus, I like the final 25 minutes of Macabre so much because it is real damn creepy and the gore, quite literally, explodes + SPOILER AHEAD: one moment when a man in the house finds a picture of Dara from the 1800s is just awesomely nasty, in so many ways. Great, great stuff to finish things off on in a finale that is as outrageous as it is fun.
If you aren’t into subtitles, you’ll miss out. I’m not a snob – I understand some people just don’t process as fast as others, and therefore really get no enjoyment out of trying to both watch and read at the same time. There are some out there who get their nose up and act like “well if you can’t watch a subtitled film you’re not cultured”, but that’s rubbish. My girlfriend loves a lot of great movies, and she does enjoy reading books, but it isn’t her cup of tea to watch a movie and have to read the dialogue; for her, watching a film is good enough visually. That being said, she caves and watches foreign films with me, and enjoys them. But I get that certain horror fans aren’t all that into subtitles – what I say is, throw that out the window, at least for Macabre. It’s worth the time because it’s one of the best gory horrors I’ve seen in the past few years. Might not change the industry, but Macabre is solid frightening horror with a good dose of sanguine streams to satisfy all the gorehounds out there, too.