In my last review, for the 2009 Indonesian gorefest Macabre, I mentioned how there are a plethora of ‘cannibal family in the woods’ films, especially in the past decade since 2003’s Anchor Bay remake of Tobe Hooper’s classic The Texas Chain Saw Massacre. There have been so many movies that copied TCM, but like Macabre there are also a lot of solid efforts in the horror field which emulate and pay homage instead of trying to cover all the same ground.
Wrong Turn, released in the same year as the aforementioned remake of Hooper’s low budget masterpiece, is a film that certainly has its roots in TCM and no doubt there are bits that remind people of it. However, Rob Schmidt’s backwoods horror film does enough to separate it from the carbon copies with some decent acting, creepy characters, and several intense kills, and though it isn’t a great movie it is a head above so many lame, boring cannibal horror movies flooding the theatre these past dozen years.

Wrong Turn begins as Chris Flynn (Dexter‘s Desmond Harrington) travels through West Virginia. On a backroad, he accidentally slams into a vehicle. Chris discovers the vehicle belongs to a group of friends – Jessie (Eliza Dushku), Carly (Emmanuelle Chriqui), Scott (Jeremy Sisto), Evan (Kevin Zegers), and Francine (Lindy Booth). After they make sure Chris is all right, the group discovers someone threw a trap into the road: a length of spiked metal and barbed wire designed to blow tires out. They wander around for awhile looking for some way to call for help, or anything that might give them a hand. The group comes across a sort of shanty-house out in the woods. Chris decides to head inside, followed by some of the others. Meanwhile, Evan and Francine are murdered as they wait back at the car. Soon enough the inbred cannibalistic murderers who live in the shanty, One-Eye (Ted Clark), Saw-Tooth (Garry Robbins), and Three Finger (Julian Richings) return, with the body of Francine in tow, and the rest of the group do their best to hide where they can in the house. The horror has only just begun. 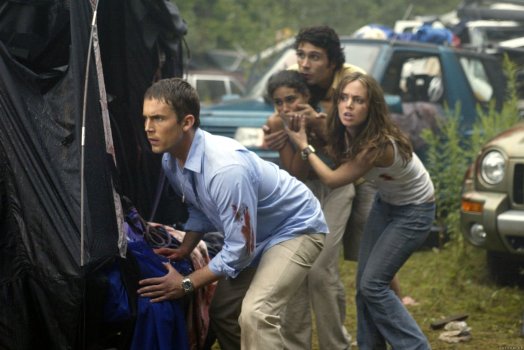 Probably one of the best things Wrong Turn has going for it overall is the fact that Dushku, Harrington, and Sisto are three pretty solid actors. Not that the others aren’t – Emmanuelle Chriqui is probably the only good thing about Entourage – but those three are actors I’ve enjoyed in other things, and they help to carry the emotionality and tension needed in a horror film. So many horrors, especially ones similar to this involving good amounts of blood/guts and disturbing material (inbred cannibal murderers & no doubt they like to rape), suffer due to poor acting. Because a lot of low budget horror gets put out, maybe more so than any other genre, many of those films end up with unknown actors. And unknown actors are fine, as long as they can act. Many times in horror, I think low budget outings try and make up for the acting in other ways, but the fact is you need good actors to sell the emotions and complexity of a horror film. Even if it’s one about inbred cannibals in the woods of West Virginia.
Perhaps my favourite part of the film is when Scott (Jeremy Sisto) tries to calm his fiancee Carly (Emmanuelle Chriqui) after their first close encounter with the cannibals. He tells her: “We’re going home, we’re gonna get married, all right? And we are never going into the woods again.” In another movie, this might’ve come off too sentimental and cheesy, but Sisto really sells it the way it’s meant to go, and Chriqui does well acting off of him. This is just one instance of some actual decent acting, which often times gets left at the door in (too) many horror movies. The weak links are no doubt Kevin Zegers and Lindy Booth, but luckily there isn’t much screen time for them until they meet a grisly, bloody end.

The Texas Chain Saw Massacre is, and always will be, one of the scariest films I’ve personally ever seen with my two eyes. Something about it hit me right in the correct scary spots. What I like about Wrong Turn in comparison is how it doesn’t opt to have this family of cannibals act with any semblance of organization, outside of the fact they’ve got a house and they have not been discovered/caught. In TCM it isn’t as if Leatherface and the clan are criminal masterminds or anything, but Drayton Sawyer at least has a job, he appears as a member of the Texan community, and this is all a part of how the family does their business. With Wrong Turn, these nasty boys are just a bunch of savage monsters; they live in the hills and take whoever they can from off the roads to fill their pots of stew and their freezer. It works because the actors who are playing Three Finger, Saw-Tooth, and One-Eye sell their characters so well.
I think the scene where the group of friends has to hide in the old shanty while the boys arrive home is a great one. Very tense, lots of quiet suspense. The point where one of the cannibals tosses Francine’s body to the floor, wrapped in metal and barbed wire, dead, bloody, is rough – in the best way possible. That whole scene really set things up for the moment where Chris and the others flee the house, into the woods, and the cannibals wake up from their nap. Honestly, it reminded me of a twisted version of “Goldilocks and the Three Bears”.

Not near a perfect horror, I can still honestly give Wrong Turn 3.5 out of 5 stars. You can do much worse than watch this movie if you’re looking for something with a decent bit of gore, quality acting, and a nice handful of thrills. Plus, the inbred cannibals are terrifying. The best way, for me personally, to enjoy these types of ‘survival horror’ movies or the ‘backwoods horror’ stuff is to try and put yourself in the shoes of the characters – how would you truly react? Me, I would run, and scream, and cry, and probably ruin my pants. I’d probably be the first to die, or close to first. That’s why Wrong Turn creeps me out so hard, though it has flaws, and another reason The Texas Chain Saw Massacre does a number on my head because I imagine myself in those scenarios, how bad it would be. The acting is good from the lead characters, the make-up effects and gore is a lot of fun, the cannibals scare the hell out of me – check this out if you haven’t. The entire series is not up to par, but there are definitely a couple decent ones in my opinion, at least better than so much of the other generic crap being funnelled into theatres and straight-to-video/VOD. Worth the time to enjoy some internal organs and terrifying, inbred murderers.