By some accounts, this sequel to the fairly well-done backwoods horror flick Wrong Turn is meant as an homage to 1980s era horror sequels. Now, I do think this was a decent effort at coming up with a sequel to the first film, but I don’t really see much in the way of homage to 80s sequels. What I do see is a movie that wants to keep with the gore from the first, however, aside from the blood and the inbred cannibals being intense, Wrong Turn 2: Dead End falters hard on the acting side of things, as well as with the characters. There’s an overall lack of good dialogue, most of the worthy bits being uttered by either Erica Lerhsen or Henry Rollins, and the actors, most of them, didn’t really sell their characters; they were not only unbelievable, they were wooden and stiff throughout the whole movie. Aside from these flaws, I do like this movie, but I like it for what it is: gory fun.
Wrong Turn 2: Dead End opens with a real ridiculous scene where actress Kimberly (Kimberly Caldwell) drives through the West Virginia backroads. Eventually she hits someone, and believing them to be hurt badly, goes to check – it an inbred cannibal. Kimberly meets a rough end, but this first kill sets up a highly campy, outrageous atmosphere. I liked the gory bits here, yet the tone started right away as an almost comical horror, when this isn’t a horror-comedy at all, even if there are a few jokes now and then.
From there we see retired Marine Dale Murphy (Henry Rollins) hosting a new Survivor-style show that takes place in the supposed aftermath of a nuclear apocalypse, something similar anyways, and then the contestants show up – Nina (Erica Leerhsen), Jake (Texas Battle), Amber (Daniella Alonso), Elena (Crystal Lowe), Jonesy (Steve Braun), and when Kimberly naturally does not show up to film Mara (Aleksa Palladino) agrees to help her douchebag director boyfriend M (Matthew Currie Holmes) by taking the last spot. The rules are laid for competitions and similar activities, then the contestants head off with cameras strapped to a band on their heads, into the woods where cameras are setup everywhere. But cameras and the watching eyes of reality television are the least of their worries. For in the woods lurk more inbred cannibals, even Three Finger (played here by Jeff Scrutton) from the first Wrong Turn, and things will get worse as the night closes in.

The acting, as I mentioned, is what really does not work for this sequel. I think as a director Joe Lynch does a pretty good job. Unfortunately, not all these actors have enough skills to make the characters interesting. Some of the moments between Amber (Daniella Alonso) and Jonesy (Steve Braun) are beyond cringeworthy; Braun has charisma, but the character is one-dimensional and gets truly annoying after the first 5 minutes with him. Texas Battle tried to play the character of Jake Washington well. I don’t know if it was Jake’s dialogue, or him, I just could not stand him either. Also, there were just awkward moments in the script: at one point Jake and Nina (Erica Leerhsen) are running from the cannibals, Nina steps on a nail, so they stop and all of a sudden it’s like the perfect time to have a personal conversation, to develop characters. This moment could’ve worked, and it did in a sense, it just didn’t land in the right place. It would’ve been a good scene for earlier than it happened. There are a few instances like this where I think the script didn’t do Lynch or the actors justice. Henry Rollins was fun, and even he couldn’t save a few of the rotten lines they gave him. If only the screenplay were treated with more care the movie might’ve succeeded in the places where it disappoints. 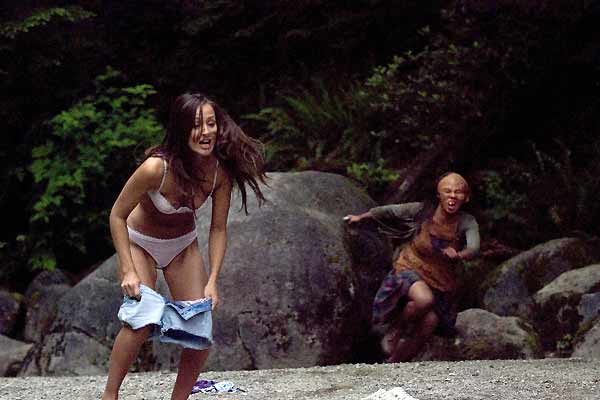 An aspect of Wrong Turn 2: Dead End that does live up to its predecessor is the gore. Even with the opening scene and its ridiculous, over-the-top/completely silly kill, the blood and guts are here in spades, and aside from the beginning there are fun, fun kills (that’s sick, right?… whatever…).
SPOILER AHEAD: one of my favourite moments is when Amber, Jake, and Jonesy discover they’ve been chewing on human meat – what they thought was a plain ole hunter’s barbecue on an open fire – and then Jonesy pukes, and they all take off. The moment of realization is excellent, and works.
MORE SPOILERS: I thought it was excellent that they sort of throw us off, making the viewer believe Mara (Aleksa Palladino) is going to be one of the protagonists of the story, and then all of a sudden – WHACK – axe in the head, out for the count, cannibals chewing on her liberated appendages. Maybe some saw it coming, but I thought how Lynch and the writers set it up, with Mara and M (Matthew Currie Holmes) having a messed up relationship and her offering to become a contestant, that she would end up being one of the “heroes” later on. Pleasant surprise. I like when characters aren’t necessarily safe just because their setup makes it look that way, and Lynch played this card well. 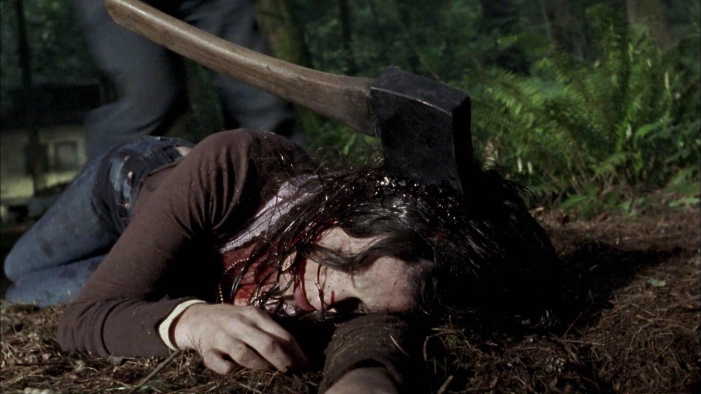 Lynch went hard at the incest angle of the inbred cannibals, which, of course, we know is happening. I just think there was a bit too much needless sexuality – from the cannibals actually having sex, one wearing the scalp and hair of a victim while she gets thrust into by her brother, to one of them having a good wank in the woods while watching Elena (Crystal Lowe) swim in the water. Not like I’m offended. I don’t get why Lynch wanted to include so much of it. Maybe it was to help the disturbing factor sink in, maybe it made things more unsettling, but either way I thought it was needless in the end. Sure – include a bit, I have no issue with that because it’s part of the whole plot of the series, that this family is inbred and they’re constantly creating more little monsters to run around feeding on humans as they please – there is a certain point, though, where something goes into overkill. The sexuality here was too rampant. Lynch did a fine job as it was using the gore to make things disturbing and creepy, I don’t believe those sex bits did anything for the characters, the story, or the fear he was attempting to instill in his audience.

All in all, I have to give this particular sequel in the series a 3 out of 5 stars. It isn’t awful, I think it was a worthy sequel to the first. By the same token, I do see a lot of flaws in the script, the acting, and some of the choices Joe Lynch makes. Lynch is a good horror mind, I do think so, but he didn’t really hit the mark here – no worry, he has gone on to other bigger, better things since. Mostly it’s the gore, the cannibals, Henry Rollins and Erica Leerhsen which made me feel like this movie is worth a 3-star rating. Lynch could’ve absolutely done a lot worse.
Wrong Turn 2: Dead End is, if anything, a good dose of fun with tons of blood, gore, and creepy stuff to haunt you. It’s one of the better in the whole Wrong Turn series, which may not necessarily be saying much, but it’s worth watching. Horror isn’t dead, it’s only hiding the corners. This may not be an amazing or anywhere near perfect sequel. It is a good effort, and its heart + other internal organs are in the right place, even if not every last portion of the film succeeds.