There are a ton of different found footage horror movies hitting the market in the past 5-10 years. Especially now since Paranormal Activity absolutely ran its premise dry with a bunch of sequels and spin-offs and whatever.
Sometimes it’s hard to wade through the ocean of shit that comes out from independent filmmakers trying to break into the business with a cheap, effective little horror that draws on realism to make things scary.
Problem is, there are certain filmmakers who end up just crossing over from realism into exploitation. They take a subject that could be effective if they were to do it as a normal film, and instead create something that crosses the borders of where it needs to go and where it really ends up going.
Megan Is Missing most definitely is one of the films that becomes exploitative instead of being properly scary. There’s no real suspense or tension here, it feels like everything is just being milked for all its worth – especially the sexualization of these teen characters. Supposedly based on a true story, Michael Goi takes on the guise of trying “warn of the dangers on the internet”, as if that needs to be harped on any more than we’ve already seen before. What bothers me is that part about being based on/inspired by a true story. There is very little here based on the true story; I won’t waste my time explaining, but search out the case of Ward Weaver III who murdered two young girls. They met a similar fate to the girls in this film. Apart from that tiny detail, mostly at the end of the movie, there’s nothing else resembling the two. So much of what Goi does is a desperate attempt to make the story found footage, which is never good because the whole concept is forced in and this whole thing could’ve been much more interesting crime-drama/thriller than a sub-genre horror film. 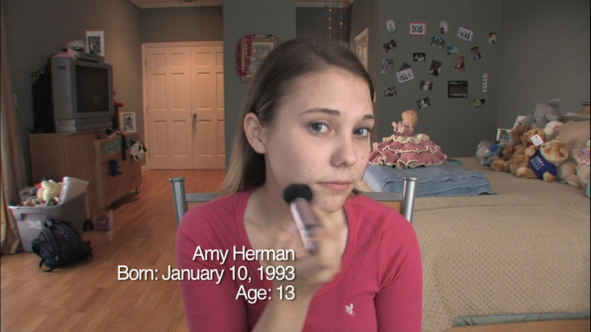 Most of this movie revolves around a fear of internet predators. Now, don’t get me wrong – they are out there. By the hundreds of thousands, even. Maybe more. I just feel like Goi, as a writer/director, has exploited that whole angle of things. I mean, linking this to a ‘real story’ feels to me a desperate plea in order to involve people in the supposed realism of this found footage film.
There are scenes where girls are at a party, making out, there’s a blowjob performed by Megan (Rachel Quinn). Then in another scene, Megan recounts in great detail how she gave her first one at the age of ten, to a camp counsellor; she and her friend Amy (Amber Perkins) giggle and Amy asks questions. I mean, I’m not saying movies can’t be made about teenage sexual issues. Not at all. I just feel like this is totally making the essence of the film seeing how these girls, mostly the character of Megan, are young, sexual women ahead of their time. It focuses so much on the sexuality of these girls that I’m actually disgusted. Again, not saying these types of people don’t exist. It’s just ridiculous how much of a focus Goi hones in on the aspects of her sexuality.
Worst example: even as Megan is on the news reported missing, one of the photos onscreen is of her, tongue out, licking a butter knife full of peanut butter. I mean – really, Goi? Why even include that one? Constantly painting the character of Megan as “slutty”. It’s like a bit slut shaming the whole time. Then, it’s as if her friend Amy is a victim of her own friend’s perceived “sluttiness”. I couldn’t handle it. I thought the way Goi wrote/handled the material as director was just so bad and shameful.

There’s absolutely a way that Megan Is Missing could have been an effective horror. Or even as I said, this could’ve played out just as well/way better if it were filmed as a normal movie, not found footage, and played as a crime-drama with thriller elements. I mean, it could’ve even had a Gone Girl-esque vibe in terms of the whole disappearance in Fincher’s film – there could be built, with a tweaked script, a solid movie out of what Goi had in mind.
Unfortunately somewhere along the line Goi’s intentions were mixed and the lines crossed. It’s like he wanted to make this as a part of wanting to add commentary to a found footage horror. Instead, he began to focus too much on the overt sexuality of the character Megan, he pushes too much then – especially in the final 20 minutes or so – to make things totally exploitative. There could’ve easily been culled a good deal of tension, lots of suspense and dread, however, there’s none of that.

All we get in terms of horror is a shocking finale. Really, it’s just too much. I’ve seen plenty of disturbing movies. This is not one of those that works in an effective sense. Just a load of flashy shock horror trying to lull us into calling this some sort of good horror movie. It isn’t.
I can only give this movie about 1 star. There are elements to this which I thought worked, but only a couple. For instance, I think Amber Perkins did a swell job acting the part of Megan’s friend Amy Herman. It was a tough role and she did what she could with it; not a great script, or dialogue, yet she pulls off the little part of the film she could. Other than that, nothing worth seeing. The barrel shock sort of got me, it’s disturbing, but ultimately there is no substance at all. No style either.
A forgettable, rotten movie that I’ll never ever watch again.