Any time M. Night Shyamalan puts out a film these days, it’s met with all sorts of opinions from those who can’t stand him, as if he’s let them down personally in some way by making a few subpar films, to others who await his return to form since films like Signs and Unbreakable (I don’t even need to mention the Sixth Sense, do I? Great spooky flick). I fall into the latter camp, I’m someone who actually hasn’t bothered to see a couple of his movies (the one based on the manga or whatever it was & After Earth with Will Smith if that’s even the title) simply because they weren’t my cup of tea to start. However, I don’t discredit him for the bad stuff I have seen, like The Happening which wasn’t so much horrible as it was ultra boring – okay, it wasn’t good either, boring and bad. Yet what filmmaker has made all perfect films? Sorry, you can’t tell me one of them, and I don’t care who it is; even the directors I hold in highest regard are some times capable of making a misstep.
With The Visit – a found-footage horror-thriller – Shyamalan recaptures some of his earlier essence with lots of mystery, subtle creeps and moments where you’ll question what exactly it is you’re seeing. Above all else, though, is the fact I found the screenplay Shyamalan wrote really tight, and once the ending came around I was absolutely sold. This is a solid, lower budget styled movie compared to so much of his other work, where Shyamalan gets back to what he does best – scare us. Because I feel that’s the place he works best, with a story made of mystery, fear, paranoia and suspense. All you’ll find delivered here. 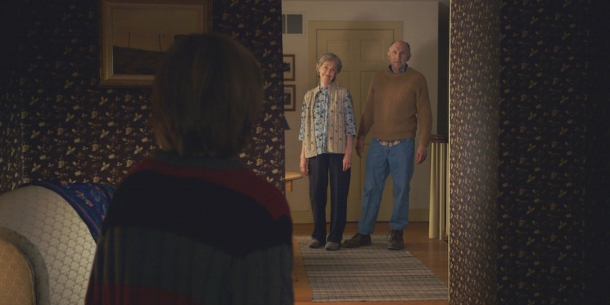 A single mother, Paula Jamison (Kathryn Hahn), needs a nice getaway with her latest boyfriend – her husband having run out awhile ago. So she sends both her kids Rebecca (Olivia DeJonge) and Tyler (Ed Oxenbould) out to the quaint little town where she grew up in order to spend some quality time with their grandparents, Doris and John Jamison (Deanna Dunagan/Peter McRobbie).
When the kids arrive, everything is grand. The first time they’ve met their grandparents, both Rebecca and Tyler find it interesting getting to know them. Even better, Rebecca is making a documentary film about her mother, her hometown, her life, et cetera, and so meeting the grandparents provides Rebecca with more information.
A day or two in, though, the kids start to feel as if something is not quite right. First, Tyler comes across a pile of dirty diapers in the shed – where he was warned not to look. Grandma explains it away by telling the young boy his grandfather sometimes has ‘accidents’, and so he cleans it up in private, stowing the diapers in the shed until he can burn them. Sort of a sad thing. After that Tyler walks away feeling sorry for his grandfather. However, once dear ole grandma is discovered naked in the dark hallway outside the kids’ room, savagely clawing at the walls, Rebecca and Tyler start to investigate what’s really been going on around the old house. While Rebecca seems naive enough to believe her grandfather’s explanation of sundowning, the younger Tyler tries to make her see something sinister is beginning to happen with their grandparents.

Going into this I was sceptical, only because I wasn’t sure why Shyamalan, a guy with a definitive, distinctive style of his own as a filmmaker, would choose to go with the found footage sub-genre. Then a little ways into the movie, I found myself caring less and less about why and focusing more on how it worked for the film.
There’s a moment a little while after the kids arrive at their grandparents’ place, when Rebecca and Tyler are playing hide and seek. They go out under the porch outside, the big deck, and crawl through underneath. After a minute, out of nowhere, grandma Doris appears behind them, very eerily, and becomes part of the game. She chases them outside, gets up and brushes the dirt off her knees, straightening up. Then Doris laughs and tells them there are treats baked inside. Such an odd and unsettling moment, I knew there was something not at all right with grandma at this point.
Most of all, I liked how the found footage was used in scenes like these. There weren’t many of the jump scare type shots, but definitely a few of these spooky moments where the style of camerawork absolutely lent itself to making things feel off-balance. Plus, I really enjoyed the two young actors and how they incorporated the camera into their lives/the trip. Especially Olivia DeJonge – I thought the bits where she interviewed her grandparents were key in making the plot come out, tiny bits slipping in through those scenes, and DeJonge does great with her part holding her own with the older Deanna Dunagan and Peter McRobbie (who are both fucking fantastic here and part of why the movie works so well). 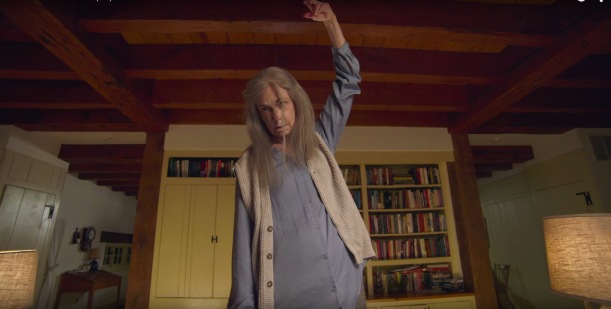 Again, though, the best part of The Visit for me is the screenplay. I found the writing really tight and the characters were excellent. The two young actors matched the acting talent of the older actors perfectly, there were no moments I found myself taken out of the film by the acting, which is often a drawback of the found footage sub-genre (too much worry about camerawork and a meandering plot and not enough attention to character or acting). Particularly in low budget movies, the acting isn’t always solid, at all. Here, Shyamalan has all the right people in place for the characters needed.
On top of that, his script just keeps you guessing. People always want to say they knew what would happen, this or that. But to be truthful, I thought this was going to be a supernatural or possibly alien type movie. I figured grandma and grandpa were maybe harvesting little baby aliens, or who knows what the fuck else, I don’t know. Did not see this ending coming. When it finally hit, everything said and done – the twist played out – and the music plays (which is worked in perfectly at the end harkening back to an earlier moment), it was glorious! Really fun ending. Not the typical found footage horror style finish, and still it worked. The writing subverted my expectations throughout the entire film, so kudos to Shyamalan. I was constantly trying to figure out what might happen. Instead, this one took me along for a heavy ride and I lapped up every second.

This is one of the better found footage horror movies I’ve seen in awhile. Not only that, M. Night Shyamalan gets his groove back here with a movie that contains good writing, solid scares, and a bunch of great central performances out of the four main characters. 4.5 out of 5 star film, for me anyways. I know others have said completely the opposite, that it’s formulaic, or that it’s this, that, the other thing. Agree to disagree. Some of the most fun I’ve had in the theatre when it comes to horror movies over the past couple years. It was frightening yet exciting and there was a ton of mystery to boot, which kept me glued. Check this out as soon as you can if it’s still playing in your local theatre, worth seeing this proper rather than wait for Blu ray, DVD or VOD. Can’t wait to see what Shyamalan will cook up next.