After the terrifying ending of “First Time Again,” The Walking Dead‘s 6th season moves into its second episode with a devastating bang. Enid (Katelyn Nacon) wound up alone wandering the roads after her mom and dad were eaten by walkers.
She continually writes JSS in the dirt on the ground and in dusty car windows, as if reminding herself of a mantra. Pretty gnarly scene when she finds a tortoise crossing the road— smash cut to her ripping it open, feeding on its bloody corpse like a walker would a human. Then, once more, she puts the leftover bones on the ground in front of her, spelling out JSS. Finally coming upon the suburb of Alexandria, she hesitates approaching the gates, writing JSS once more on the dirt all over the back of her hand. Inside she can hear normal voices, like people are actually living their lives.
One of Father Gore’s favourite openings to any episode in the series. 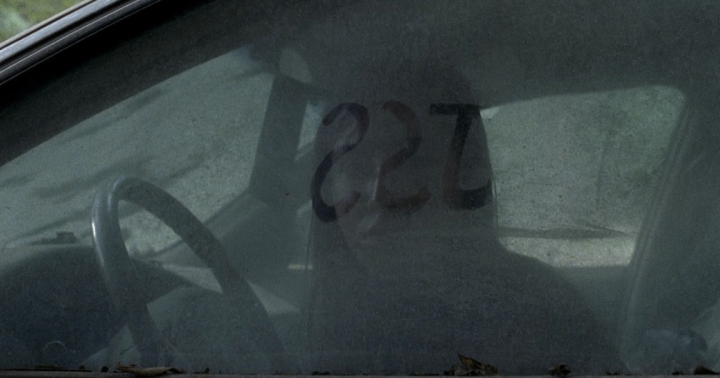 Back to present day, Carol (Melissa McBride) is doing more of her cooking. She talks about her old life: Ed, her “spring cleaning casserole.” Love her character. What a woman in every sense of the word— tough, caring, motherly, unflappable. She offers a sense of stability, especially to other women in the neighbourhood. She tells them they’re going to learn how to make pasta by hand. Everything she does, even her tough love side, comes from a caring place. Jessie (Alexandra Breckenridge) is trying best she can to keep her home in one piece after the death of her husband. Things with her son Ron (Austin Abrams) aren’t going so well.

Deanna (Tovah Feldshuh) is also having a rough go of things. Her partner is gone now, things have slightly shifted in beloved Alexandria, so no wonder. Maggie (Lauren Cohan) lends a comforting shoulder, telling her the people in their town were there because of her. Maggie’s another badass female character who is well-rounded: strong, vulnerable at times, caring, and tough as hell.
And now panic strikes as an attack comes down on Alexandria!

Carol watches as the woman she told not to smoke gets machete’d while smoking on her front lawn. Then, Deanna and Maggie watch Molotov cocktails start to fly, a person on their wall getting burned to death. Absolute and utter chaos has struck.
Are these the Wolves? You bet your ass.
Everyone’s on high alert. Carol goes to start defending the neighbourhood, as Carl (Chandler Riggs) and Enid lock down the house with little Judith. All the while, people are hacked to bits and stabbed to death outside. The Wolves mark Ws on peoples’ foreheads in blood, as well as their own. Complete madness. 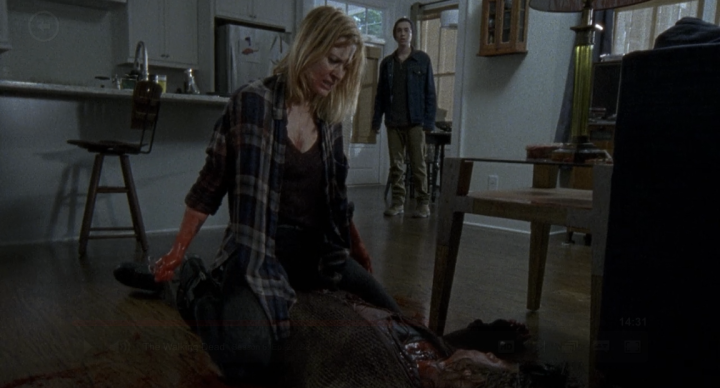 The horn which leads all the walkers back from the quarry and away from where Rick (Andrew Lincoln) and Co. were funnelling them starts to sound after a transport truck flies into Alexandria’s wall. Morgan (Lennie James) shows up back in town, confronting a big Wolf (Lance Tafelski). Carol flies in disguised and stabs the man. Great scene! Continually amazed by Carol. A survivor from the start. Dressed as one of the Wolves, she goes on to do some major killing. Goddamn ass kicker. Meanwhile, Morgan keeps insisting: “You don‘t have to kill people.” A bit ridiculous at the moment, really.
Jessie gets her chance to protect her family when a female Wolf breaks inside their home. An incredibly savage stabbing, which her son Ron walks in on. Even amongst so much bloodshed, it’s a tense and wild scene.
Also, Carol sees another red A marked on a house. Again that letter turning up.

Morgan has a confrontation with several Wolves, one of which he met a while back in the woods and spared. The few Wolves leave and Morgan shuts the gate to Alexandria. He keeps trying to convince himself killing isn’t necessary, when all the violence around him says different. He has another encounter briefly with a Wolf inside the house— another familiar face. Aaron (Ross Marquand) finds his satchel while stabbing the dead in the street, to prevent more walkers. Inside are the photos he lost a while back. 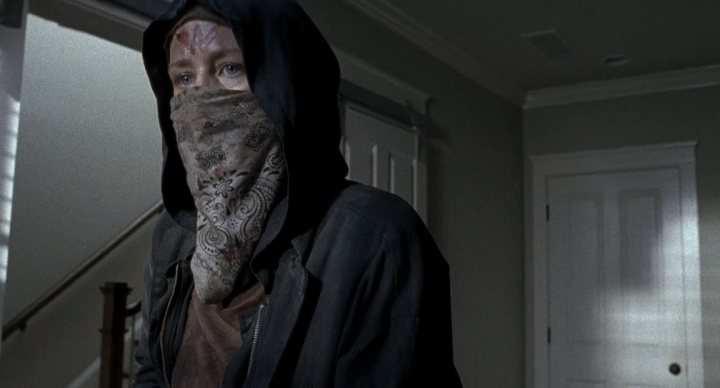 Easily one of the bloodiest sequences in The Walking Dead‘s entire history. People in Alexandria aren’t used to this sort of action, not in the way Maggie, Rick, Carol, and Morgan have become hardened. Hell, Carl’s turning into a true bad ass. Interesting to see how the different pockets within the major group are reacting. Makes for good writing, and a nice contrast as opposed to the good vs. evil we had happening most of the time between Rick/his group and The Governor/his group.

“Thank You” is next.