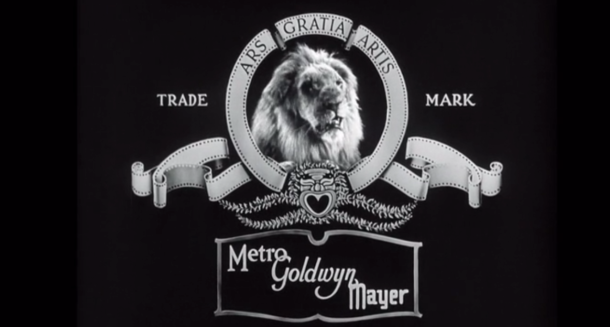 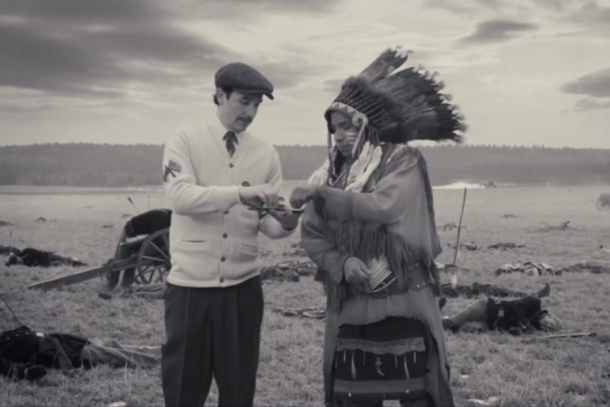 Another show I loved in its first season, I’ve decided to review Fargo going forward (I’ll retroactively go back and do Season 1 soon). All new characters – some of them, anyways. All new situations, locations, and more!
Season 2 opens with the old school MGM lion and logo. Furthermore, there’s a black-and-white clip from Massacre at Sioux Falls, and an awkward exchange between actor and director of the picture. Awesome beginning – “Look I’m a Jew, so believe me, I know tribulation.” – I was laughing so god damn hard. Plus mentions of Reagan (his nickname = Dutch), as well. Dig it, and I’m super curious where this Reagan stuff is going to head. Perhaps we’re going to see some parallels with Reaganism and crime, some kind of other similar comparison, I don’t know. Either way, the writing is pulling me in right from the start.
Now we move into an old clip of President Jimmy Carter giving a speech from the Oval Office, mixed with cuts of some new characters and even other news pieces on John Wayne Gacy and Jim Jones. There’s not only great selection of news pieces and shots of a few new characters – including those played by Kieran Culkin, Jeffrey Donova, Bokeem Woodbine and more – the editing here is downright stellar. Gives things a chaotic tone from the start.
Heading off from there, Dodd Gerhardt (Jeffrey Donovan) and his associate Hanzee Dent (Zahn McClarnon) meet in an alley with Rye Gerhardt (Kieran Culkin), putting the fear of violence in him. Rye is under the thumb of his brother meant to be collecting money. Obviously the Gerhardt clan is into nefarious shit, though, poor little Rye feels left out of the race for the throne. They’ve got another brother, Bear (Angus Sampson), but I guess Rye is the one wearing “the short pants” until he proves he’s a man and can handle the family’s business properly. Seems like the young brother might be an underachiever, in terms of organized crime.
Back at the Gerhardt house, mama Floyd (Jean Smart) alerts papa Otto (Michael Hogan) there’s a little money short at the moment. But during their talk, Otto has what looks to be a stroke, gripping the table before falling to the floor.
Out on a run for collections, Rye obviously has things going on the side. Apparently he’s going in on IBM electric typewriters with a business partner. All it involves is forgetting debt owed to Rye’s family and tailing a judge (Ann Cusack). There’s a great use of the split-screen in this episode with lots of nice cuts between Rye and his family, all doing their own thing. Over that Billy Thorpe’s “Children of the Sun” plays. Then we’re right back with Rye alone, he’s followed the judge into a diner after taking a bump of coke in his car. Slick, Rye. He slides into the table across from her. He tries convincing her to change her mind about a case, to which she reels off a big story about Satan and the Biblical Job. Bit ridiculous, but no in terms of writing – I think it shows how cocky a woman this judge is. Then she sprays bug spray in Rye’s eyes, so he blasts her away. Whoa. He kills a cook and a waitress afterwards simply out of fear and surprise. The judge isn’t all dead yet, she stabs him in the back before getting another bullet. I’ve ruined enough, so I won’t fully spoil the rest… this sequence is a rough doozy.
Safe to say there’ll be a bit of nasty trouble gearing up for the Gerhardt family?
Game changer comes quick when Rye wanders into the snow packed road looking at lights in the sky and gets smashed by it car. It only drives away with him adorning the hood like an ornament. 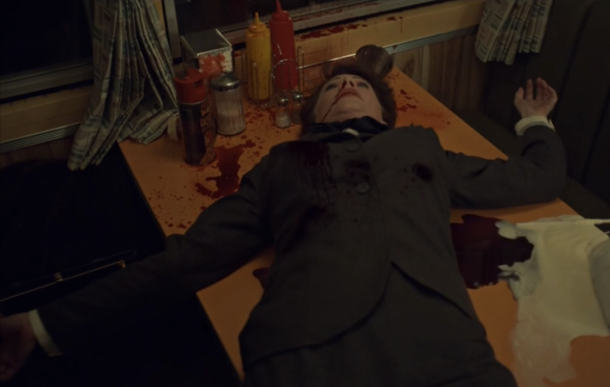 Now we’re back with a young Lou Solverson (Patrick Wilson) – previously played in Season 1 by Keith Carradine – and his wife Betsy Solverson (Cristin Milioti) tucking their child into bed. Lou gets called into work, naturally because of the shooting at the small diner. This is one of the immediate things – aside from this series’ amazing overall aesthetic – I love starting into Season 2, how we’re getting a link to the first with Solverson and this crime. Not just that, Patrick Wilson is a solid actor in my book, so it’ll be interesting to see what he does with this character.
Added to Wilson, he gets to play off Ted Danson who features as another police officer, from the state, Hank Larsson. They each do great Minnesota accents and their chemistry is actually incredible. Would never have imagined these two together. Their relationship actually, for whatever reason, reminds me of the cops from the Fargo film. Such non-chalance and oddly humorous chemistry. Lou heads down to Bingo with a couple of his buddies, including Karl Weathers (Nick Offerman). I loved this bit because Offerman is usually a certain type of character, here he’s a sort of anti-government conspiracy theorist yet not totally mad or anything just super serious really. Lou’s wife Betsy recently started chemotherapy, so it’s even worse now with this recent shooting – guaranteed he’ll be away a bit working while she’s trying to deal with her illness. Or is Lou the solid type he seems? Will he put aside work and be there as much as she needs? We’ll see, it’s a tough situation for them both, a devastating disease for Betsy to fight.
Meanwhile we’re also introduced to Ed Blomquist (Jesse Plemons) and his wife Peggy Blomquist (Kirsten Dunst) who have a fairly regular life. Ed works down at a butcher shop, bringing home some meat that was paid for but not picked up. Peggy cooks up a nice meal in their cute little kitchen, then they sit down together for a bite. Only there’s a little tension between husband and wife – babies, sex, all that stuff.
The kicker being Peggy was the one driving the car that hit Rye after his shooting. She tries to explain it away the accident by saying it was a deer. Except it might’ve worked if Rye weren’t still alive in the garage, barely, and trying to stab Ed. Luckily, Ed fends him off but ends up stabbing him to death. His wife really did him bad on this one. A nasty chain of events is about to start unfolding and I can only imagine all its repercussions. The Gerhardt family, regardless of their disappointment with Rye, are going to be pretty torn up about this when it comes to light, which obviously means Ed and Peggy Blomquist are going to find themselves in a sticky situation. In addition, the cops make this a vicious triangle. So many things that can, and no doubt will, go terribly wrong. 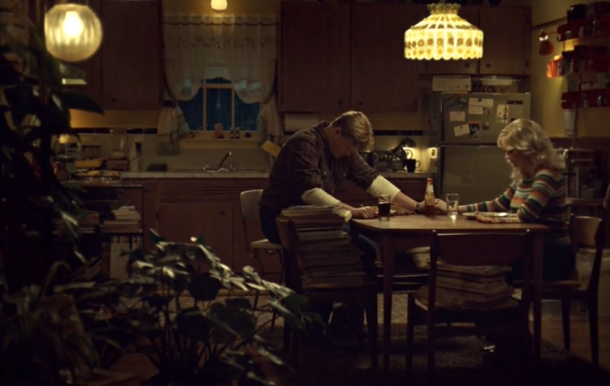 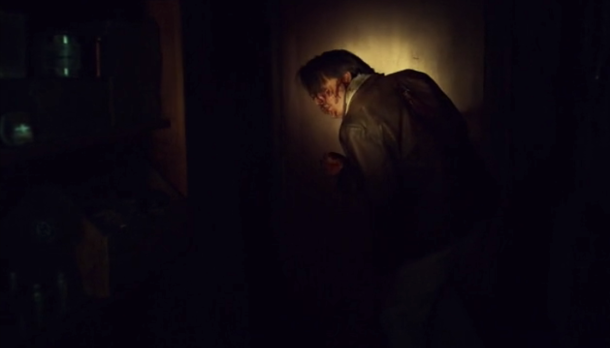 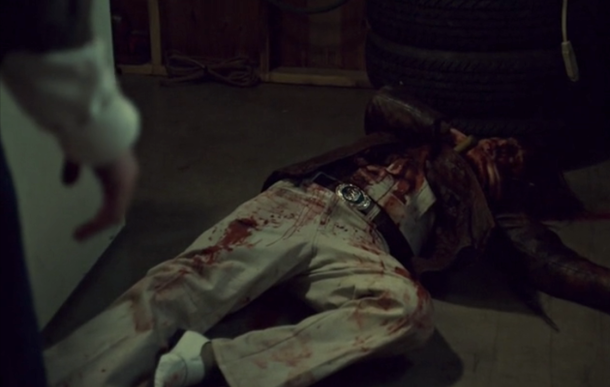 End of the episode was good with a cut from the Gerhardts all surrounding Otto, now lying quite still in bed and the sounds of when he first stroked, to a shot of Ed and Peggy tossing Rye into their deep freeze. 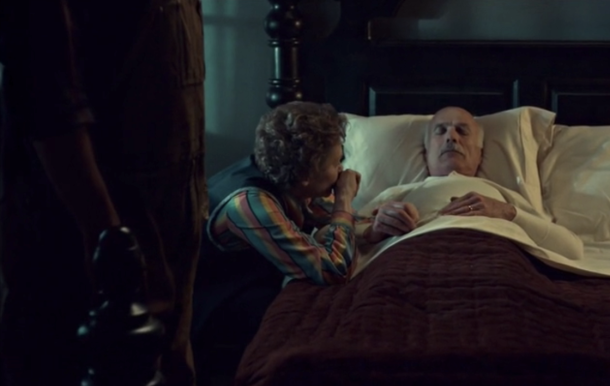 Nice quick intro to Joe Bulo (Brad Garrett) who briefs a team of people on the Gerhardt family’s business. Apparently the family is poised to be absorbed by a larger corporation. This whole thing is pretty shady and ominous in ways, love the very last couple shots and the music kicking in, solid finisher. 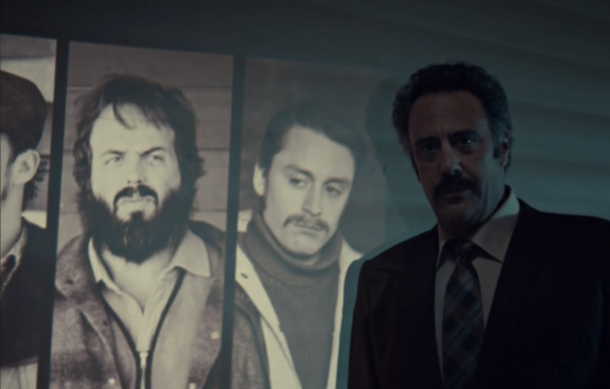 Stay tuned for the next episode with me – “Before the Law”. Loving this season already, I hope many of you are, as well!