The Halloween series gets worse after the 4th installment, even lots of people might say that was a bust. Me, I enjoyed it. Starting with this film, Halloween V: The Revenge of Michael Myers, the brutal psychopath reality of Myers himself began to be diluted. Though I love the connection between Michael and his niece Jamie, the writers tried to go too far into the supernatural aspect of Myers – he always had a sort of inhuman, or superhuman quality about him, but it was best left a mystery like in the original; he was pure evil.
With this sequel, the series starts on a long descent into obscurity. Though, I did love the remake and partly enjoyed its sequel from Rob Zombie, even if many hated it and loathe him for even touching Halloween. But as far as the original series itself goes, after this one it gets pretty bad, embarrassing almost. This movie doesn’t have full coherence at its side. That being said, I do love the suspense and tension still present in Michael’s character, his lurking and his casual sneak behind the scenes unnoticed. And it’s always nice to see Dr. Loomis, no matter how cranky a bastard he may be after all these years hunting evil.

One year following the events of Halloween IV, Michael Myers (Donald L. Shanks) has survived the shootings of the previous year’s Halloween night. Little Jamie Lloyd (Danielle Harris) has gone mute after attacking her own stepmother. She’s confined to a children’s hospital, treated for her psychological trauma. It becomes apparent to Dr. Samuel Loomis (Donald Pleasence) that Jamie is exhibiting a type of connection, a mental link with her uncle Michael. As the psychotic slasher kills his way back to try and finally kill his niece, Loomis and the other Haddonfield residents try to band together in order to safeguard the lives of those who matter most from walking evil.
But as he’s so often proved before, nothing seems a match for Michael Myers. He is the living, breathing, walking presence of death. He will have what he wants.

Michael Myers is a feral, savage beast. He coldly kills the man who looked after him once collapsing after coming out of the river. Not that I expected any less, but still – cold blooded. Starting with the previous film, Halloween IV, Michael already started to exhibit pretty harsh, violent strength. From the beginning with Carpenter he was always an unnaturally strong slasher, but in the last movie the savagery of his kills began amping up. There was already the thumb through a guy’s forehead. Here, it isn’t only the intensity of the kills themselves, there’s an even worse sense of Michael’s vicious nature coming out. He’s becoming a worse evil than ever imagined, if that’s entirely possible. So, one of the positive things I can say about this sequel is the fact Michael sort of changes, at least in a slight sense, as a horror movie slasher. Okay – it’s not huge literary character development. Could be worse, though.
Then there are some excellent little sequences full of fear. For instance, when Jamie (Harris) is running through the hospital, thinking uncle Michael is right on her tail and trying to kill her, there’s a good deal of suspense and the heart gets pumping. Of course she’s only imagining it, and the big jump comes as you almost expect Michael to be there. Instead it’s a maintenance man, a nurse behind him, each looking for Jamie. I thought that was a solid scene, subverted expectations.
Another scene I liked is when Tina (Wendy Foxworth) goes out to the car, expecting her boyfriend Mikey (Jonathan Chapin), only unbeknownst to her it’s actually Mikey Myers in the mask she bought – it was super tense, I honestly didn’t know how the scene was going to go and I constantly feared for Tina’s life, every step of the way. Really effective few moments, even tied up with Jamie and her strange psychic connection with Michael, because there are moments cutting to and from Jamie/Tina which make it all the more nervous for the audience.
On top of that, I do like the Thorn Cult people prowling around. Adds something extra. While I’m not a fan of the supernatural-ish angle happening, their presence is definitely creepy. Seeing one of them walk out after Loomis heads downstairs in the old Myers house, another passes out onto the street in another shot between the Jamie/Tina ordeal – I find it dark and foreboding. I guess the positive aspect of this, what I’m trying to get at is, that if Myers and his story has to be continued with these sequels, it’s at least interesting the writers tried to conjure up a backstory with more depth than originally intended. Not saying it’s better than just the faceless slasher, the mysterious psychopath. But if it’s got to be kept going, at least make it interesting and a little fresh.

An important aspect of this movie is the fact Danielle Harris was a great actress at such a young age. Even with the silliness of the psychic link between her character and Michael, she did a wonderful job. The fact Jamie was mute for the first half of the film made for some interesting acting, which I enjoy to the fullest. She brings across the struggling, traumatized little girl in Jamie so well. I still find Harris to be a quality actress, even a good director now, even if the films she acts in aren’t always the best. At an early age, Harris was able to prove herself and add something interesting to Halloween V in a slightly bland sequel.
Aside from Harris’ performance and the handful of creepy scenes, there’s not a whole lot else going on. The kills are decent here and that gives the movie something else to rely on. Most of the acting holds up, but it’s really Harris and Donald Pleasence – of course – who hold up that end of the bargain. If the writers hadn’t leaned into the psychic connection it may have been better: the whole cult thing was cool, it just should’ve been turned into something different other than what it later became in further sequels; I always imagined it cool if a cult began to worship Michael instead of what started to happen after this movie. I love all the Jamie-Michael stuff, but it wasn’t best served being turned into a supernatural thriller style plot device. 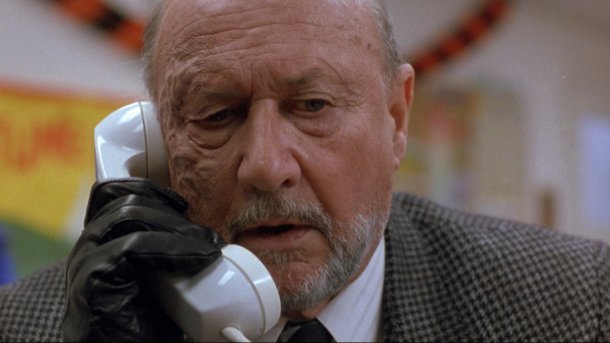 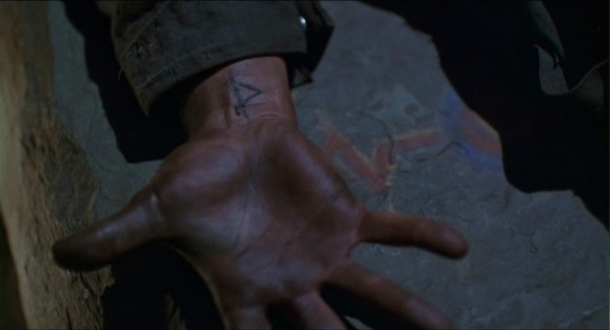 I can’t rate this Halloween installment any lower than 3.5 out of 5 stars. It is nowhere near any of the best this series has to offer. Still, though, I think there are some good moments of suspense, lots of tense scenes. Instead of jump scares this film relies on a nice performance from Danielle Harris, the return of Donald Pleasence as Dr. Loomis, as well as a slow pace. If the story were better I could’ve definitely given this a half star (or more) extra. However, the plot in this movie begins to make the series get silly and bad as the sequels push on. Either way I don’t feel this movie deserves the hate it gets, nor is it a masterpiece. It’s just a fun sequel despite its flaws.