This is an episode Father Gore’s looked forward to, unlike some— a nice long look at who Morgan Jones (Lennie James) has become, where he’s been and how he got back to Alexandria. We open with him talking to the unseen leader of the Wolves, Owen (Benedict Samuel). Then quickly it transitions from NOW to THEN. We go back to the house where Rick (Andrew Lincoln), Michonne (Danai Gurira) and Carl (Chandler Riggs) last saw Morgan before their Season 5 finale reunion.
Morgan is having a fairly animated conversation with himself. He’s pissed, ranting, raving. A fire starts and burns the place down. So out into the world he goes. A lot of people complained about this episode because it’s so Morgan-centric. Father Gore digs it. You can’t just explain away a guy going from a lunatic to zen so easily as to re-introduce him— they had to do this episode. Keen of the showrunners to do it now, too, while everyone’s dying for answers about Glenn (Steven Yeun).

Also, something many forget: Morgan saved Rick’s life, all those seasons, all those many months upon months ago. He’s an important part of the series. Why wouldn’t we get to see more about him?

For the first little bit while Morgan is out in the woods, it’s zombie effects time. A couple real nasty looking customers wander out of the trees, another right through the fire. But then we see him murder two men, who seemed to be following him. He screams at one, strangling him with bare hands: “You don‘t!”
There’s still a reasonable aspect to him, under the madness. He builds himself a protective cocoon of trees whittled into spikes. Morgan survives all alone in the wilderness. He waves a big stick around at the voices in his head. There’s some tragic stuff happening. Lennie James is someone Father Gore’s enjoyed long before now. He really does great stuff with the character of Morgan.
After a while, Morgan comes across a cabin. Refusing to put down his gun— like anyone else probably would in his situation, be honest— a man named Eastman (John Carroll Lynch) whacks Morgan a good one across the back of the head.
Thus begins the tutelage of Eastman.

The exchange between Eastman and Morgan is interesting. Eastman’s a doctor, specialising in mental health— a “forensic psychiatrist.” An intriguing perspective to see through during the zombie apocalypse. Plus, he’s so damn chill. Even with all the shit Morgan ends up giving him— starting a fight when the guy’s only trying to be a good man— Eastman continues to give him a chance. Essentially what this man provides is a way for Morgan to recognise the humanity in himself again. Much like Rick lost a lot of humanity, Morgan has gone off the deep end. Worse than Rick ever did. Morgan is a broken man. What Eastman provides is a way to start admitting that, as well as the possibility of coming back from it and living again— some way, somehow. He reveals the door to the cell is actually open, allowing Morgan to make his choice: stay or go. We also hear the “everything gets a return” line that Morgan will later repeat in Alexandria. Then Morgan decides to put himself back in the cell after he tries to fight Eastman.

Note: the book he’s given is The Art of Peace by Morihei Ueshiba.

Through the teachings of Aikido, Morgan begins to learn “all life is precious.” It’s naturally a part of the post-zombie world to begin feeling as if life means nothing. So many of the survivors still on the show and living have fallen into the despair of this line of thinking. Morgan just happens to be the epitome of that feeling. He starts to see what life is once more, after he notices Eastman buries all the zombies he kills in a makeshift graveyard. Because once they accept that people aren’t people any more, it’s only that much easier to start believing the living are just dead people walking, even oneself.

It’s the story Eastman tells Morgan about his family which really breaks the heart. Morgan truly switches his mindset here. He sees how vicious the world was even before and remembers it’s human beings who are the worst of all, not even the zombies. It is us. And maybe he does not want to be that us anymore. This scene between Eastman and Morgan at the dinner table, the low light, the soft spoken dialogue, it’s one of the greatest scenes on The Walking Dead out of its entire run. So much going on within this scene and the situation between these two, a great bit of writing.

Very sad to see Eastman take a bite, stepping in to try and help Morgan after he begins to trip out while a zombie shambles towards him— the same man he strangled to death previously. They fight with their respective staffs. Morgan isn’t fully in the zen zone as of yet. After he falls in their scuffle he once more begs Eastman: “Kill me— kill me!” Even after the bite, Eastman keeps his zen perspective. Morgan heads back over the edge a bit. The big guy sticks to his Aikido and doesn’t seem to be worried much about his current predicament. It’s through this event Morgan finally comes back around. He runs off, briefly encountering a couple, one of them wounded, and doesn’t kill them. He rushes back to his teacher. Eastman reveals he starved the man to death who killed his family— it didn’t give him “any peace,” so he vowed never to kill anything again.
And the rabbit’s foot we saw in a previous episode? It belonged to Eastman. 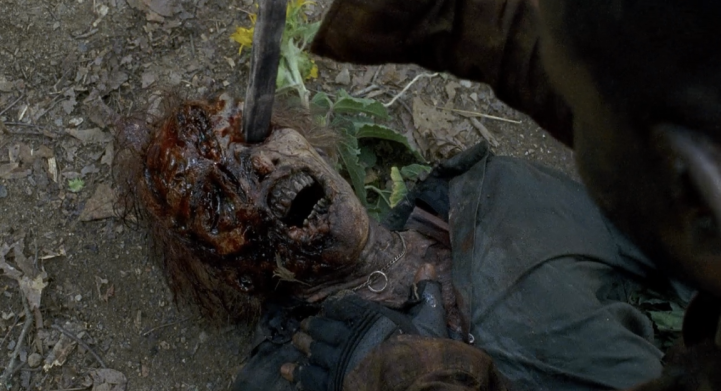 The episode closes with Morgan again talking to the leader of the Wolves, who has a fairly nasty, infected wound. He believes he’ll die. If not, he plans on killing Morgan and everyone in Alexandria, even the children. Will Morgan continue with the all life is precious mantra? He already let this guy live once and look what happened.

Very much excited to see the next episode, “Now.”