Deanna (Tovah Feldshuh) goes to the place where her husband Reg put up the first panel of Alexandria’s wall. After reminiscing shortly, she looks out towards the road where the walkers are shambling towards their safe haven. Rick Grimes (Andrew Lincoln) comes barreling through, screaming for the gates to open. One of the more intense slow motion scenes on The Walking Dead. Even worse, Deanna looks as if the entire world has collapsed around her. In a sense, it has, and it’s happening right now.

Rick lines everyone up, reassuring them to keep morale high. They’ll band together, seal Alexandria up and make it safe. Will the people of Alexandria step up? Aaron (Ross Marquand) puts his hat in the ring for Rick and speaks highly of Daryl (Norman Reedus). He admits to, essentially, not knowing as much as Rick, Daryl and their entire group, and that he lost those photographs the Wolves found.
Still, Deanna appears to have gone over the edge. 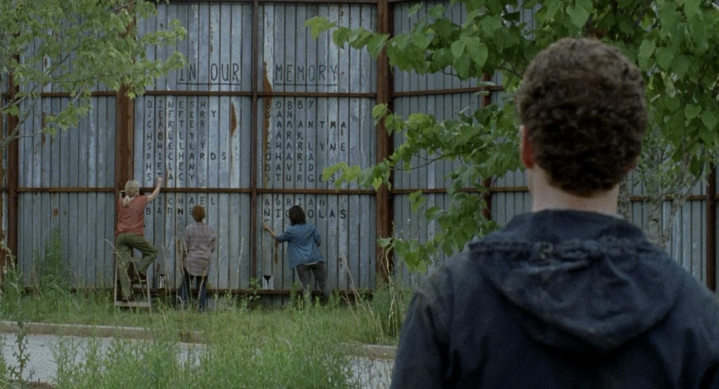 Jessie (Alexandra Breckenridge) cleans her house. There’s a pile of dead Wolves out in the yard she plans to bury. Rick shows up and tells her: “We don‘t bury killers inside these walls.” Olivia (Ann Mahoney) has troubles with everyone over at the food dispensary. All the residents say fuck it, taking what they will. Spencer (Austin Nichols) lays down the law and tells them going down that sort of path will make them the type of people they don’t want to become.
Father Gore really feels for Aaron. The fact those pictures ended up in the hands of the Wolves is such a tragic accident. You can see how horribly it hurts him to have inadvertently played a part in The Wolves’ assault on Alexandria. Maybe redemption’s coming for him. He and Maggie (Lauren Cohan) head out together in search of Glenn (Steven Yeun), whose fate is still not set in stone.

At home, Deanna scribbles away at a big map, noting places for alfalfa, barley, all sorts of crops, and buildings for education, et cetera. She jots down an Ovid quote: “dolor hic tibi proderit olim” (Be patient and tough— someday this pain will be useful to you). She doesn’t want her husband’s death to be in vain. Afterwards, she and drunk Spencer have a clash. They’ve got all sorts of rations over at their place she didn’t know about, and Spencer only did what he did earlier to make it appear proper. What a snake.
Carl (Chandler Riggs) is hoping to find Enid (Katleyn Nacon). He has a bit of a showdown with Ron (Austin Abrams). He knows his shit, while Jesse’s son is a dummy who knows nothing only that danger exists out there. Unlike Carl, he’s never had to shoot his mother, who just gave birth to his sister, right in the head. 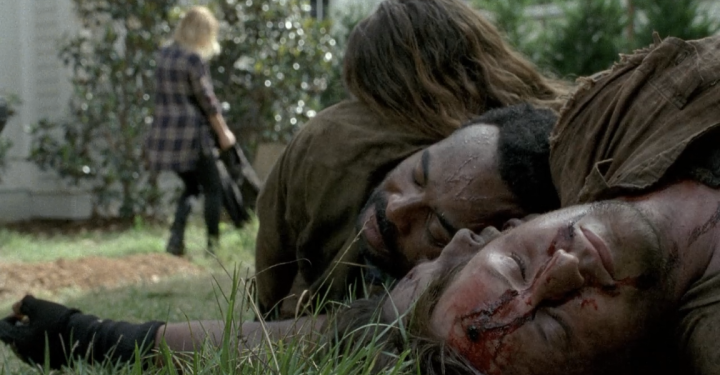 “You wanted to dream”

A very sad yet empowering scene at the same time comes when Jessie finds a neighbour zombified. The woman slit her wrists, trying to escape the zombie apocalypse. But of course she comes back. So it’s a depressing zombie moment, yet Jessie proclaims, after putting the lady zombie down for good: “This is what life looks like now— we have to see it, we have to fight.” Excellent moment. Not only gives Jessie more power, she impresses the others. Namely Dr. Denise Cloyd (Merritt Wever), who’s been wavering a little, such as in an earlier scene with Tara (Alanna Masterson). A look runs across Denise’s face that speaks volumes.
Back to Aaron and Maggie, making their way out of Alexandria on their quest to track down lost Glenn. AMAZING ZOMBIE EFFECTS! In a sewer, they run into a couple soggy living dead specimens. Such perfect makeup, love the practical work here. Even further, Maggie and Aaron have a nice dynamic going already. Excited for more of them— they’re both damn tough.

Ron goes to Rick and tells him about Enid sneaking out alone. What a little shithead. He’s not doing this for any other reason than to stir things up. Rick starts teaching him how to shoot, too. Father Gore doesn’t like where this kid and his attitude are heading.
Surprise! Dr. Cloyd gives Tara a big smooch for helping out with a patient, giving her the confidence to keep going and push through the fear.

We finally get confirmation from Maggie: she’s pregnant. At the last moment, she stops Aaron from opening the grate to head out into the wilderness outside Alexandria. Passionate speech from Maggie. This entire scene is so intense. Maggie doesn’t have much, if any, hope left at all. She’s seen too many people die, especially her own family. She and Aaron embrace, they’ve got a bond. He’s going to be a good friend to her from now, watching out, helping where he can. He is a good man who wants to do right by others. Again, their chemistry’s awesome. 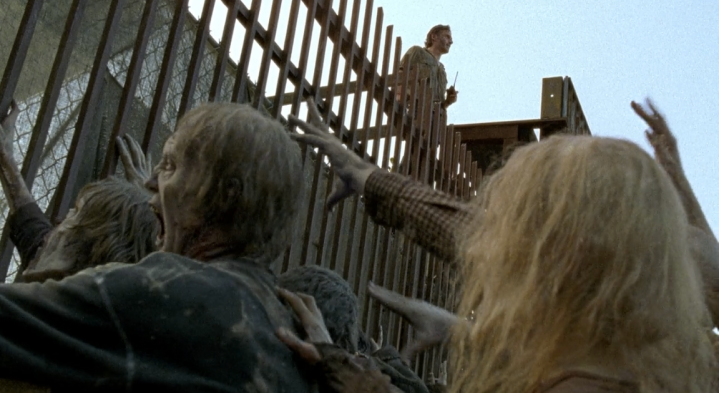 Deanna stumbles through the streets, hearing voices of the past. Out from under one of the houses comes a Wolf zombie, one Carol (Melissa McBride) couldn’t find after she killed him in the attack. Deanna GOES TO TOWN on the zombie with a broken bottle, stabbing it repeatedly in the chest. Finally, Rick rushes out of the darkness to kill it off. She looks at him dead in the eye and says: “I want to live.” So this episode has really been a turning point. Seeing Rick and his group go through traumatic events alongside them, the Alexandrians have hit a corner. They’re coming to discover they do have what it takes to survive.

Father Gore’s favourite scene comes when Maggie hops down off the wall with Aaron. They go to the panel where all the IN MEMORIAL names have been marked— of which Glenn is one, as is Nicholas. Maggie wipes his name off. She does have hope. 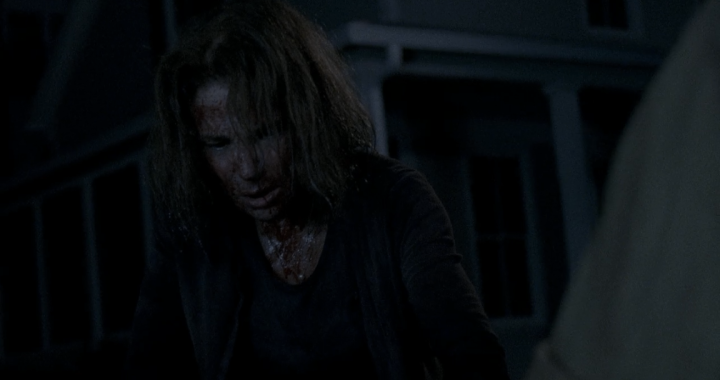 The finale sees Deanna getting her groove back, as well as Rick and Jessie getting closer. A final drip of blood running through a hole in the wall closes things off.

“Always Accountable” is next.