Finally we’ve made it to “Heads Up”— where hopefully things unresolved start to come together, such as where is Glenn (Steven Yeun), and what about Enid (Katelyn Nacon)?
Starting off, we hear “Thank you.” The episode begins as Glenn slides under the dumpster he fell off. Meanwhile, Nicholas (Michael Traynor) is eaten alive by zombies. Watching Glenn struggle underneath the dumpster, seeing the dead eyes of Nicholas staring back at him, undead arms clawing to get at his flesh, it’s very intense.
But once the smoke clears, so to speak, we get to rejoice a little.

Sure, you can worry about Glenn. For now, Father Gore’s happy to enjoy this brief moment. Enid shows up to toss a bottle of water down to him. She doesn’t seem so interested in going back to Alexandria. Judging by the empty cans and wrappers on the floor where she’s staying, she’s camped out here more than once. Poor Glenn doesn’t know what’s going on back in their little suburb. He isn’t even totally concerned with himself after nearly dying. He chases after Enid when she takes off, unwilling to let her stay out there by herself. Yet there’s only so much he can do. 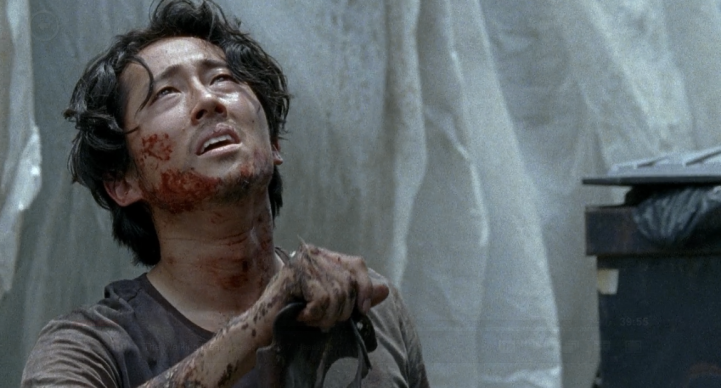 “What happened is what always happens:
people died.” 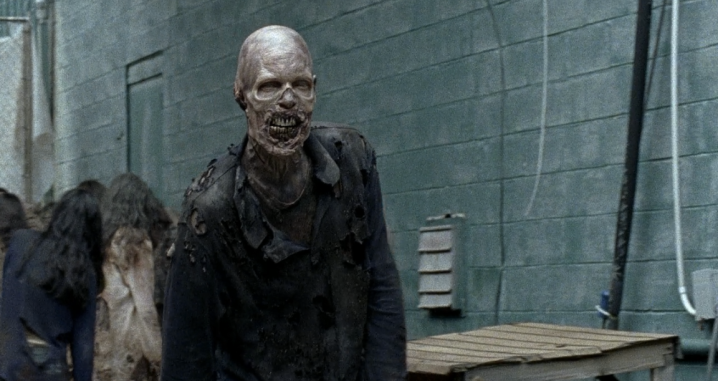 At Alexandria, Rick (Andrew Lincoln) walks the wall. Morgan (Lennie James) does Aikido, looking uneasy when Rick says they need to talk. Maggie (Lauren Cohan) isn’t giving up the faith. Rick talks with her, to make her feel a little better in the meantime. They even talk about Judith and how she looks like Lori. Touching moment.
In the wasteland, Glenn finds the note to Betsy lost in the struggle. Such a heartbreaking thing to watch him come across, resonating with his and Maggie’s relationship.

Rick continues teaching Ron (Austin Abrams) how to handle himself. Carl (Chandler Riggs) gives Ron the business while watching on. While it may seem snotty, Carl knows how to handle himself. He’s proven that, time and time again. There’s something about Ron. Father Gore feels as if he might do something to Carl or Rick, in an attempt to avenge his father. There’s a shaky sense to how Ron talks / acts with the Grimes family.

Morgan and Rick finally sit for a chat. They talk about the Wolves, and how Morgan wouldn’t kill any of them, which nearly got Rick killed later. Carol (Melissa McBride) and Michonne (Danai Gurira) are at the table, too. They all want to know what’s happening. Morgan keeps believing “all life is precious” and “people can change“. Problem is, the world isn’t like it was once. We’ll see what happens re: Morgan’s long-term status in Alexandria. He does make a good point, that Rick never killed him back in King County, even after he tried to hurt him.

Deanna (Tovah Feldshuh) is optimistic there’ll be an Alexandria, after everything. She brings her new plans to Rick. He doesn’t quite share the enthusiasm. He’s happy to see Deanna snapped out of her rut, though. Rosita (Christian Serratos) is teaching the residents how to properly handle a machete, even Eugene (Josh McDermitt). At least for the moment, even if it’s the briefest, tiniest respite from a constant world of struggle, nobody is dying, nobody is attacking, and things are at a standstill.
Nevertheless, people will always have problems. Even during the zombie apocalypse.

While Glenn tries to get Enid to go back to Alexandria, she ends up pulling a gun on him. Quickly, he disarms her: “You point a gun at me and I’m the asshole?” They end up as a reluctant team on the road. It’s actually kind of comical, like an odd couple situation. It’s understandable why Enid is so withdrawn— the way she arrived at Alexandria, what happened to her before, as a young person especially, must be devastating. If there were ever anyone to be stuck with, it’s Glenn Rhee. He has a way of talking to people, no matter who they are, that gets through the bullshit.

Rick’s busy beefing up sections of the wall, and out of nowhere Tobin (Jason Douglas) starts to help. Feels like a community starting to come together. Too bad it took a lot of blood and guts to get there. Regardless, Father Gore likes seeing Rick meshing with Tobin, who talks about how scary Rick was when they first saw him— the beard and the look in his eyes. Tobin relays the message clearly: “Don’t give up on us.”
Troubling development: dickhead Ron sneaked into the armory room, got himself bullets for the gun Rick gave him. Uh oh. 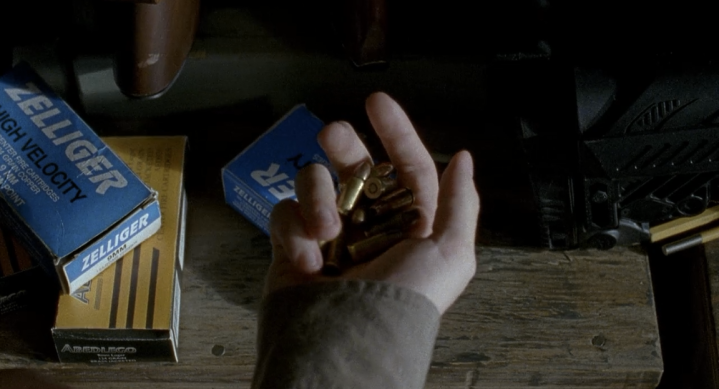 Watching Glenn and Enid come upon Alexandria is a great scene. There’s a huge shot of all the walkers shambling around just outside the walls of Alexandria. It’s a gut punch, compounded by how hopeless Enid feels. Again, Glenn to the rescue.
Inside, Spencer (Austin Nichols) is acting crazy. He’s got a backpack and a gun. Then he’s shimmying across a grappling line over the wall. Rick and a few hands are trying to save him, putting others in danger. The minute you start feeling Alexandria has learned its lessons, one idiot starts proving you wrong. Turns out Spencer wanted to get out and find a car and draw the walkers away. What a dummy.

Morgan’s lurking around the local doctor. He needs to “dress a wound,” but as he reveals: “It’s not my wound.” Carol catches Dr. Denise (Merritt Wever) walking behind Morgan. We know where they’re going. Will this cause fallout among Rick and Morgan/Morgan and everybody else? Carol’s primed to figure it all out.

“The world is trying to die.” 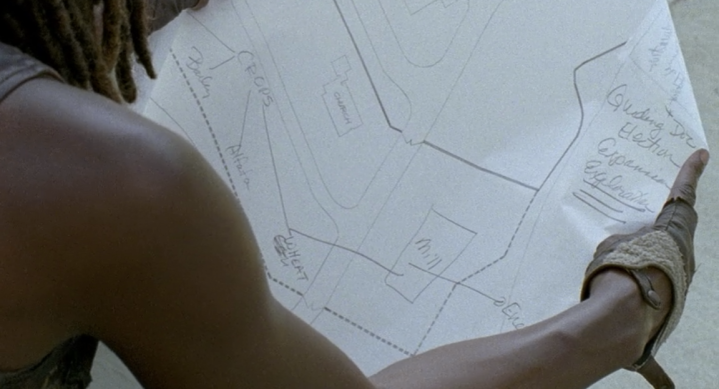 Out beyond the walls, a cluster of green balloons goes up into the air. Maggie knows in her heart it’s Glenn. Before Ron can sneak up on Carl with a gun, before Maggie and Rick can be happy about the possibility of Glenn’s survival, the rickety tower just outside the wall crashes down against it, right where Rick and Tobin were reinforcing it. Fuck.

“Start to Finish” is next.