AMC’s The Walking Dead
Season 1, Episode 3: “Tell It to the Frogs”
Directed by Gwyneth Horder-Payton
Written by Frank Darabont/Charles H. Eglee/Jack LoGiudice; Based on the comics by Charlie Adlard, Robert Kirkman & Tony Moore.

This episode starts with Merle Dixon (Michael Rooker) alone, going crazy on the rooftop where he was accidentally left. Handcuffed. Talking to himself. It’s fitting for a racist piece of shit, but at the same time terrifying. Putting myself in his place I imagine going insane would look pretty correct. Out of nowhere, it’s as if the reality of his situation sets in. Merle becomes savage trying to tear the pipe he’s cuffed to from its moorings. Worse yet, the undead are pushing through the door at the rooftop. The chains put in place by T-Dog (Irone Singleton) are barely holding, and Merle hasn’t much faith left in him. Only enough to give God one last prayer, hoping something, anything may come to his aid; that is before cursing God out, saying he won’t start begging now.

The others – Rick Grimes (Andrew Lincoln), Glenn Rhee (Steven Yeun), Andrea Harrison (Laurie Holden) and more – are headed back towards camp where Lori Grimes (Sarah Wayne Callies), her son Carl (Chandler Riggs) and stand-in-dad Shane Walsh (Jon Bernthal), as well as Dale Hovarth (Jeffrey DeMunn), are all waiting for their friends to return. Everything seems like a family, as Shane talks about catching frogs with Carl, exchanging cutesy little moments with Lori. Then in the distance, the car alarm from Glenn’s vehicle. They’re headed home.
When Lori and Carl see Rick return, it’s an emotionally charged scene. They are finally reunited after a long trip, after Rick essentially came back from the dead. Even better is the fact nobody knew Lori was Rick’s husband, so the surprise is wild all around.
We also start understanding the deep relationship between Andrea and her sister Amy (Emma Bell). That’s an important one in the first little while here during Season 1, I like that we instantly sense their connection, even before as Amy worried where Andrea was near constantly. Later on, around the fire Rick talks to everybody about his experience, and we start to gain a sense of the whole group, what sort of people they are, if only for brief moments.
With everything stirred up, we come to understand Merle has a brother named Daryl Dixon (Norman Reedus). People are worried what may happen after he learns what happened to Merle, being left behind and all. T-Dog clearly feels bad and wants to take responsibility for what went down. “That‘s on us,” he tells the group. And it’s true. They all had a hand in it, so to speak.
A tender scene sees Lori and Rick back together sexually. Although, the weight of everything else wears her down. She hasn’t told Rick about anything that happened. Outside, on watch, is Shane. And he is certainly wounded, too. Even if he doesn’t deserve to be, still, there is a lot of trouble here. Just wait for it to break out.
In the morning Rick figures out who everyone is, such as the kindly Carol Peletier (Melissa McBride) and others. And suddenly, Carl is yelling. A walker is nearby eating a dead deer. Rick and the rest beat the zombie down and kill it, as everybody else watches on. Dale gets the last swift chop to the head. After that, they talk about how they rarely get walkers so far up the mountain, and determine food is getting more scarce in the city.
Then up shows Daryl. He’s the one who shot the deer, but the zombie finished that fun. He’s an exciting character right off the bat, lots of life in him immediately. He’s a hunter, a tough guy. Plus, he tracked down some squirrels for dinner. Except when he comes to wonder about Merle the situation takes a turn. Except Rick wants to help, he agrees to go back to Atlanta with Daryl. Lori isn’t thrilled, but even more than that Shane has a problem: because he’s jealous and he doesn’t want to see Rick walk away after coming back. In a dangerous world, there’s no guarantee of coming back. Immediately we see Shane and Rick start butting heads slightly, with the former worried about putting lives at risk. Nothing will change the Sheriff’s mind. He wants to go back for Merle, as well as the bag full of guns he dropped on the street.

Sneaking back into the city, Andrea and the women stay behind. They each talk about what they miss: “I miss my vibrator,” says Andrea after they all list regular everyday items of which they’re fond. Only Carol’s husband Ed (Adam Minarovich) comes around acting like an emotionally, physically abuse husband often will. In other news, Shane and Lori are having issues, as she blames him for believing Rick was dead. I guess you could say, what else would Shane do in that situation? But there’s no reason for Shane to swoop in on the man’s wife after the fact. Either way, he straight up told Lori that Rick died. He didn’t know that, only his assumption. So I don’t see how anyone can feel on Shane’s side.
Ed continues to loom over the women. Andrea has no time for any of that and gets in his face, which draws a bit of mouth and dirty looks from Ed. He calls Andrea a “college educated cooze“. What a classy piece of work. He orders Carol around like a piece of meat before smacking her across the face. This prompts a pent up Shane to go primitive on him, beating Ed to a pulp in front of the women by the lake. Looks like Ed is about to be laid up a good long while. He deserved a beating. Yet even Shane and Carol both are a bit taken aback after the one-sided fight is finished.
The finale of the episode sees Merle’s hand found cut off on the top of the building, hacksaw next to it. Daryl is obviously upset, as the others look on in horror. 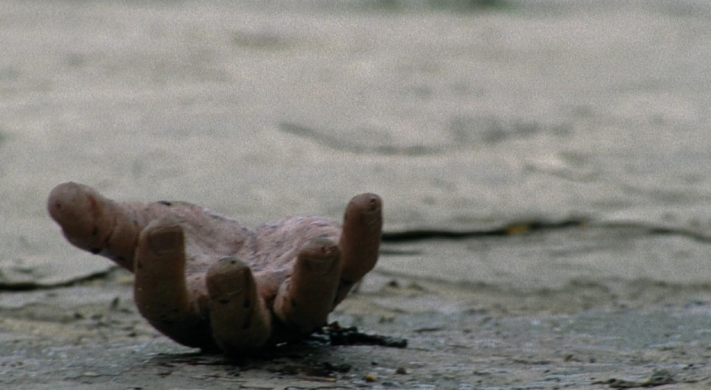 What will “Vatos” bring next?