Beginning at the farm, the seventh episode of The Walking Dead‘s Season 2 gets underway.
Tensions are high. For Glenn (Steven Yeun) there’s the new tension with Maggie (Lauren Cohan), after he spilled the beans about the barn to Dale (Jeffrey DeMunn). Even more than that, Glenn decides he has to tell the whole group. When Daryl (Norman Reedus), Rick (Andrew Lincoln), Shane (Jon Bernthal) and the rest hear about it, trouble begins.
Instead of going to Hershel (Scott Wilson) they head down to the barn. Inside, naturally, they find a bunch of walkers. Shane wants to leave and get away from the danger. Carol (Melissa McBride) doesn’t want to leave on account of her little girl, neither does Daryl. Rick doesn’t want to leave, but only Dale and Glenn know his motives. An infight is brewing, with Shane already questioning Rick’s leadership before now.
Who will win out? They have to tell Hershel. If not bigger trouble is on the horizon. 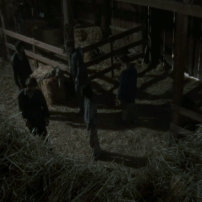 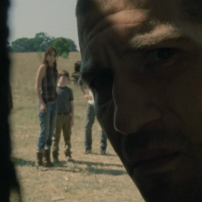 Glenn tries talking with Maggie. She’s pissed and does not want to talk much. Their newly founded relationship is on the rocks for now. In other news, Carl (Chandler Riggs) is asking if Sophia’s dead and Lori (Sarah Wayne Callies) tries her best to keep his spirits up. For his part Carl says “I‘m not leaving until we find Sophia“, and in general he doesn’t want to leave the farm. His mother isn’t sure how to exactly react. She knows they may not be there much longer.
Daryl’s busy trying to get back out on the road to do more searching, even though he needs to rest up his injury. He and Carol draw closer, though, not in a romantic way. They’re very friendly and are becoming even more so, but it isn’t a sexual relationship. They have a strong friendship budding. Talking together, he misunderstands her concern and calls her a “stupid bitch” momentarily sidetracking their bonding.
Andrea (Laurie Holden) plans on heading out to look for Sophia. She and Dale are still having their own friendship issues. He’s concerned about her and the semi-relationship she has with Shane; he knows more about the man than anyone else right now. “Is that how you wanna be – like him?” asks Dale. Andrea thinks she knows the guy, but Shane is a bad, bad dude. After their conversation Dale seems to be planning something with the bag of guns in the R.V., but what exactly? 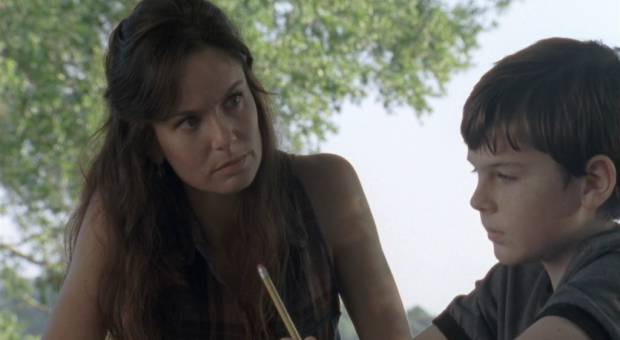 At Hershel’s dinner table, Rick comes to have a chat. The older man is a tough, solid man, and also stubborn. Rick tells him about their discovery of the barn. Except it doesn’t lead to much productive talk: “I need you and your group gone by the end of the week,” Hershel says. They have more talk of walkers, what they are, what they were and what they’ve become now. Sheriff Rick tries leveling with Hershel about how the farm is sheltered and hasn’t seen exactly what the world has turned into beyond its grassy fields.
However, the turning point comes when Rick drops the bomb of Lori’s pregnancy on Hershel. Their little rendezvous ends on intense, angry terms.
Wilder still, Rick reveals the pregnancy to Shane whose reaction nearly drops his face to the ground. He congratulates Rick, but there’s something else there, something behind the facade. Has Rick ever considered Shane could be the father? I can guarantee Shane is thinking it right now.
In the kitchen, Maggie doesn’t look very happy about her father deciding to cast Rick, Glenn, Lori and all the others out in the road. He tries to tell Maggie the group will be fine. Although, she warns him things aren’t as he sees them. She is beginning to see all that herself. 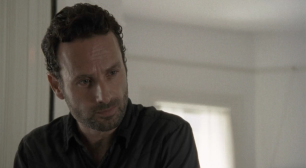 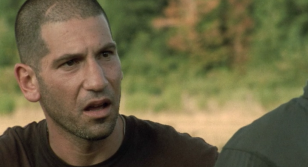 A confrontation between Lori and Shane sees more of his animosity. He questions how fit Rick is for this new world. How many times he’s saved her life, Carl’s life. Shane seems to be intent on having a life with her, one way or another. Is he going to eventually try and kill Rick, like the moment he had his gun sighted on him? Shane ends up talking to Carl, too. Agreeing they need to stay and such. But the darkness under Shane is always there, ever present. He’s willing to do whatever they need to in order to keep Lori safe. He is turning coat now because of that, only that. And if he’s got to take charge of the place himself, I believe that’s exactly what Shane will do.
He ends up back at the R.V. looking for the guns. They’re gone. With Dale, we assume. Shane heads out to look for him, veins popping out of him everywhere.
Hershel takes Rick out into the woods to show him something. Down by a little pond, two zombies are stuck in the water. Hershel wants to turn back time, to cure the sick. He has a couple rods for grabbing animals, likely from his vet work. He tells Rick this is how it is if they’re to stay on the farm: no more killing.
Glenn and Maggie finally have a real talk. He tells her “secrets get you killed” and hammers home the point that he cares for her, as well as his people. He’d rather her be alive and hating him. But that’s not the case. She does have feelings, they both do. Seeing them both come together is a beautiful thing I hope will last. 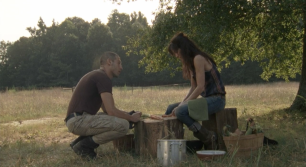 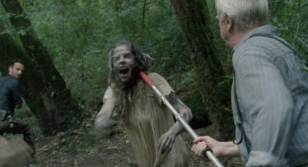 Somewhere in the forest, Dale is hiding the guns. He and Shane have a bit of a rigid conversation. The older of the two obviously wants to protect people from Shane. In his mind, Shane is the saviour of the group. The true leader. He wants to take everything by force, deal with consequences later. Dale points a gun at him, but Shane walks right to the gun barrel, letting it press against his chest. A small speech from Dale makes us realize exactly the type of people they both are, if we didn’t already.

Shane: “Hell man, if you think about it, in the cold light of day, you’re pretty much dead already.”

With everybody up at the farm, Shane arrives and puts guns in everybody’s hands. He has decided the rules for himself believing the place to be dangerous. Then, as T-Dog (Irone Singleton) exclaims “Oh shit“, Rick shows up. He and Hershel have the two walkers in tow. Shane, obviously, goes absolutely mental.
This whole preamble leads into one of the most intense, wild sequences of the entire series so far. Only two seasons in, but this show brings it! Shane first fires on one of the walkers they brought back; a couple in the body, finally working up to a bullet in the head. Time slows down. Hershel has clearly had enough and drops to his knees. Shane takes charge then opens up the barn, which lets all hell loose.
Out stumbles walker after walker after walker. Bullets fly, each person with a gun taking down the living dead.
And then the worst of all imaginable happens: from the barn comes one last walker, Sophia Peletier (Madison Lintz). The devastation in Carol is evident, having been there next to the barn all that time, looking for Sophia when she was already dead. Surprisingly, though, it is Rick who owns up and fires the bullet which kills the little girl for good. A brutal, effective moment. Rick does have what it takes, he just thinks more than someone like Shane. Still a very emotionally charged moment, even more so with the way this was filmed. Excellent finish to the episode. 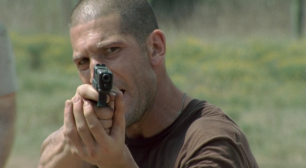 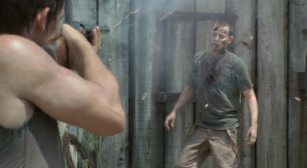 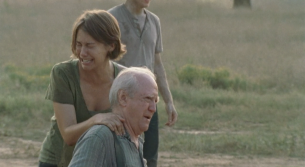 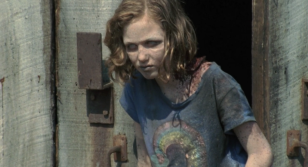 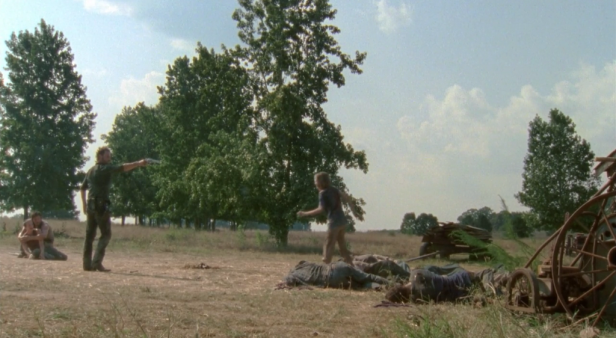 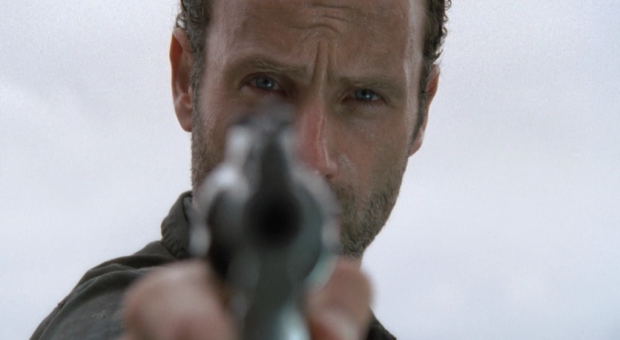 Next up is “Nebraska”, another exciting chapter in AMC’s Season 2 of The Walking Dead. Stay with me, fellow Deadheads!