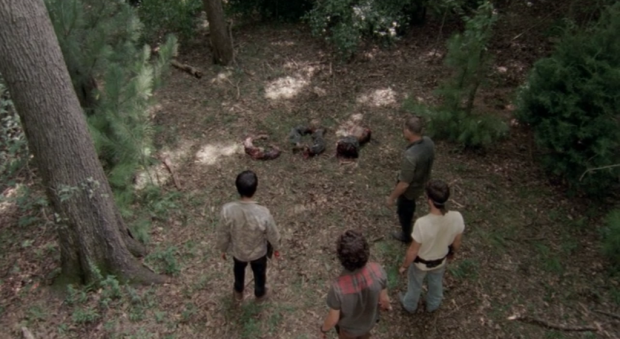 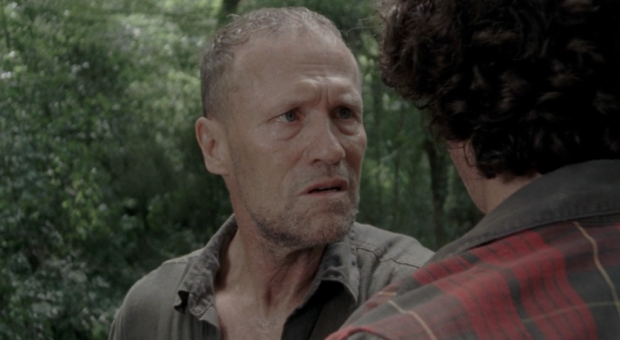 Merle Dixon (Michael Rooker) is leading the charge searching for Michonne (Danai Gurira). He’s got a couple people from Woodbury with him, including a young guy he calls Neil (Dave Davis). Out of the woods Michonne comes killing the others, leaving Merle and Neil alive. After the confrontation, Merle stands defiant: “Are we having fun yet?” he calls out into the forest, as she slips away after their fight.
Back to Rick Grimes (Andrew Lincoln) in the tombs of the prison, among the dead walkers, in the place where his wife dead. He received a phone call from someone who won’t say where they are, who they, who is with them. Rick pleads with them for help, but the woman on the other hangs up. Meanwhile, Daryl Dixon (Norman Reedus), Hershel (Scott Wilson) and the others eat together. When they do see Rick again he’s slightly better. But not near well. Glenn (Steven Yeun) talks about making a run for supplies, Daryl gives Rick an update on other plans. Yet off Sheriff Grimes goes again, by himself. Into the tombs.

In Woodbury there’s a better relationship brewing between Andrea (Laurie Holden) and The Governor (David Morrissey). She wasn’t impressed with their big show the night before, having Merle give off a big three-ring circus style act with walkers. Although, she wants to stay, and to contribute. The Governor agrees to have her.
Rick continues to talk to other voices on the phone. This time, a man. Again he gets hung up after a bit of conversation. Frustrating, no? Or is it all in Rick’s head?
Andrea proves her worth in the new town by taking down a walker, jumping over the Woodbury wall to get it. Only the girl she’s on guard with doesn’t seem too impressed. “This isn‘t a game,” she tells Andrea, who only looks confused. And she ought to be, having turned the world outside into just as much of a game, a “release” as she put it, as the circus Merle was putting off the night before.
Hershel finds Rick in the prison tombs. He tries to talk with the distraught father and widower. Rick reveals the call he received and Hershel tries listening to the phone; we don’t hear any dial tone, does he? Either way, Rick sends Hershel off and wants to stay alone. 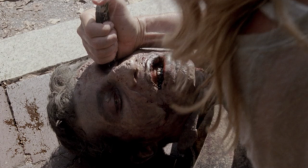 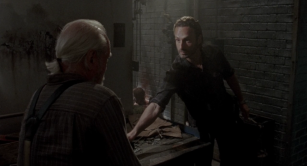 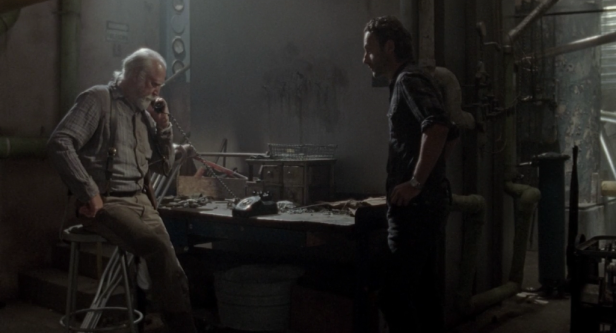 Coming across Michonne, the team of Merle and Neil find Michonne. Then a zombie attack breaks out. Everyone fends for themselves, as poor Michonne slices one walker open and its guts pour onto her stomach, chest, face. Nasty, and amazing makeup effects done by the KNB wizards.
At the prison, Daryl talks with Carl (Chandler Riggs), as he and a couple others explore the tomb-like tunnels. We get the story of Mama Dixon burning herself to death in bed after falling asleep with a cigarette. Then Carl tells Daryl about having to kill his mom: “I ended it. It was real. Sorry about your mom.” “I‘m sorry about yours,” replies Daryl.
Meeting with The Governor, we hear Andrea admit to enjoying the fights, as opposed to her earlier sentiments. He seems to have her pegged, to know what she’s all about. He also believes he’s “growing” on her. In other news, Merle is trying to get Neil back to Woodbury. The younger guy is giving Merle a bit of hell over what they have to tell The Governor re: Michonne. She’s been shot by Merle, and he’s sure she’ll die. Nevertheless, the oldest Dixon puts a bullet between Neil’s eyes and leaves it at that. Always a survivor.
Michonne is covered in the walker guts after crossing paths with Merle. Lucky for her: the zombies don’t even notice her. 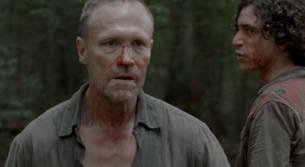 While on their run, Glenn and Maggie (Lauren Cohan) end up being watched from afar by Michonne. For her part, Andrea’s lounging in a lush green garden drinking booze with The Governor. They’re becoming closer and closer with each passing scene.
The most interesting is when Merle shows up where Glenn and Maggie are scavenging, Michonne still waiting in the wings. When Merle starts a fight things get tense. He makes Glenn drop his gun, Maggie at gunpoint in his own grip, all with Michonne watching. When they drive off she’s left alone, shot, and wondering what to do next.
Another call for Sheriff Grimes. He picks up the receiver and hears a familiar voice – Lori (Sarah Wayne Callies). The whole time he’s been talking to Amy, Jim, Jacqui. All their dead friends. This is a devastating scene for Rick, as he sort of compounds all his failures, crying and telling Lori: “I couldn‘t put it back together.” His breakdown is tough to witness. He’s meant to be that never-wavering alpha leader. But that’s also why Rick is a well written character, whose faults and stumbles are present, always. Yet further he soldiers on in the hardest, most trying times of this new life in the post-zombie apocalypse world. 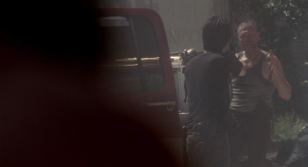 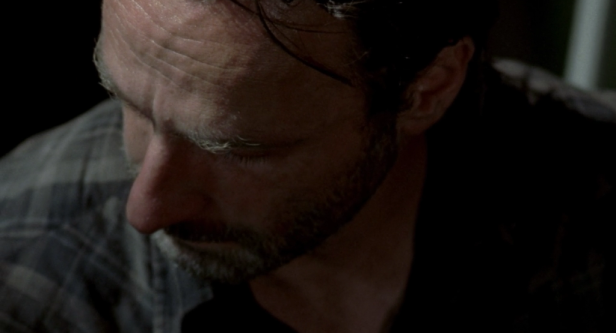 With Andrea in bed, The Governor’s successfully conned her into his life. Sad, as she’s one smart character. Usually. At the door Merle tells his boss about losing the three people in his search party, or, he lies about what happened. He says Michonne is dead, claiming the head and her sword were “torn up” in the scuffle. Things are lightened when The Governor is made aware of the new hostages, Glenn and Maggie. Merle is apparently getting ready to extract a little info.
Finally, Rick goes back to his son, his daughter, and the rest of the group. He looks long at his new child before picking her up out of Hershel’s arms. The light slowly returns to his eyes and brightens his soul a bit. We can sense a change in that moment, more of the incredible acting talent Andrew Lincoln brings to the role.
In the tombs, Daryl holds the knife belonging to Carol (Melissa McBride). He gets angrier and angrier, opening the door they’d noticed earlier was pushing open slightly and finds Carol herself, right there. A happy reunion in all of the bitter brutality. Outside, Rick notices something off in the distance. He gives the baby to Carl and heads down to the fence where he finds Michonne, carrying formula in a small handcart Maggie and Glenn were stocking up. They lock eyes before the episode cuts to back. 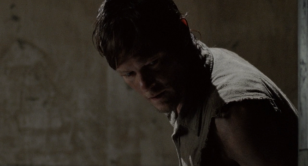 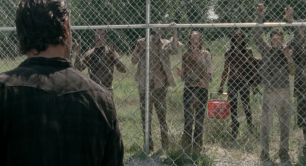 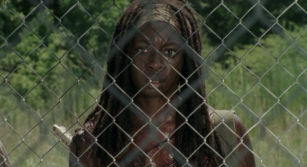 Next up is “When the Dead Come Knocking”. Stay with me.