After the end of last episode, Hap Collins (James Purefoy) and Leonard Pine (Michael K. Williams) find themselves taken hostage by Howard (Bill Sage) and his gang. Of course, Trudy Fawst (Christina Hendricks) and lets it all happen.
We watch Trudy take it all in. Heavy. She thinks about years ago, life before. The bird in a cage comes from Trudy here, as she tries to let one out into the wild: “It‘s time to be a bird.” Instead this turns into us seeing a bit of a sadistic side to her come out. When the bird won’t fly away, Trudy opts to drown it instead. Yikes. The look in her eyes says so much.
Out in the living room, Hap and Leonard on their knees get an explanation about Howard needing to “appropriate” their share of the money because there wasn’t enough left after the moldy portion. A potent word from Trudy – “sacrifice” – referring to Leonard and Hap giving up their share for Howard, Trudy and the crew. When Hap knows all about sacrifice.
The greasy crew, including Chub (Jeff Pope) and Paco (Neil Sandilands), hold Hap and Leonard at gunpoint. Hap digs a hole for them to bury the money, considering the police presence nearby. Best is when Leonard stands tall against the barrage of weaponry pointed towards him, and refuses to fill the hole in with the money; shows how he does not let anyone walk over him. 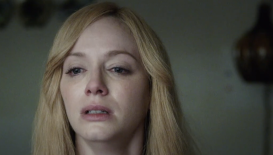 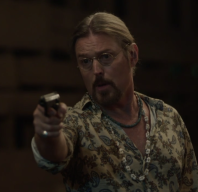 Later, Hap and Leonard end up getting Chub to talk. He gives up the plan for them to buy cocaine. That’s their plan for “sustainable income” in order to do a “Robin Hood” scheme; “to beat the system,” preaches Howard. Lots of great dialogue here in this sequence, as Hap and Leonard both give the gang a talking to, as well as take the piss at the same time. They up duct taped on the porch, bitching at each other in their unique way. Again, as I’ve said plenty already, Purefoy and Williams do such a perfect job with the characters, they really give Joe R. Lansdale’s writing justice in the sense that they make these two friends seem so believable, so natural together. You wouldn’t know but they’d actually been friends for most of their lives. Further gives authenticity to the writing, as their relationship makes everything else flow so organically.

Leonard: “Nice girlfriend you got there. Got more faces than a diamond.” 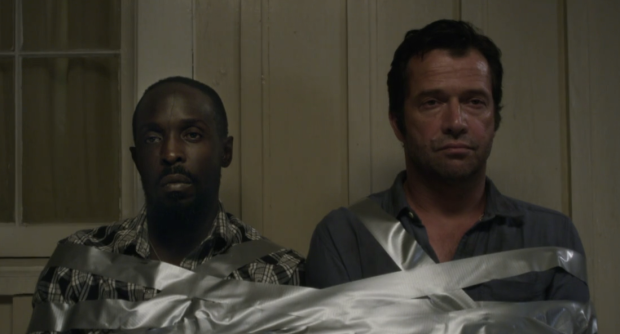 We get a deep look in Trudy during this episode; as if you didn’t know already with the title. But there are a frequent glimpses behind the mask, both frightening and also human. In the series’ current timeline, Trudy wrestles with her actions, and flashes back to the last time she really worked Hap over. I mean, she isn’t a monster. She’s a human, she is a lover. But there’s a certain amount of con artist in her, too. And ruthlessness. Yet she does question Howard: “Is this who we are?”
Chub also reveals his softer nature. While Paco’s a stone cold bad ass, Chub regrets how things went down. Further fueling the fire, Leonard tells him they don’t respect him, and says he’s just a “walking talking porkchop” in their eyes, which makes me laugh but makes me pity Chub at the same time. He refuses to acknowledge the group doesn’t particularly cherish him.
I dig the flashbacks in the series to this point. They’re never overly long, though, this episode dives a bit deeper than any yet. Still, they’re filmed in a slightly different grain, they have a dreamy feel. In this episode particularly, Trudy narrates us through some of the flashback, giving us some expository stuff but in a nice snippet-like way. They really do come off as pieces of memories.

Hap and Trudy have it out a bit, as the former sits with Leonard asleep on his shoulder, both duct taped to one another still. Trudy is going for broke on this latest scheme, following Howard – “Even if it means this?” asks Hap. So who knows what’s next for the unshakeable duo.
In the morning, Leonard decides they should just get up and go, glider on their back and everything. So they do. While Chub sleeps, they manage to get up and start heading towards the wood. They argue and bitch and get a good ways before Paco’s there, right behind them. Good effort, fellas. More duct tape for them both.
Then everyone’s packed in the van. Trudy and Howard decided on their own to only give a “deposit” for their cocaine deal, which drives Paco wild. And who are they meeting exactly? Why it’s Angel (Pollyanna McIntosh), and the maniacal Soldier (Jimmi Simpson). Certainly not going to be any trouble, right?
Things start getting brutal once Soldier calls Leonard a “nigger“, over and over, and Chub does not like that. He gets mouthy, not making anybody happy. And then Paco blows his brains out. Soldier and Angel take control of things, and Howard is devastated. It was all a fuck over. Paco did them in dirty. I knew something had to happen either way. Problem is they never brought all that money, so y’know, now they’ve got to go get that so Soldier and Angel don’t splatter everyone’s brains around the room.

Soldier: “Shhhhh. I do like to hear myself as I‘m speaking.” 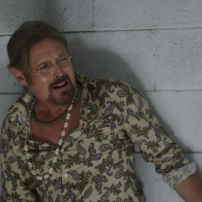 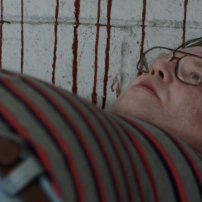 On the way in the van, Soldier gets crude, wondering who Trudy is with currently. He figures it’s whoever has the “biggest ankle spanker“, which he determines is Leonard. Of course it comes out he’s gay and more of Leonard being a straight up bad ass. All sorts of focus on Trudy, taking her down a few notches. Then there’s more of Soldier getting naughty, talking about Angel, their sexual relationship. Finally, Trudy defends herself a bit and says she won’t give Soldier “the satisfaction of being scared“, which makes things incredibly tense. Even worse when the cops are parked on the road where they’re all headed. “I love cops,” says Soldier with an odd look in his eyes.
Soldier does a good song and dance until Paco pulls his crossbow and pops a cop. This starts a massacre, as they finish off the other one, and Angel shoots a few more “essential” rounds into the already dead one. This horrifies everyone in the van, naturally. Hap and Leonard are along for a very dangerous ride. 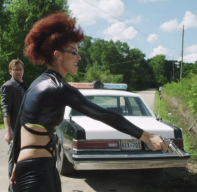 Extremely excited for the next chapter, the penultimate “War” again directed by Jim Mickle. Stay tuned with me, fellow fans. It’s getting dark and dirty now.