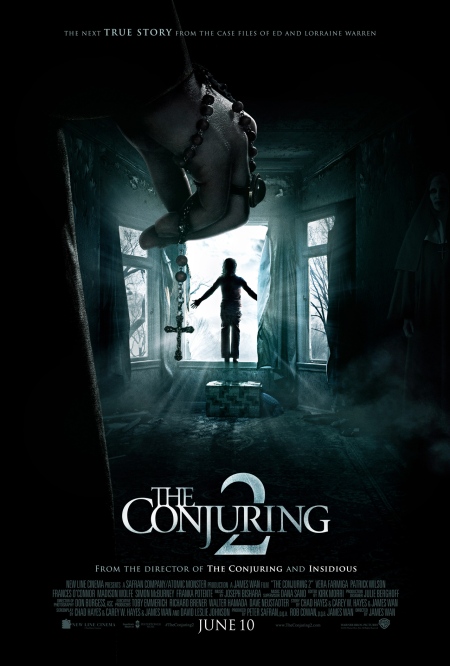 The Conjuring was an excellent modern horror; funny enough one that gave us a story set decades ago. What sold it for me wasn’t so much the scariness as it was the acting, and of course James Wan’s directing. Patrick Wilson obviously works well with Wan, as he does with Vera Farmiga who is fantastic beyond words. Together they make a strong trio while he gives the movie its visual wonder and they add the much needed genuine drama with their powerful performances.
What The Conjuring 2 does is turn up the terror. Almost instantly. The horror works its way under your skin. The first movie was a nice romp through scary territory, as well. Just not as nerve fraying and intensely as this second instalment. Moreover, the attention paid to the character of Lorraine Warren (Vera Farmiga) as the more damaged of her and her husband Ed (Patrick Wilson) is what makes the story even more fascinating. On top of all that awesomeness, Javier Botet plays Crooked Man, the horrific entity at the centre of the Enfield Haunting – the case which the Warrens take on in England. The possession and the haunting of the first film takes a minor backseat to the creepy Crooked Man. He will eat your god damn soul. With lots of good drama and strong characters, alongside heavy doses of supernatural terror, The Conjuring 2 is one of the best horrors of the past ten years.

The opening Amityville sequence is not only eerie in the way Lorraine walks around holding and firing an invisible shotgun, like Defeo. What makes most of it so great is the editing, the jump cuts moving us from living to dead Defeo family victims; as if the wounds appear, not that they’re made. This could easily have come in a hyper-bloody scene where Lorraine witnesses the murders at her own hand. Instead it’s a truly unsettling opener to the story, as we see Lorraine, once more, inflicted with terrible spiritual pain. Great way to start the film off.
One reason I dig The Conjuring, both of them, is because Wan really has the goods of a classic filmmakers. His desire to shoot things in a certain way, to make it look slightly different than everything else is part of why he’s interesting. He does the jump scares, he uses techniques common to the genre. The way he does it is how he innovates. He even improves with the second film in his series. Several times when I expected him to go for the jump he went with an unexpected calm, and the tension only built up more following these moments. That’s how Wan gets the audience at times, by luring them into a one, two, three, WHAM! where we build and build to the snapping point. Finally, and only then, Wan gives up the goods and employs a proper scare to rattle us.
Rather than shoot in the typical way so many mainstream horror movies seem to be shot, Wan opts to go for a nice colour palette and a grand directorial style, aided here by the cinematography of Don Burgess (Contact, Spider-Man, Source Code). There’s one amazing scene where we first meet the Hodgson and just the way in which Burgess takes us around the house in a one-take (likely with a few keen cuts) shot – beginning on the outside coming in – is a spectacular instance of how The Conjuring 2 is even better, more effective than its predecessor.

Even though both Ed and Lorraine Warren are troubled through their paranormal/supernatural work, she is the one most plagued by the visions of the demons and the entities they encounter. Wilson and Farmiga do great work together. However, she’s the one whose experience becomes the most visceral in the whole film. Often Ed is in danger, or perceived to be, yet we watch as Lorraine suffers mentally just to help others because of her gift. The scene where she sees the nun go into her husband’s office is downright spine chilling! Loved it, so much. When you get a scene that hits you in the gut with fear, it’s a spectacular bit of fun. That bit with the painting, the shadow on the wall, you’ll be pleasantly frightened, too. I hope. Best of all, in terms of acting, is the relationship between Ed and Lorraine, which Wilson and Farmiga play to the fullest. They feel genuine, warm, they appear dedicated to each other and their work. You can’t ask for more than what these two offer. 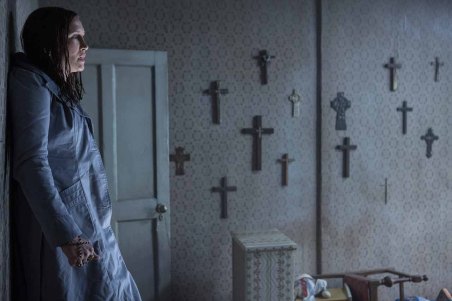 The Conjuring 2 is one of the better horrors of the past decade. It’s also one of the best horror sequels out there. I don’t care about the Enfield Poltergeist being discredited as a hoax. That’s not why I enjoy either of these movies, I don’t come for truthfulness. These stories are based on supposedly true events. However, the entertainment and the horror is what I’ve come for, and that’s exactly what you get. Especially with the sequel – I loved the original, but this blows it out of the water in both execution and scope. The entire two hours (and a bit) are enthralling. There’s not a boring, wasted moment. For that reason, this is a 5 star bit of horror cinema. I absolutely agree with those who feel Wan is one of the better horror directors around today. Because it’s damn true. I’d like to get another Conjuring movie out of this franchise. This one stepped the game up. Moreover, it once again helps prove that not all horror sequels are worthless, that some can in fact capitalise on the excellence of the movies which came before them.