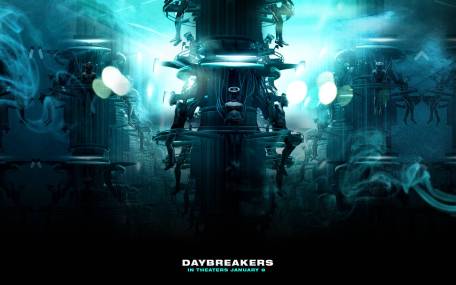 With so many vampire movies out there, especially after the fame of the awful Twilight series, new innovations in the plots, or even the storytelling itself, are necessary. Daybreakers is fresh and exciting. Not everything is 100% original, but the film uses vampire love and what we’ve learned from vampire flicks in a non-conventional way. It could’ve been a serious film, all the way. Halfway through the plot things dive into a bit of silly action and other developments rather than stick with its sobering look at a vampire economy falling apart; a vision of how people today in society burn through their resources, augmented into an action-horror-science fiction picture. Although it ultimately becomes a mess of bloody action, there’s a lot of great stuff to enjoy. Not often do we get an Ethan Hawke genre flick, such as his other turn in Sinister a few years after this movie. So with him, Willem Dafoe, and the glorious Sam Neill upfront and centre, there are nice performances to help swallow the ridiculousness of the film’s last third. Directing-writing partners Michael and Peter Spierig give Daybreakers a steely, clinical look to take us inside a world dominated by vampires. Even when it falters, this is a better than most vampire film because its story takes a unique path. Daybreakers offers interesting themes and an action packed finale, despite being better than what it gives us.

The vampire economy running on blood has left some vampires homeless, starving. Quickly there’s a sense of a class division even amongst the vamps. Rich and well-to-do vampires have better stuff, some people have more access. Then there are the remaining humans who’ve become second class citizens, to the point of being used for a blood source. Here, the rich now literally sucking the blood of the poor. Just like nowadays, as big businessmen and politicians bleed us, figuratively, dry.
We can look at it like blood for the vampires is oil for us in today’s society. We are consistently draining natural resources, the rich get greedy and refuse to invest in new, alternative sources for energy, and in Daybreakers the vampires doesn’t understand their vampirism is destroying nature, as well as decimating humanity. Instead of looking for a less negatively affecting alternative or searching for an answer or solution to the problem, the ruling class(/vampires) opt to just keep using and using. Edward Dalton (Ethan Hawke) represents the rogue insider wanting to act on change, like a man on the inside of the cigarette or oil industry, afraid to fully come out and act until he’s driven to it.
The vampire world is rife with “blood related crime” and the shortage of resources makes you wonder: will humans cling to oil in the same way the vampires do to blood? We keep killing the Earth, oblivious to its true consequences, because we’d rather not charge too much, instead enjoying the lifestyles we indulge at the expense of nature. 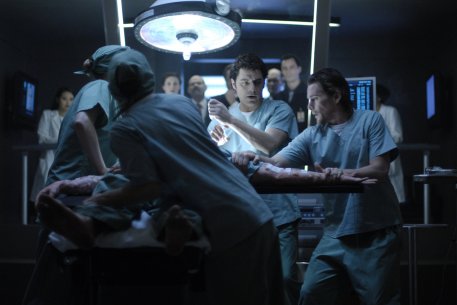 As I mentioned, the style is something to behold. A very cold, blue-tinted colour palette makes everything feel much how what you’d imagine the vampire would look like. There’s also tons of wonderful makeup and lighting to give the vampires a frightening appearance; ghastly, almost genuinely tough to look at sometimes. Dig the eyes, they look cat-like, animal. Daybreakers relies a bit too heavily on CGI at times, although the CGI they do use is pretty damn solid. Such as a couple of the action scenes later in the film, which are well executed, and they’re limited so as not to get overbearing. The best one is when a military Humvee slides into a beam that impales the driver, followed by a large explosion. Perfect use of CGI.
But the moments of practical special effects are much more impressive. An early one, so simple and yet so effective, is when Edward sits with Charles Bromley (Sam Neill) and stirs his coffee – the blood swirls around, mixing together with the coffee into something reddish. Weirdly creepy. My favourite is the makeup and design fo the first feral, hungry vampire we come across in Edward’s apartment – it’s hideous, intimidatingly powerful when starting to throw Edward and his brother Frankie (Michael Dorman), and the detail of the makeup is unreal.
SPOILER ALERT: the two best moments that involve at least SOME practical effects are when Bromley dies (vamps tear him apart before decapitating the head in bloody ecstasy) and during the scene where Frankie redeems himself for his earlier callousness (the military vamps do a number on him and litres of blood pour out into the frame).

Elvis (Willem Dafoe) adds a great element to the story with his cured vampirism. Very interesting and part of why I love his role. The vampire logic in his idea for a cure is fun, adds something exciting to the vampire sub-genre. After the point where Elvis shows up, and Edward undergoes the experiment, the plot kind of goes to shit. There’s definitely a couple moments worth seeing, the action isn’t totally unwatchable. But you simply can’t help wonder what could’ve been. There’s an unbeatable sequence in the finale that is perfect – when cured people are bitten again, their blood turns other vampires into humans, so this causes a frenzy of biting, killing, gore splashing everywhere.
If the Spierig Brothers were able to keep a focus on the social commentary that’s found earlier in the screenplay, Daybreakers might be close to a 5-star affair. It’s still awesome, though again, you can’t help imagining where the plot could’ve been taken if action and bloodletting didn’t take precedence over story. You can find a lot worse, and it’s one of my favourite new vampire movies over the past decade or more. So many fall into formulaic nonsense. Despite dropping off near the end, this is a winner with a nice serving of blood, an innovative little story, and good actors to hold the story up as much as they can.