I’m actually a fan of Jaume Collet-Serra’s earlier films like Orphan and yes, House of Wax (which is actually a decent slasher remake; not great, decent), more than I like his recent directorial efforts. He has a hand for the horror-thriller. Sure, he does action well and he can go for the real big budget stuff. But keep it a bit smaller, less outrageous, then what he does with it can turn into a creepy thrill ride.
The Shallows came out of nowhere and hooked me. Ever since Jaws, I’ve always been terrified by the ocean (at the same time finding it incredibly interesting) and of sharks. Spielberg got under the skin of millions. And likewise, ever since the birth of the summer blockbuster with the shark named Bruce, other filmmakers have sought to replicate some modicum of Spielberg’s success; not just shark movies, but tons of other creatures came out of the woodwork to try and capture that glory.
What Collet-Serra does with the shark sub-genre is put Blake Lively (who’s surprisingly amazing in her central role) in an impossible situation, one that we’ve seen before several times, and instead of heading a typical direction he keeps the viewer on edge with interesting action. Most of this is due to a spectacularly tight screenplay by Anthony Jaswinski (who penned the fantastic 2014 horror Kristy), which mixes the intense personal drama of a single character with those nasty horror and thrilling action scenes we’ve come to expect from a movie with a great white shark as its co-star. 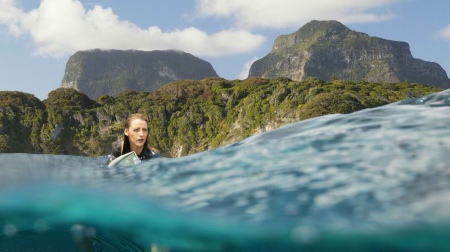 To shoulder the responsibility of an entire film as a leader actor is one thing. To spend the whole plot stranded in the water or on a rock commands an entirely different type of performance from a lead. I’ve never been wowed by Blake Lively in anything really. This film changes all that. Her presence as Nancy is strong. She’s charming, funny. The writing gives her lots to do; love how she’s been in med school, so as she tends to her own wounds out on that rock Nancy talks like she would with a patient, only to herself, obviously. If there were lesser actresses in the lead role, The Shallows might be a jagged, trying 86 minute run. Instead, it’s a lot of fun to ride along with Nancy on an emotional, visceral roller coaster through the waves.
There’s a lot of effects due to the shark. A lot of that is pretty well done. Most times we get a straight up look at her – yes, she’s female! – there’s a sinister presence. Her size is intimidating, but Collet-Serra further makes the shark scary by having it lurk behind waves, just below the surface of the water. Like an underwater Michael Myers. It’s actually only in the climactic scene when we’re truly staring at the shark close-up. The best of the effects are saved for the great white’s bites. When Nancy’s first bitten, the water surrounding her turns crimson and it’s like a mist more than liquid, spreading everywhere. Two of the best bloody moments are (i) the drunk man onshore who tries stealing Nancy’s things and meets the shark; and (ii) after Nancy’s bitten and gets to the rock her homemade suture is vicious – the bite looks fantastic in terms of practical effects work and Lively sells the pain.

The Shallows is a smart, taut thriller. On the same beach where her mother first lounged after Nancy was conceived, the beginning of her life in the womb, Nancy must fight to keep on living. It’s a suspenseful journey, even for a film that spends so much time in one location; we do occasionally move from rock to beach and a couple other little spots, but most of the plot is spent in a minimal location. The first time Nancy encounters the great white is a unique shot, reminiscent of those Google photos we’ve seen on articles foolishly titled “The Craziest 10 Photos You’ve Never Seen” – as the shark stalks her, the shadows is visible in a mounting wave. Before that, there’s an excellent sequence where Collet-Serra psychs the viewer out, making us believe the shark is about to strike yet deferring the moment, so that tension builds and builds until finally the major action of the plot breaks out. Then, a bit of horror and lots of thriller elements weave their way into the film to mix with the personal drama of Nancy. I also loved the atypical call for help scene: usually a movie goes for someone not hearing the movie’s victim, misunderstanding, or something similar, but the script from Jaswinski offers a neat little scene where a character offers no altruism and only proceeds to steal from Nancy.
On top of everything in between, the cinematography is spectacular. The ocean itself looks so terrifying in helicopter view wide shots, its vastness staggering. At first, Collet-Serra makes the ocean feel beautiful and worthy of awe. Later, gradually, this changes. The ocean becomes foreboding, like each wave has a perilous feel. Now and then, we’re dipped below the water with a brief look. This looks great while relentlessly teasing us with the appearance of the shark before it arrives. Repeating the technique doesn’t jade the viewer. Rather, it puts you more on edge, waiting for what you know is bound to happen. We’re further tricked by a POV shot a la Jaws, turning out only to be a dolphin. In the end, the last shot involving Nancy and the shark is perfectly executed. Without spoiling much, this last action-packed scene is unexpected, chilling. Honestly, the way it’s shot and the effects, it’s one of the best shark movie finales out there. 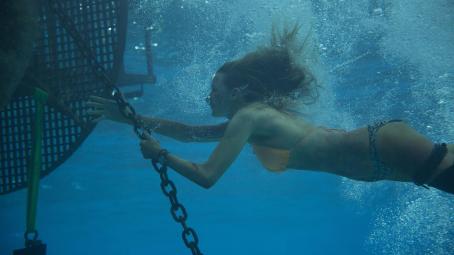 This is one of the best movies I watched all summer. Each year, I hope someone will make a fun summer romp, usually something shark-related. Not often I can say there are great ones. The Shallows makes the list. There’s a nice little drop of blood here and there. The shark is creepy, even if it’s all CGI; I didn’t expect the shark to have character, and yet Collet-Serra manages to make it the dual lead next to Lively. Speaking of which, Lively is on everybody’s map after her powerhouse turn as Nancy. I’ll definitely keep my eye out for her from now on.
There’s still a few things I didn’t love. Personally, I could have used more about Nancy in the screenplay. We do get some, just not enough. I would’ve liked to get a bit more – subtlety is fine, her character was just intriguing enough that I’m left wanting extra. But above everything, Jaume Collet-Serra exemplifies his most interest qualities in a movie that doesn’t involve Liam Neeson kicking ass and taking names. He is capable of building genuine tension and suspense out of nothing. He has the markings of a director who knows his way around the hair raising thrills of horror without needing to necessarily dive all the way into the genre. I actually went to see this a second time after watching it the first because for 86 minutes I was gripped, I had fun, I dropped my jaw at times. A great, four-and-a-half star shark film, in rank with some of the best.