In the villa, a family of three – mother, father, daughter – looks to be escaping. They quietly make their way through, past the empty streets and sleeping people, to try getting through the wall of zombies. Papa cuts open a walker and they all paint themselves, trying to make it through the wall like that. This opening sequence is chilling. An aerial shot craning upwards, wide on the ground, shows us how many of the zombies stumble around in the fenced off area. The family, luckily, gets out alive.
Then out of nowhere comes a vehicle. Some men confront the father. Marco Rodriguez (Alejandro Edda) pulls his gun on them, eventually forcing them into the vehicle, too. And off they go.

Ofelia Salazar (Mercedes Mason) is off on her own. She’s doing fine. Killing zombies, taking care of business. A lot easier just to watch one person’s back. But then again, there’s nobody to watch yours except you. That isn’t always easy. For now, Ofelia finds herself near the ocean on the beach in a little house. She remembers life, before the fall and the zombie apocalypse. Her fiancee, their plans. All that’s long gone, painful memories at this point.
Back at the hotel everybody does their part to get things going. They’re locking the gates, making sure the electrical systems and generators are running to the best of their abilities. A garden’s being planted. Madison (Kim Dickens), Strand (Colman Domingo), Alicia (Alycia Debnam-Carey), they’re actually enjoying themselves for the first time in so long. Although Alicia worries for her brother, Nick (Frank Dillane). Speaking of Nick, he’s spent the night with Luciana (Danay Garcia). They’ve found about the family taking off in the night; the father was the one who helped get water for the villa. So Nick and Luciana have to take charge.
Tragedy strikes when the mother of the bride stabs Strand for having dispatched her daughter. Some of the hotel survivors try helping Victor, as do Madison and Alicia. One of the survivors studied in med school. He works to keep Strand alive.
When Alejandro (Paul Calderon) discovers the family missing from their villa, he isn’t happy. Mostly he feels slighted, so it seems. There’s something more here. Something boiling. I feel like Alejandro is wearing a mask, or at the very least hiding something.
Problem at the hotel is Ilene (Brenda Strong), the grieving bride’s mother. Madison lays down the law: “If anyone raises a hand to another, they‘re out. Any of us; gone. That‘s how it has to be. That‘s the only way this works.” And such is the grounds for a new, primitive society in the hotel.
Nick is starting to wonder about Alejandro, who, for his part, doesn’t exactly appear calm and collected like he did once. He and Luciana want to head out to take care of their business. Except now Alejandro says nobody leaves their villa, for as long as he says. Hmm. That’s definitely sketchy. 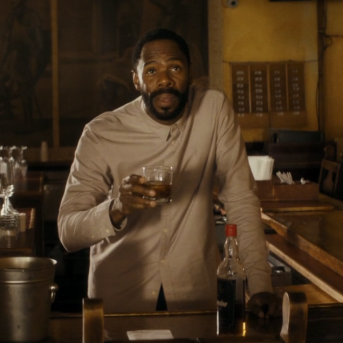 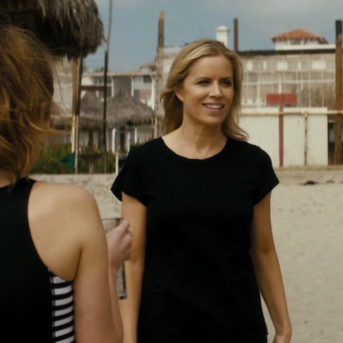 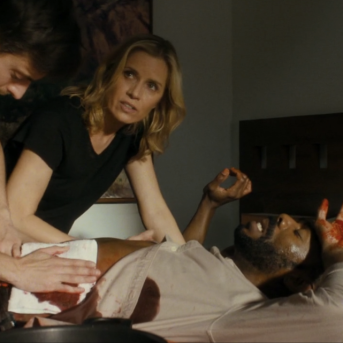 Elena (Karen Bethzabe) and Madison are on the road to seek out medication and supplies to help Strand. They bond a bit, as Elena tells her own personal story, more than we’ve heard yet. And just so happens it involves drug addiction, or someone of hers addicted to them. Something Madison knows too well. Her own son was lost in the drugs. At the same time, he’s lost in Mexico. Stuck in Alejandro’s little “colonia” (a creepy word if you think of this) – the villa he’s ruling over.
But the villa and the hotel are connected. Madison and Elena head to that big supermarket the gang controls, that’s where they go for the medical supplies necessary to treat Strand. Will this soon bring Nick and his mother together? Alejandro’s kept Nick from going anywhere today, so the reunion will have to wait. While Madison and Elena do their shopping, Marco is upstairs questioning the escapee father about the colonia from which he ran in the night. When Madison gets wind, via Elena, that an American came with Luciana about the drugs, things get tense. She flips, wanting to find her boy. Before Elena has to get them out fast.
Well, Nick is worrying more by the minute. Alejandro is gone paranoid, to the extreme. Acting like he’s been burdened with everything. He requires faith. “So you want me to just follow you blindly?” Nick finally outright inquires. However, it’s only more control Alejandro wants. That’s how it seems to me. Either way Nick doesn’t want to be under anybody’s thumb. He’s worried most about people going without water, and that Alejandro keeps pressing people not to leave, under any circumstances. You know the former junkie won’t have that. His philanthropist side has emerged larger with every episode he’s in. Simultaneously, he softens the hardened exterior of Luciana slowly. 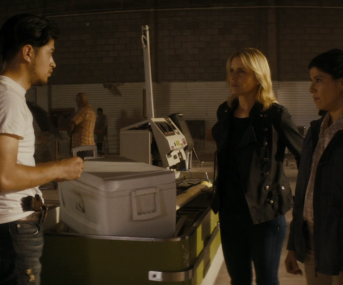 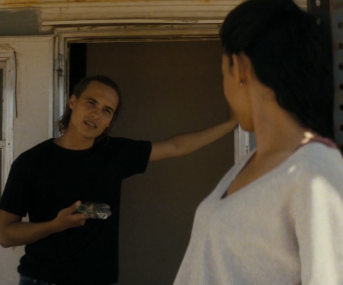 Everything’s slipping. On the rooftops, Nick spies Marco and his henchmen with binoculars: looks like they’ve found Alejandro’s colonia. Uh oh.
Back to Ofelia – she flashes to memories of her mother Griselda (Patricia Reyes Spíndola), talking about men and how you find the right one, et cetera. All those things she’d be thinking on the edge of a marriage. Her mother also talks about the violence of where they lived, and that leaving their original home wasn’t a struggle; they had to leave. They did not want to “live in fear” everyday. Griselda says she’d do anything on Earth for her family: “That is love.” On her own in the zombie apocalypse, heading back towards the USA, Ofelia understands her parents more than ever.
At the hotel, everybody’s going a little crazy. Elena isn’t pleased with the way Madison is acting after possibly hearing of Nick. She turns on the hotel lights, she’s made everything difficult with Marco and their crew. Madison is letting her head get clouded and Alicia doesn’t see things the way her mother does; not about the new world, not about Nick and what he did or where he’s been. Lot of tension between these two.
Although, out in the darkness Travis (Cliff Curtis) can see the hotel lights. When they shut off, he walks in their direction; alone. His son is nowhere to be seen.

This was a stellar episode! Loved the twisting  bits wondering if Madison will finally find Nick, the intrigue about Alejandro and his paranoia. And now Travis is on his way back to his wife, hopefully having either put his son down or left him with those crazy dudes.
Next episode is titled “Date of Death” and I have a feeling we may see a cast member depart. Will it be Strand? I hope not. Someone else, please. I dig Victor. We’ll just have to wait and see.