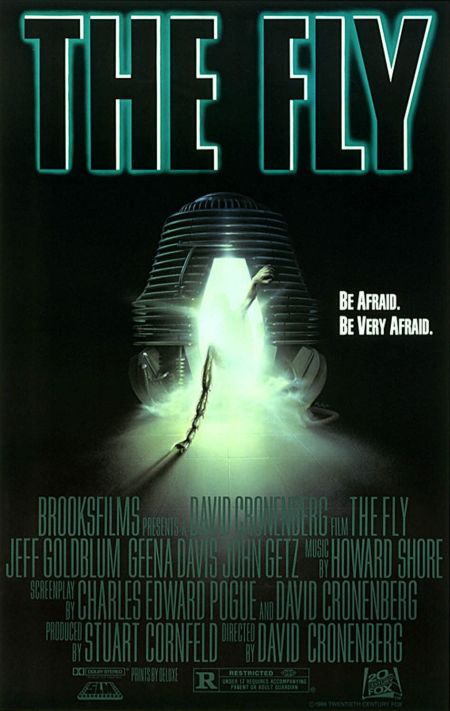 O, David Cronenberg! Thy body horror is strong, gruesome, wild.
You can do a lot worse than this for a Halloween season. Starting off with a couple more ghostly films, The Fly is as nasty as any other horror film you’ll see. Maybe nastier. Yet even as Cronenberg dives deep into a genre of which he is surely master, he always manages to hold onto metaphor, allegory, deeper meaning in general.
Telling us the story of hapless inventor Seth Brundle (Jeff Goldblum), questions of man’s venture into unknown science surface; lust for power sits chiefly in the centre of all the screenplay’s attention. The Fly isn’t a metaphor, it puts us directly in a messy science fiction situation where horror takes the reigns and flies away with them. In the driver’s seat is Cronenberg with all those icky tricks up his sleeve. In the passenger seat, his audience. Goldblum, opposite the fantastic Geena Davis as reporter extraordinaire and his eventual girlfriend Veronica Quaife, is magically weird in the lead role, which does wonders for every last turn of the screenplay.
But if you’ve never seen this, or any of Cronenberg in general, be forewarned: there’s so much great writing, although the yucky transformation Brundle undergoes takes precedence over everything, and not every stomach is as strong as mine.

The script references Alexander Pope, using one of his lines in a twisted revision, as Seth tells Veronica ominously: “Drink deep, or taste not the plasma spring!” This reworking of Pope comes from the great poet’s An Essay on Criticism. This speech partly, because of this reference, goes to show how lost Seth becomes in his own quest, or lust, for power. He uses the words of one of the greatest English poets to have ever lived as his own, appropriating the words to fit his needs. Just as he bends science to his will. Brundle gets stranded along the way, especially after the transformation. He’s consumed by the will to be ultimately powerful. He has changed life, science, knowledge, all with his own mind and ideas and work ethic. However, as Pope says in that same quote right before his line which is actually about the Pierian spring (see: The Muses), he also cautions that a little learning is a dangerous thing.
Ah, yes – the horror of knowledge. This line is clear in how Seth abuses science. He doesn’t fully know the effects of what he’s about to do, into which dark pool he’s ready to dive. That doesn’t stop him, either. Thinking he knows everything, Seth forges ahead with a little learning instead of ENOUGH learning. Hubris of science is his undoing, believing in himself far too much. There’s also a part of Seth wanting to impress Veronica, finally finding somebody interested in him genuinely, as well as professionally. And so his lust for power, plus the lust for Veronica, drives him down a corridor filled with terrifying revelations.

Funny how the wound Brundle experiences in bed with Veronica is a computer chip, or a chip of some kind. It sticks into him around the shoulder on his back, right where a wing might be. This first penetration of the body is where Cronenberg sets us on the body horror path. The shot is only brief, but we watch as Veronica pulls the chip and its little pins out of Seth’s skin, the small, bloody scrapes left. Later, this is paralleled by the appearance of wings, fly parts protruding from his skin. Whereas before it was a circuit, a chip, now it is organic. And still, Seth is half-man, half-other. Regardless if it’s a piece of a circuit or the wings of a fly, he has given himself over. No longer does Seth control himself and his body: he has given it to science, wholly and hideously. This, of course, becomes more disgustingly obvious through the furthering change in his physical composition, until he’s less man and all but entirely insect.
I think if you wanted to look at it in a more personal way, The Fly is a metaphor for symbiotic relationships, in the way people fall into relationships and do things they might not otherwise in order to stay together. For instance, Seth doesn’t decide to step into the pod until Veronica heads off to see her old boyfriend; though there’s nothing to suggest she wants the guy back, Seth feels slightly jilted. So he foolishly steps into the pod after rambling about Veronica a bit. By the end of the story, he’s begging her to stay away. He knows that he’s become something monstrous, no fault of hers but all due to the fact he perceived pushing his experiments to the limit as a way to somehow impress her, keep her around. After his transformation becomes grotesque, Seth finally realises he’s become someone else because of their relationship, and not in any way, shape, or form is it a good thing. For all the ruminations on power and its corruption, Cronenberg’s The Fly also works well on the level of a searing personal drama. Just so happens it’d be a personal drama with a heavy helping of sci-fi and horror to boot.

I love both Goldblum and Davis. They’re great together, and separately they’ve got different strengths. The female part for Davis isn’t necessarily typical, she does have a strength to her which makes Veronica interesting. That’s a large part of why I like the character relationship between Seth and Veronica, because he’s more of a timid, shy, weak sort of person. That is before he meets her. Then this change happens. Previous to the nasty transformation, Seth discovers a power from his experiment, and in part he sort of feels she has something to do with it; she gave him a newfound sense of confidence, this unlocked everything else. But in the early stage, I love how Seth is less powerful, and we get all that from Veronica. Once everything starts changing, Goldblum really gets awesome. He dives headlong into the mad scientist aspect of Brundle, which makes things both darkly funny at times and outright wild once the story breaks down.
Absolutely a 5-star classic in my mind. Yeah, I love the Vincent Price original, too. Cronenberg does numerous horrific things to make the experience all the more eerie. Throughout the film, after Seth’s change commences, there are these nice moments where the transformation is clear, yet still in sly ways. Such as how Seth loads down his coffee cup with sugar, scoop after scoop, unaware he’s even doing it.
The writing is splendid in the right horror way, the acting matches all of that. Cronenberg has made plenty of good work. This is one of his most truly disgusting pieces, which is saying something.
But god damn, look at that Brundlefly!