FOX’s The Exorcist
Season 1, Episode 5: “Through My Most Grievous Fault”
Directed by Jason Ensler
Written by David Grimm

A demonic confrontation is upon us!
Will the power of the Lord compel this evil force from young Casey Rance (Hannah Kasulka)? Can Father Marcus Keane (Ben Daniels) and Father Tomas Ortega (Alfonso Herrera) band together and do what’s necessary?
The two priests sit together on a stairway not unlike the one from William Friedkin’s original classic, the first adaptation of William Peter Blatty and his terrifying novel. Above the man, a dark sky brews in metaphorical turmoil.
Inside the Rance house, Kat (Brianne Howey) sleeps, as does her mother Angela (Alan Ruck & Geena Davis). Dear ole dad Henry (Alan Ruck) is up with his daughter, in the grip of her possession. She’s chained, starting to look pretty ghastly. Henry tries to pray over her and comfort what humanity is left. Suddenly Casey speaks to her father sweetly of a “secret” and asking if he’d like to hear: “Closer,” she says. Oh, no. She pulls him tight, as the demon whispers and tongues her father’s ear. Yuck – in the best horror way. Only afterwards Henry’s acting strange.
I wonder: what did that naughty demon say? I’m sure we’ll find out sooner than later. It’s starting to sow the seeds of distrust and paranoia amongst those closest to Casey.

Poor Kat. She’s still heartbroken, in the throes of sadness and guilt at once. She leafs through all the memories of her lost love. That is, until the noises from the room next door begin. She hasn’t yet discovered the gruesome truth of all the exorcism talk. Angela isn’t having an easy go of it, either. She feels a ton of guilt, too. All the while she tries drowning out the noise of the priests doing their duty upstairs.
And what about upstairs? Father Marcus reels off prayer at the demon, who speaks directly to Father Tomas, calling him out for being “a liar” and ranting at them both in English and Latin alike. All prior to doing a few parlour tricks, like pulling out one of Casey’s toenails – “Isn‘t it wonderful?” asks the demon in creepy rhetorical fashion.
Henry isn’t acting normal. He starts talking a bit about God, asking whether she’s ever lied to him. She won’t answer, and it becomes clear there’s something she’s hidden. What is it, exactly?
The demon turns up the heat on Father Tomas, speaking as his grandmother from beyond the grave. He tries to resist, as Father Marcus advises not to “let it in your head.” But Ortega fights back, tossing holy water and trying to push against the unholiness. Then the flying act starts, and Casey’s body is tossed from one end of the room to the other. It won’t stop “till she gives me her rancid little soul,” spake the demon. Both priests know they’re in for a far large, more brutal fight than anticipated. That Salesman (Robert Emmet Lumney) is back, of course. Literally sitting on Casey’s chest; a perfect metaphor for the life being choked out of her. And he stresses to the girl: “Bring her to me!” So is the real target Casey, or is it Kat? Or maybe he’s just talking of Casey’s soul. Who knows. I just feel like there’s more to Kat and her personal story, that it’ll play into the overall story more relevantly eventually.
Tomas hears the voice of Jessica (Mouzam Makkar) calling him. You know it’s just the demon, imitating, twisting at the souls of others. Yet in the room is a vision of her. Can Tomas repel the “unclean spirit” on his own? No, he can’t, not on his own. Marcus isn’t happy with it, Tomas is compromised, and in the middle of it all Kat gets a shocking look at her sister lying on the floor. That can’t be good for anybody.
So again, it’s Father Marcus v. demon. The nasty voice of the tainted soul comes from Casey, taunting the excommunicated priest with everything in its arsenal. “Let the blood of Christ redeem you,” he yells, pressing that rosary against Casey’s forehead. From nowhere comes a vision of Marcus’ mother, speaking to him: “You was a mistake. You was never supposed to happen.” That’s fucking rough. Oh, and Marcus, his dad beat his mother’s brains out with a hammer. She continues saying terrible things to her son, the demon rants more. But it’s not enough to take him down to the demon’s level. At the same time, Father Tomas falls down the rabbit hole with Jessica – sexually; has the demon broken him completely? 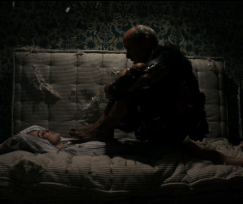 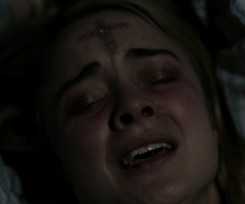 Just as I guessed, Kat called the police. This is really going to turn things into diarrhea for everyone at the Rance house, Father Marcus included. Right before he can finish things the police break in, taking him away. And the demon plays up to the expectations of the medics, the police, making it all look appropriate. Another cog in the giant wheel of its game.
From the back of the ambulance Kat sees Casey – or the demon – smile right at her. Oh, great. You already know Casey won’t be making it to the hospital. That evil force all but obliterates the ambulance, leaving the paramedics bloody and dead. Sitting in jail, Marcus hears the news of it all on television. He deciphers something the demon told him: “He is coming.” Sound familiar? Yes, yes. The papal visit.
At home, Henry keeps prodding for truth from Angela. He urges her to confess. It all has something to do with that Bible he found in the closet, with the feather, the flowers. What does it mean? Did she cheat? Did she have an abortion? What is it?
Meanwhile, Father Tomas is worried for the sin he’s committed. He’s gone against his vows. He must repent. In church he comes across Angela, she too looking for forgiveness, trying to repent for her own sins. She tells him a bit about herself and that she had an “imaginary friend” who came in the form of a little red bird. She eventually became somebody else, moving away from her old life and getting far from her mother.

But guess what? Grandma’s back. The secret is out: Angela was Regan MacNeil! No way! DID NOT SEE THAT COMING. Shit.

What an impressive twist to this episode. I cannot wait for the next chapter, this is wild. And to think, I thought it was some cheating or abortion story. She blew that out of the water.