Casey Rance (Hannah Kasulka) is still possessed, her body tortured, her mind even worse. Father Marcus (Ben Daniels) is trying to do the exorcism, and now Pazuzu comes face to face with Regan MacNeil (Geena Davis) a.k.a Angela Rance, who came with Father Tomas (Alfonso Herrera). “Rags, bloody Rags,” the demon speaks to Angela. When Kat (Brianne Howey), Henry (Alan Ruck), and Chris MacNeil (Sharon Gless) arrive things get even more complicated. The demon lets Casey out long enough to haul them in. Taunting Kat about her dead lover, yikes. Then Pazuzu starts to toss the people around, and warns Angela about Casey’s new place in Hell: “There‘s room for you, too.”

Fathers Marcus and Tomas go about their exorcism, as Chris and the Rances wait outside. Finally a nice reference to Merrin in a quip from Henry. At the same time, Angela is staying strong to try making things easier for her family. Mother Bernadette (Deanna Dunagan) is out trying to keep a lid on the media, as well as the police. Naturally everybody’s sniffing around.
Over with Cherry and Lester Rego we find Father Bennett (Kurt Egyiawan) getting patched up after his encounter with the possessed homeless. They call the police on a burner to report the organs, too.
Continually we see Tomas and Marcus in each other’s faces. They resort to blows after insulting one another, all the while Bernadette is brought to her knees with the sound of flies swarming around them. Evil lurks around them all, as the demon laughs to itself at their fighting. So damn creepy, I love it. Marcus and Tomas know their best chance to fight the demon is to let Angela help. And she’s ready.
Despite the objections of Marcus, they let Angela into the room. He warns that if she starts feeling it poke around her head then they need to back off. “Hello, mommy,” says the demon. It gets going on everyone, taunting more all the time. Especially vulnerable is Tomas, who feels the pressure of the demon in his head. Angela does her best to distract her daughter, though Pazuzu keeps on talking. The worst is when it calls Angela out for having an abortion, saying she “scraped it out.” The priests and Angela come together telling the demon it is forgiven, hoping to use love against it. But will that work? I’m not so sure.
Bennett takes the pictures he took of the corpses to Cardinal Guillot (Torrey Hanson), as the news flashes about the police finding them in that warehouse. Will this Cardinal help, or is he another of the greasy Roman Catholic Church members in league with Maria Walters and Co? 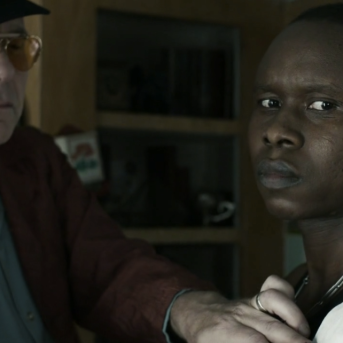 Packing up to take off and hide awhile, Kat, Henry, and Chris argue over what happens next. They’re all on different pages, which is understandable. Even for all they’ve seen, Chris included, there is no rational way to react to the situation. Simultaneously, Casey suffers through the tortures of an exorcism, and Angela has a tough time watching what she’s already experienced so long ago.
Pazuzu makes it back up inside Angela’s mind. He takes her back to that house in Washington, D.C. Down in the old basement where Captain Howdy first spoke to Regan. She sees herself playing with the Ouija. If only she could replay that moment in time, do it all over. The Salesman (Robert Emmet Lunney) returns, little red bird on his shoulder. This scene is written so well. Perfect, in fact. The way the Salesman speaks for Regan, the way he talks to Angela. There’s an incredibly tense bit of dialogue between him and Angela, which they both play impressively.
“Why me? Because you were under my foot, you stupid bitch.”
In the exorcism room things are going just as intense as ever. Angela makes it out of that old place in her head. Just in time to watch the demon start twisting itself into terrifying positions. Then it levitates, the chains break from Casey’s arms. And the evil washes away, as the girl returns to her mother. Have Marcus, Bernadette, and Tomas done away with Pazuzu for good this time? Oh, I wouldn’t get too cocky. Not just yet. 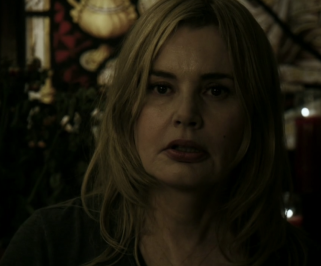 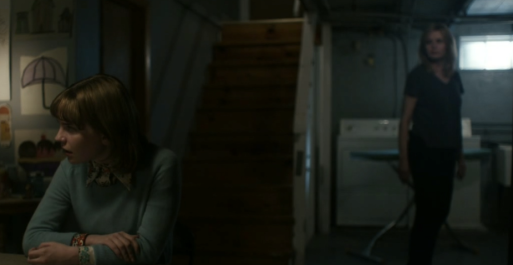 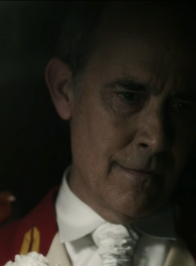 Out Casey goes to an ambulance, the media swarming. Angela prays that her daughter is finally safe from the demon. She and Tomas ride with the girl to the hospital, as police and others look on with proper scepticism, and Bernadette quells the crowd of hungry reporters.
A SWAT team busts in on a derelict apartment. A homeless man, possessed, sits in the dark. Crosses hang upside down from the ceiling everywhere. The man then blows his brains away after asking if they can “hear the angels.” Nasty.
In a bar Marcus and Tomas celebrate, drinking beers together, joking for the first time in far too long. I love these guys, separately and together. Two fascinating characters, well written and well acted. “To standing in the doorway and pushing back the night,” Marcus toasts. Their night ends a little earlier than he’d like when Tomas heads out. ON television we see that there’s a plan to assassinate the Pope, which drives Marcus elsewhere.
Cardinal Guillot and Father Bennett ride in a car together, as the former talks of the Church, and those who are no longer loyal to its goals. Just as I suspected, Bennett is tragically dispatched with a plastic bag over his head. 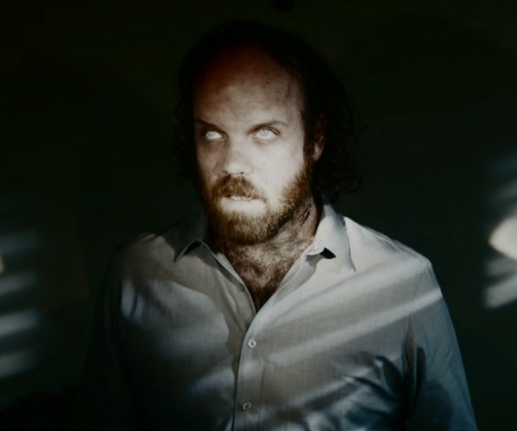 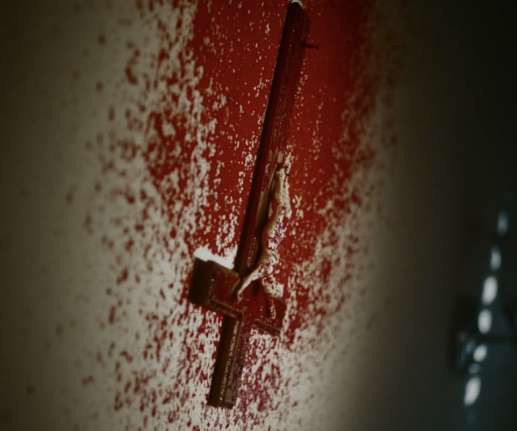 In church, Tomas finds Jessica (Mouzam Makkar) and her husband Jim (Andrew Rothenberg). Oh, that’s awkward. And not good, for anybody. He definitely isn’t pleased. He wants to know all about their affair. Jim says he’ll be reporting Tomas for his indiscretions, devastating both the priest and Jessica. I saw this coming a mile away, though hadn’t anticipated such a wild turn of events all the same. A rough turning point for Ortega.
Father Marcus begins piecing together bits and pieces of what is truly going on involving the possessed homeless. He may be onto something here.
Oh, and back at the Rance house with all the packing there are scarier revelations than anything else. Pazuzu, he found another way to carry on doing his dirty work. He’s made it back into Angela, after all these years. And when she calls her mother Chris a “little stinkpot” like Chris did to Regan back in her youth, grandma MacNeil gets her neck snapped backward, and the demon tosses her down the stairs.
Holy. Fuck.

Another fantastic episode. They, literally, keep on bringing the twists! So unbelievably excited for the two part finale. First up is “162” next. Let’s stay tuned together, and let’s make sure FOX renews this series for at least another season.