After the Kingdom, Rick (Andrew Lincoln) and his fellow Alexandrians searched for Father Gabriel (Seth Gilliam). Only to come across another group entirely.
Meanwhile, King Ezekiel (Khary Payton), Morgan (Lennie James), Richard (Karl Makinen) and some others meet with a few of The Saviors for a pickup. Although the men from Negan’s (Jeffrey Dean Morgan) camp make a fuss, the King assures them all is well. Then a standoff between Richard and one of the idiot Saviors breaks out of nowhere.
“Where do we go from here?” asks Richard. To which his King replies to hand over his gun. A little bit more violence breaks out when the man oversteps his boundaries, then Morgan and Benjamin (Logan Miller) step in until things even out.
Expect things to get more “visceral” eventually, though. On top of everything Morgan’s lost his staff. Back at the Kingdom, Daryl (Norman Reedus) isn’t happy staying cooped up, particularly with everybody just laying down for the Saviors. “You know what they are,” he scolds Morgan, and wishes Carol (Melissa McBride) knew about Glenn and Abraham. Because if so they’d be headed for Negan to kill them all.
And damn, if that isn’t the truth.
One thing I love is that we’ve got guys using bow and arrow, which is only a step from the crossbow Daryl so excellently wielded. Richard and Daryl could prove to become an exciting team.

See, Richard has a plan, and he’s looking for help from Daryl. In his trailer he has weapons. They grab some things then head out to the open road. Note: I don’t say it enough, though everyone who loves the series knows it – the production is all around spectacular, the locations and the props and the cars off the road, they make everything look damn believable.
Turns out that Richard is leading Daryl right to Carol. He’s gone insane wanting to try and turn Ezekiel towards fighting. He wanted to go out there, kill her, use that as a catalyst. Seriously, man? Whoa. In general that’d be horrific, even worse that they had a brief thing together, too. At least Daryl’s there to protect her, while she sits unsuspecting in that cabin.
Daryl: “Anything happens to her, I‘ll kill ya.”
Richard: “I‘d die for the Kingdom”
Daryl: “Then why don‘t you?”
Returning to Rick & Co, they’ve wound up in an odd place. Just as strange as the Kingdom. The Alexandrians are surrounded by people. Led by Jadis (Pollyanna McIntosh). So, she goes back and forth with Rick. Although allowing them to see Gabriel, who looks frightened but no worse for wear. Rick tells Jadis and her group of The Saviors, asking for help to fight. She flat out refuses with a simple, direct “no.” Shit goes sideways. Soon, Gabriel has a woman named Tamiel (Sabrina Gennarino) at knife point. All is well once the former priest talks his, and the Alexandrians’, way out of their predicament. He talks up Rick, the group, their abilities. After awhile they take Rick to the “up up up” where Jadis explains their community, a tad, offering their help if he’s worth their time.

Which means Rick gets tossed into a pit of filthy garbage. Suddenly an insanely medieval-looking walker appears, blades coming out of it everywhere, in the skull and through the torso. He fights against it with whatever he can. And to stop it he has to pierce his own hand with one of the blades. Then, his foot. As Rick struggles, Michonne (Danai Gurira) tells him to use the walls. When he does he gets the zombie down and stabs its brains in with a shard of glass. HARDCORE, BABY! Rick Grimes. All day.
Rick (to Jadis): “Believe us now?”
Their leader wants guns. A bunch. Then they’ll all rally together, fight the good fight.
And as quick as the community gathered, they disappear. Leaving the Alexandrians to their work ahead. There’s a bit of that old cocky Rick still kicking. I think as much as it helps him to be confident, Michonne and the others feel better when they can see he’s level-headed and fighting instead of spaced out and near insane after some of the more devastating moments in their history. Right now, the team are ready for anything.
Carol receives a visit from King Ezekiel and a few of the Kingdom’s residents; even a cobbler from Jerry (Cooper Andrews). She reluctantly takes the delicious treats, beckoning for them all to leave. She’s busy reading, trying to get on with… life. Not long passes and Daryl comes to the door. A crazy emotional moment. The one person she does want to open the door to see, even if Daryl’s sad that she left, to be on her own.
Later on, Rick tells Gabriel “enemies can become friends” (as they themselves did once) and that’s why, in a world with The Saviors pushing their will onto others, he knew that finding Jadis and their community was more an opportunity to find the enemy of my enemy, that kind of thing, y’know? Regardless, this strange community warns that they better receive guns. Soon. Or else. 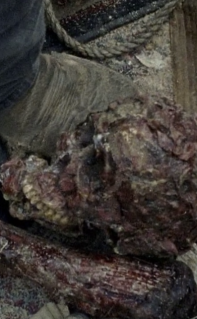 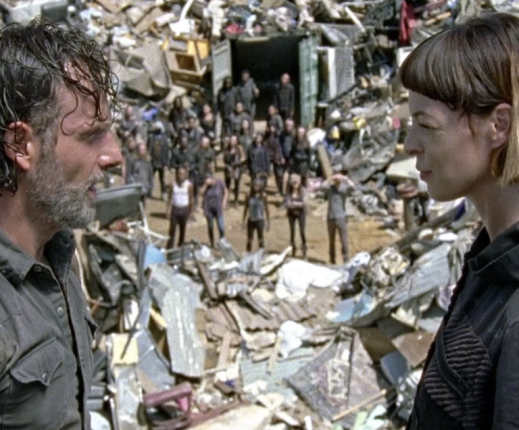 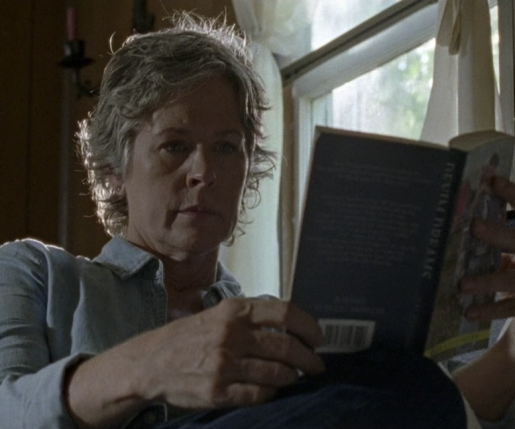 Over in the cabin, Carol tells Daryl she couldn’t kill anyone else, she couldn’t watch anyone else be killed. She then asks if everyone’s okay, if they’re hurt. She almost knows the answer without a word. Only Daryl lies: “Everyone‘s all right.” Oh, Carol’s gonna be mad when she finds out the truth. She will, down the road, because you know she’s not staying out of everything permanently. For the time being, she and Daryl sit together as he eats soup, and life is normal life.
That never lasts long. They know it, so when they get those normal minutes in the day they take them, cherish them. Afterwards, Daryl plans on heading for Hilltop, which he does the next morning. To prepare.
Will the Kingdom come to its senses? Will the addition of another community and the power Jadis wields help convince Ezekiel? Will Rick even get the guns for her?

An awesome chapter in the back half of Season 7! Really loved this episode. Fun, gnarly zombie, Rick being a bad ass, Pollyanna fucking McIntosh! Doesn’t get much better.
Next up is “Hostiles and Calamities” and I bet Negan will return. With a bang.