Dr. Melanie Bird (Jean Smart) sits with therapist Lenny Busker (Aubrey Plaza), who talks with her about her frozen husband. They’re in a dangerous place. Next is Ptonomy Wallace (Jeremie Harris), talking of his mother who died while unloading the dishwasher. Then, Kerry and Cary Loudermilk (Amber Midthunder & Bill Irwin) ruminating on their likeness, their relationship (“Who‘s it hurting?”). Even The Eye (Mackenzie Gray) must have a session with Dr. Lenny.

Syd (Rachel Keller) is the only one to formally question their current reality. But it’s just more medication and off Syd goes back to the halls of the institution in which they’re all patients. In the lunge, Ptonomy and David (Dan Stevens) talk about a drooling, near comatose patient sitting in a wheelchair across from them.

Continually we see Syd knows something isn’t right, she sees a different door than usual in one of the hallways. Yet nobody else does, and the more she tries to alert them the further Dr. Lenny meddles. And David, he’s sucked into that little world. Far too much.

At dinner, Amy (Katie Aselton)— a nurse in their facility— won’t let David have any pies. “It‘s just pie,” he quips when Syd offers not to eat in solidarity. Her next bite is filled with insects, swarming. Only it isn’t. But we’ve seen that before, right? Another sign of that Devil with the Yellow Eyes. If that weren’t enough we focus on the pie, as Lenny’s face is revealed in a nice cross-fade. Before a fun musical number with her edited in various ways across various places in David’s mind. Love the visuals of this series as a whole. And Lenny is the perfect chaotic embodiment of the mess going on inside David.
Legion gets Father Gore’s vote for one of the most visually exciting TV shows of all time.

“You ever have that feeling like something‘s happened before,
except differently?”

David and Syd talk about their life in that hospital. He’s not keen on getting out because of his prior experiences. He can’t handle real life. Although what he knows, or thinks he knows there with Dr. Lenny, it’s all a lie. Syd knows this, and she doesn’t want to stay. She keeps on having a dream— about the moment before they wound up in that place. Creepy. Cary and Kerry, Ptonomy, Dr. Bird, David, they’re convinced in a need for treatment. But Syd keeps pushing.
And The Eye never stops sneaking, watching.

In the night, Cary sees that place Oliver showed us. Just beyond consciousness. Cary reaches out for it then everything around him disappears. Then he’s in a forest of stars. Across from him someone in an old diver’s outfit, like Oliver. But is it him? Or someone more sinister?

Syd begins to articulate to David that the facility they’re in may be a “version of reality” and not anything concrete. He insists it’s part of her psychosis, why she’s in there, maybe. He says she’s delusional. That he isn’t schizophrenic. It confuses her completely. Again, something isn’t quite right. She comes across a strange, soft spot in the wall. Blood leaks out. Triggering memories, all sorts. They flood back to her relentlessly. Afterwards, Dr. Lenny turns up offering some music therapy, a nice pair of headphones. And once more Syd is subdued, thrown off track. She floats on to the sound of crickets.
When Kerry goes to find Cary she only finds The Eye, being utterly terrifying. Worse, she doesn’t know where her other half is gone. 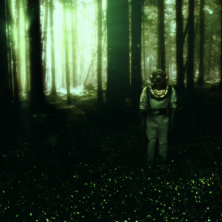 David has a run in with his sister Amy, the nurse. She tells him he isn’t wanted there. Nobody likes him. “You‘re a freak, you‘re disgusting,” she says. Then she gags and gags and gags without actually throwing up. Wow, that’s more unsettling than I’d have thought! And the mindgames, good lord. Poor David is being thrashed mentally. The closest person to him, his blood, telling him he’s revolting. That’s deep, sharp, and awful.

In her room Melanie sees Oliver. Or, someone in the diver’s suit. I worry for her, she seems particularly fragile out of the group. Then she follows the diver through a wall into a tunnel— at its end a flashing light. Further on she goes, in past a locked door, and this leads her down to a dark place. We see the moments before they were transported to that hospital. Bullets in mid air, frozen. She can’t piece it together. The diver points, suggesting she change the course of events.
Yet always watching are the eyes of Dr. Lenny.

Speaking of, she tries convincing David that Syd isn’t the “right girl” for him. She has a grim conception of love, which he believes he has with Syd. She has a lot to say about power. And that it is in itself the entire point of life.

Dr. Lenny drops a bomb, too: she knew David’s father. Whoa! “I found you,” she taunts menacingly. Furthermore, the Devil with the Yellow Eyes wants to merge their powers. It needs the physical form. Later on, Syd gets a visit in her trance-like state from a man in a diver’s suit: Cary himself.

LOVED THIS EPISODE TO DEATH! Jesus. Only gets better with every chapter. There were so many wild things happening here, and the story’s various strands twist together so well. A ton of great acting on top of all the solid writing. What a series. Already renewed for Season 2. Even a bit of David Bowie at the end of this episode— fucking sweet.