Norman (Freddie Highmore) is being booked into the police station, going through processing. Well, Mother (Vera Farmiga) is there, too. Love the excellent use of the idea of the double personality. How we see both Mother and Norman in the frame at once, as others only see the latter. Mother’s not happy to hear about the next steps, that her boy is likely headed to jail. Sweet, young Norman wouldn’t do well behind bars.
Emma (Olivia Cooke) and Dylan (Max Thieriot) are finally back together. She didn’t want him to be alone dealing with all the madness. Now, she also discovers her mother is dead, dredged from the lake. Murdered. And Dylan knows “it was Norman.” It’s not just the fact her mom is dead. It’s the fact Emma lived there in White Pine Bay, being around Norman and Mother so long, and she had no idea that this budding psychopath lurked in his skin. That one day he would do something so horrible. Such a feeling of deception, a truly deep betrayal.

The Bates Motel is a scene of massive interest, various law enforcement teams searching the grounds, metal detectors, crime scene investigation. Sheriff Jane Greene (Brooke Smith) and a team are inside the eerie house, where Mother’s room remains untouched, and obviously her son’s been sleeping in her bed like a creep. A veritable house of horrors, if there ever were one. Outside they find luggage belonging to Audrey Decody, Emma’s mother. Downstairs, there’s poor Chick (Ryan Hurst), shot in the head by the still fleeing jailbird former Sheriff Alex Romero (Nestor Carbonell).
Speaking of Alex, he’s like a man with nothing at all whatsoever to lose. No telling what his next move is, part of the fun.
Meanwhile, Emma reels from the news about her mother, about Norman. I also feel bad for Dylan because, despite his own troubles and mistakes, he never wanted any of this, for himself or Emma. “You didn‘t bring Norman into my life,” she tells him. Things between the two of them aren’t easy, and she isn’t sure what this means for their relationship.
Lawyer Julia Ramos (Natalia Cordova-Buckley) visits with Norman/Mother. They speak of the coming trial, what he/she ought to expect. They have to discuss their “approach.” Y’know, keeping Norman alive. She wants to go for an insanity plea. Love this sequence, too. The editing cuts us from Mother speaking to Norman taking over. There’s a real battle happening inside that one body.
Norman: “Everyone has multiple personalities, Julia. We pull out what we need when we have to.” 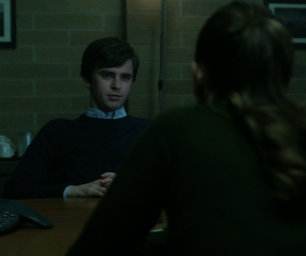 The trouble between Dylan and Emma is compounded by the fact Julia wants him in court to sit behind Norman, to support his brother. It’s very difficult for him to turn his back. Not that a serial killer deserves sympathy. But this is the enjoyable part of this Psycho adaptation, is that Norman isn’t only this disturbed killer, we’ve seen a much more expanded, complex vision of who Norman Bates is and how he reached this destination. Because slashers are great, I personally love them.
But Bates has always been a more interesting character than a slasher; Hitchcock’s film and Peeping Tom from Michael Powell gave birth to the genre. He’s had more to him even in the little we get to see his psychosis through Hitchcock. Which is why I think Bates Motel is a worthy piece in the makeup of Norman Bates as a character, as it doesn’t squander the prequel. It does the story and the characters justice.
Alex is still out on the run. He gets gas and runs into a man interested in the late ’60s-era car he’s driving. Just a friendly thing, but enough to fuel more paranoia for a man escaping the law. And everywhere he goes he’s still reminded of Norma, the fact that Norman is a killer, so on.
In court, Dylan shows up to support his brother regardless of the trouble it causes; hard to turn your back on family, particularly the crazy ones. A preliminary hearing. First up is Sheriff Greene on the stand, who talks about the murder of Blackwell, as well as Sam Loomis and Emma’s mother. To see Norman listen to the recounting of his crimes along with others, probably the first time he’s actually faced them, it’s chilling. Now we’re seeing people heap blame on Dylan, for knowing there was something deeply wrong with his brother and not doing something about it. That’s unfair as a judgement.

Emma says goodbye to her mother in a quick cremation ceremony. She brings the ashes out to the woods and scatters them on the open air. Sort of a fitting tribute for a woman who so obviously lived a travelling lifestyle, away from her family. Sweet, but definitely simultaneously bitter. She and Dylan keep putting their best foot forward together, though it’s unclear how well that’ll work in the long run.
Before leaving Emma goes to visit Norman. It’s a painful thing, as he puts on his best act. Although it’s all but clear Mother is operating the controls for that conversation. Not accepting the blame, the best defence. And Emma knows, she asks: “Where‘s Norman?” Then the conversation shifts with Mother talking directly to her. Ah, the psychosis is so very evident, in full view for the first time for her.
Not long later Alex puts a gun to Julia in the parking lot, pushing his way inside the station. Closer to Norman. He puts everyone at gunpoint, making the officers hug the floor. He takes things slow, being careful, disarming them. Another officer shows up and gets a bullet to the shoulder.
Romero gets to the cell, then Norman is taken out as the officers are locked inside. He almost chokes the young man to death before letting go. He piles himself, Norman, and Regina into a car, then they’re headed to wherever the son put Mother’s body. Shiiiit. 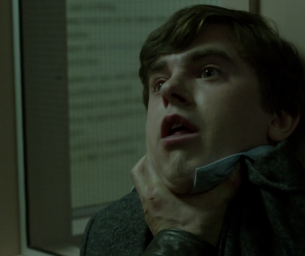 What a spectacular penultimate episode to this series! Wow. I’m consistently amazed by this series, and now and then it really takes me for a perfect ride. I think Season 5’s been my favourite of all, honestly. They’re swinging for the fences and producing the best Norman Bates prequel that they could have done. Last episode is “The Cord” and I believe that’ll be in reference to the cord connecting Mother and Norman, the figurative umbilical cord still attaching the boy to his mom? Maybe. We’ll see.